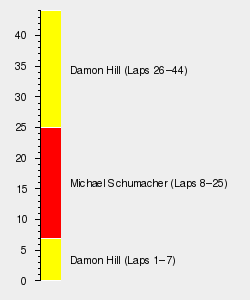 The 1998 Belgian Grand Prix, otherwise known as the LVI Foster's Belgian Grand Prix, was the thirteenth round of the 1998 FIA Formula One World Championship. Held at Circuit de Spa-Francorchamps on the 30th of August in heavy rain, it was won by Damon Hill for Jordan-Mugen-Honda. It was Hill's last win in Formula One, and a first ever Grand Prix win for the Jordan team.

It was involved with a multiple crash after the 1st corner with many drivers involved. Some of them restarted, and some of them did not restart.

Following Hungary, a week of testing occured at Monza in preparation for the Belgian Grand Prix with Ferrari, McLaren and the resurgent teams of Williams and Jordan in action.

The full entry list for the 1998 Belgian Grand Prix is outlined below:

The biggest incident of the day was when Williams driver Jacques Villeneuve flew off the circuit at Eau Rouge and flew into the barriers destroying his car. Despite the enormity of the incident, Villeneuve was able to walk away from the incident unscathed. He finished the session in sixth place behind teammate Heinz-Harald Frentzen.

The Benetton team suffered technical difficulties throughout the day, their drivers Giancarlo Fisichella and Alexander Wurz could only manage eleventh and twelfth in the session.

The Saturday practice session saw Mika Häkkinen dominate the timesheets. Despite going quickest throughout the session, Häkkinen was not immune to the difficulty of the Belgian circuit. In the dying minutes Häkkinen spun off the circuit and into the gravel trap, bringing his session to a premature end. David Coulthard was second fastest ahead of Jacques Villeneuve and Damon Hill.

The Saturday practice session saw another enormous accident, Mika Salo slammed his Arrows into the barriers destroying his car, he walked away unscathed despite being adminstered to hospital for a precautionary check-up.

The full practice results for the 1998 Belgian Grand Prix are outlined below:

The cars came out on track almost immediately, the two Ferrari's of Eddie Irvine and Michael Schumacher were the first of the front runners to go out with Mika Häkkinen following suit. Häkkinen set the early pace ahead of Irvine, Damon Hill and Jacques Villeneuve.

Michael Schumacher then improved to go into second whilst Hill moved into third position. Heinz-Harald Frentzen then moved into fourth, setting the initial pace for Williams.

David Coulthard was the last of the front runners to come out of the pits, setting a strong lap time to take the provisional pole time.  Schumacher attempted to respond but was forced to abort his next hot lap after making a mistake. Hill then moved into provisional third, bumping Schumacher down to fourth.

Michael Schumacher attempted to respond to the McLaren's time, however going into Blanchimont, the Ferrari driver was forced to slow due to yellow flag's due to Alexander Wurz stopping out on circuit. Despite this, Schumacher went fast enough to reclaim third from Damon Hill.

Eddie Irvine was struggling in the session, whilst on a quick lap going into the Bus Stop Chicane, Irvine was held up by the Tyrrell of Ricardo Rosset. Irvine flying over the kerbs in order to avoid Rosset's slow Tyrrell destroying his lap time.

In the dying seconds of the session Mika Häkkinen reclaimed the pole position ahead of teammate David Coulthard, Damon Hill then improved to go third fastest ahead of Michael Schumacher, Eddie Irvine and Jacques Villeneuve.

The full qualifying results for the 1998 Belgian Grand Prix are outlined below:

The full grid for the 1998 Belgian Grand Prix is shown below:

The race would be held in extremely wet conditions, conditions that naturally suited the Ferrari of Michael Schumacher.

As the cars left the grid, Jacques Villeneuve got a phenomenal start moving up into second position. Eddie Irvine did well to move into third ahead of Schumacher whilst David Coulthard had a terrible start dropping to fifth from second. It was about to get a whole lot worse for Coulthard when coming out of the first corner, he lost control of his car slamming into the barriers then rebounding onto the circuit into the path of the oncoming cars. Unable to avoid the out of control McLaren, the cars then piled into Coulthard causing a chain reaction of collisions down the field as nearly the entire field was wiped out in an enormous accident. Aside from Coulthard, Eddie Irvine, Alexander Wurz, Rubens Barrichello, Johnny Herbert, Olivier Panis, Jarno Trulli, Mika Salo, Pedro Diniz Toranosuke Takagi, Ricardo Rosset, Shinji Nakano and Jos Verstappen were all caught up in the accident.

Verstappen was able to drive his crippled Stewart back to the pits, but all the other driver's were eliminated on the spot, their cars well and truely wrecked. The race was unsurprisingly stopped in order to clear away the twelve car wreckage of the start. Eddie Irvine was notably limping on his way back to the pits whilst Rubens Barrichello nursed his arm, blood had visibly soaked through his overalls near his right shoulder.

Aside from Barrichello, Mika Salo, Olivier Panis and Ricardo Rosset would not take the restart, their cars wrecked in the accident and their teammates getting the spare car the three driver's were unable to continue to take part.

Eventually the carnage was cleared and the eighteen surviving cars took the re-start. The rain had not subsided and the second start would be held in similar torrential conditions to the first start.

On the re-start, Damon Hill got a phenomenal start taking the lead into the first corner, Michael Schumacher attempted to overtake Mika Häkkinen around the outside but instead Häkkinen spun his car right into the oncoming field. Johnny Herbert had nowhere to go and crashed into the McLaren driver, but all the other drivers were able to avoid the stricken cars of Häkkinen and Herbert. Both cars were eliminated from the race, for Häkkinen this was a devastating blow for his championship ambitions.

Up front Irvine had made another strong start to move into second but then conceded the position back to teammate Schumacher going into Raidillon. Coulthard who had made another poor start was then rammed from behind by Alexander Wurz's Benetton, the two cars spinning into the gravel trap. Wurz was eliminated from the race whilst Coulthard was sent to the back of the pack.

The incidents of the first lap saw the race officials bring out the safety car to clear away the debris. Under the safety car it was Hill leading Schumacher, Irvine, Jean Alesi, Villeneuve and Heinz-Harald Frentzen.

On lap three the racing got underway and Hill sprinted away into the lead ahead of Schumacher. Villeneuve then managed to overtake Alesi going into the first corner for fourth place. A few corners later Frentzen had also overtaken Alesi.

Giancarlo Fisichella then spun dropping a position to eighth behind Ralf Schumacher's Jordan.

Villeneuve then made a mistake going into the bus stop chicane, losing positions to Frentzen and Alesi. Meanwhile up front Schumacher began to close the gap and apply the pressure to Hill's Jordan. Eventually on lap 8, Schumacher was able to overtake to take the lead of the race. The same lap saw Jos Verstappen retire with an engine failure.

The race then began to intensify, Eddie Irvine whilst chasing down Damon Hill then spun his car colliding with the barriers at Fagnes, Irvine losing his front wing and bargeboards. Irvine drove his crippled car back to the pits for repairs, rejoining the race in eleventh position. The same lap saw David Coulthard pit from eleventh to move into the full wet tyre from the intermediate.

Toranosuke Takagi then spun into the barriers at the first corner, bringing an end to his day. Lap eleven saw Ralf Schumacher come into the pits from sixth position for full wet tyres.

Frentzen then spun off the circuit at Stavelot, allowing Jean Alesi to take third position.

Lap 14 saw the two race leaders of Schumacher and Hill come into the pits for full wets followed by Alesi, Frentzen and Fisichella. Villeneuve who was still on the intermediate tyres in the continually deteoriating conditions then spun off the circuit going down the kemmel straight. Villeneuve's car significantly damaged was forced to stop.

Ralf Schumacher was now up to third position behind teammate Damon Hill, having made the early decision to come in for full wets.

At the front, Michael Schumacher was consolidating an enormous lead, however disaster was to strike on lap 25. Schumacher coming around to lap the McLaren of David Coulthard slammed into the back of Coulthard as the McLaren driver slowed to allow the leader through. In the wet spray Schumacher did not see Coulthard collided with the back of the McLaren ripping the front right wheel off.

Schumacher drove his crippled three wheeled car back into the pits and out of the race. Coulthard also came into the pits, his rear wing ripped off in the incident with Schumacher. Schumacher feeling angrily and agrieved following his accident with Coulthard, stormed down the pits and into the McLaren pit lane in an effort to get to Coulthard. His own Ferrari mechanics as well as the McLaren mechanics barring his way to his confrontation with Coulthard. After being unable to get to Coulthard, Schumacher stormed back to his own pit-box close to tears.

More bad news for Ferrari when the sole running car of Eddie Irvine spun off the circuit whilst trying to apply pressure to Heinz-Harald Frentzen's Williams.

Ralf Schumacher then came in for his second pit-stop in the race, a lap later race leader Hill came into the pits. Fisichella then collided at full speed with Shinji Nakano's Minardi going into the bus stop chicane. Fisichella ripping the entire left hand side pod off his car, leaving fire spurting from the side of his car. Fisichella exited his wrecked car without injury as Nakano crept back to the pits in his crippled Minardi.

The safety car was then brought out for a second time following Fisichella's accident. Following the second safety car only six cars remained in the race with Hill leading Ralf Schumacher, Alesi, Diniz and Jarno Trulli. During the safety car period, David Coulthard was brought back out on track, his car sufficiently repaired albeit rejoining multiple laps down. The following lap, Minardi brought Shinji Nakano back onto the track.

The final laps saw little action, Ralf Schumacher was commanded by his team to hold station behind teammate Damon Hill and maintain the one-two finish for the Jordan team. Hill brought his car home to take his first victory since his win in Japan with Williams in 1996. Ralf Schumacher was second to take Jordan's first ever win and their first ever one-two finish. Jean Alesi came home to take his first podium of the season with Heinz-Harald Frentzen fourth, Pedro Diniz fifth and Jarno Trulli taking Prost's first points of the season.

The full results for the 1998 Belgian Grand Prix are outlined below: