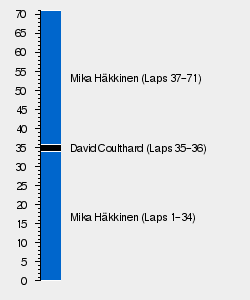 The 1998 Austrian Grand Prix was the tenth round of the 1998 season. After a bizarre wet qualifying session which saw Giancarlo Fisichella claim his first pole position the race saw Mika Häkkinen lead a 1-2 finish for McLaren-Mercedes.Mika Häkkinen's championship rival Michael Schumacher was third in the race.

Following the British Grand Prix, the teams headed to Monza for a week of testing before making the move to Austria for the Austrian Grand Prix. Shortly before the Austrian race, Michael Schumacher confirmed a deal with Ferrari which would see him remain with the team until 2002. Despite offers from McLaren to join their team in 1999, Schumacher made the long term committment to remain with Ferrari.

Following the Schumacher announcement, it was announced that Jacques Villeneuve would be leaving Williams at the end of 1998, to join fledgling team BAR in 1999.

Austria would be the home race for Benetton driver Alexander Wurz.

Home talent, Alexander Wurz was sixth at the end of the session. Ferrari appeared off the pace with Michael Schumacher and Eddie Irvine seventh and eighth. Their day was not as bad as Williams's, Jacques Villeneuve was thirteenth whilst teammate Heinz-Harald Frentzen finished in seventeenth following a spin into the gravel trap.

David Coulthard once again led the timesheets ahead of teammate Mika Häkkinen. Eddie Irvine was third ahead of Frentzen, Schumacher and Jean Alesi.

The Austrian Grand Prix brought the first wet qualifying session of the season. The circuit was drenched and the driver's were unwilling to make it out on track with the rain. 28 minutes into the session Toranosuke Takagi and Damon Hill were the first driver's to enter onto the circuit. In the wet conditions Takagi spun 360 de grees going into turn 8, Takagi continued without isssue. Following his first flying lap, Takagi then spun his car going into the first corner, the Tyrrell driver lightly clouted the barrier but once again was able to continue on.

After completing two flying laps, Damon Hill returned to the pits. As Hill exited the track, Jos Verstappen in the Stewart entered the circuit. Following this, the cars began making their move onto the race track. Eddie Irvine was the first of the front runners to enter the track with Michael Schumacher following him onto the circuit.

After completing his first flying lap, Verstappen went wide and into the gravel going into turn 1. Immediately afterwards Pedro Diniz went wide at the same place going into turn 1. Michael Schumacher then went faster to dislodge Hill's provisional pole time. Ralf Schumacher in the second Jordan then went second fastest before immediately being dislodged from second by Heinz-Harald Frentzen.

Jacques Villeneuve then spun into the gravel trap at turn 3, being forced to exit his car. Schumacher then bettered his own provisional pole time. Ricardo Rosset and Giancarlo Fisichella then both suffered their own spins. Coulthard and Häkkinen then improved to go third and fourth. Coulthard then moved into second, but still was unable to beat Schumacher's time.

Fisichella then improved his time to go third fastest. As the session came to a close, the sun began to shine and the track began to dry. Shinji Nakano then spun and stalled his Minardi. Frentzen then improved to go second fastest despite making yet another mistake during the lap. Fisichella then suffered another big spin but yet again was able to continue without major damage. Ralf Schumacher then improved to move into second position.

Olivier Panis was another driver to suffer going wide into the first corner. Rubens Barrichello then put in a strong lap to go third fastest with Verstappen right behind. Alesi then moved into second position. Mika Salo then went fifth fastest before Barrichello moved up to third. Häkkinen then improved to take fourth position, before to everyone's amazement Alesi took the provisional pole time. Häkkinen then went faster than Schumacher to go into second.

On Fisichella's final flying lap, he managed to take the pole position as the session came to a close. The result meant that Fisichella took his first pole time ahead of Alesi, Häkkinen, Schumacher, Barrichello and Salo. Frentzen was seventh followed by Irvine, Ralf Schumacher and Panis. Villeneuve was a disgruntled eleventh whilst Coulthard was in a disastrous fourteenth position.

Unlike qualifying, the race would be held under sunny conditions. The start saw Mika Häkkinen move into the lead, whilst Michael Schumacher also managing to get past pole sitter Giancarlo Fisichella to move into second. Jean Alesi made a poor start, dropping to fifth behind Rubens Barrichello.

Olivier Panis failed to make it off the grid, retiring with a clutch failure. At the back, Toranosuke Takagi lost control of his car heading into turn 1, spinning into the corner and colliding with Shinji Nakano. Johnny Herbert and Esteban Tuero were also forced wide off the circuit to avoid the accident. Nakano continued, but Takagi suffered terminal damage to the rear of the car.

Going into turn 3 there was further carnage, the two Arrows cars of Pedro Diniz and Mika Salo collided. Salo, spinning into the unfortunate David Coulthard and taking off his front wing. Jacques Villeneuve who was also obstructed by the incident, found himself at the back of the pack as well.

Following these incidents, the safety car was brought out to clear away the debris. Coulthard and Salo struggled back to the pits, Coulthard for a new front wing whilst Salo headed for retirement. Diniz would also retire due to damage, two laps later.

When racing resumed on lap 3, Häkkinen found himself under pressure from Michael Schumacher. Going into turn 4, Schumacher made a lunge around the outside but could not make the move stick, going wide he lost a position to Fisichella's Benetton. Going into turn 8, Alexander Wurz made a move on Jos Verstappen for twelfth, however he succeeded in only going wide into the gravel trap losing multiple positions. The following lap Wurz came into the pits for repairs.

The following lap, Schumacher went for the overtake on Fisichella into turn 4, this time making it stick and reclaiming second position. Häkkinen and Schumacher then began a close duel, Schumacher lapping faster continually made manoueveres but each time he was covered by Häkkinen.

On lap 8, Barrichello came into the pits for retirement, a disappointing result considering he was running in fourth place. With Barrichello's retirement, Eddie Irvine inherited fourth following his overtake on Alesi's Sauber.

Coulthard in the second McLaren had began making progress through the back of the field, on lap 12 he made his overtake on Damon Hill for eighth. On lap 15, Schumacher went wide into the final corner and onto the gravel, his car bounced through the gravel trap ripping off his front wing. Schumacher was forced to struggle around for a whole new lap before he was able to come into the pits for repairs. A lap later Heinz-Harald Frentzen retired from sixth with a major engine blow-up.

On lap 20, Fisichella came into the pits for his first stop, he exited the pits just behind Alesi's Sauber. Going into turn 3, Fisichella attempted to take fourth from the Sauber driver, but Alesi closed the door. The two drivers collided and retired from the race.

This carnage enabled Coulthard to move into third place behind Irvine and teammate Häkkinen.

Lap 30 saw Tuero spin off the circuit and into retirement.

Villeneuve then went off the circuit whilst trying to overtake Jarno Trulli's Prost for fifth position, Villeneuve however managed to maintain his position. Trulli led a train of cars with Villeneuve, Michael Schumacher, Herbert and Hill following close behind. Häkkinen coming up to lap this battle opted to head into the pits for his first stop in order to not get stuck behind this traffic. This allowed Coulthard to take the lead, two laps later he came into the pits relinquishing the lead back to Häkkinen. Coulthard exiting the pits in a comfortable second position.

Lap 51 saw Jos Verstappen retire, suffering a major engine failure and spinning out on his own oil. As this occurred, a battle between the Schumacher brothers began with Michael harrying brother Ralf. Two laps later Michael was able to overtake Ralf and move into fourth position.

Häkkinen took a dominant victory ahead of teammate Coulthard. The two Ferrari's of Schumacher and Irvine were third and fourth with Ralf Schumacher finishing fifth ahead of Jacques Villeneuve.