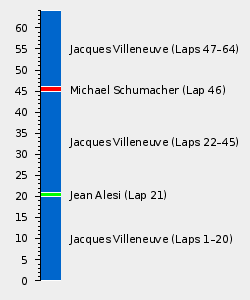 The 1997 Spanish Grand Prix, otherwise officially known as the XXXIX Gran Premio Marlboro de España, was the sixth round of the 1997 FIA Formula One World Championship, staged on the 25 May 1997 at the Circuit de Catalunya near Barcelona, Spain.[1] The race would see Jacques Villeneuve secure his third win of the season to reclaim the Championship lead, in a race dictated by tyre use.[1]

Villeneuve had started the weekend with another minor win, beating Williams-Renault teammate Heinz-Harald Frentzen to pole position during qualifying.[1] Best of the rest was David Coulthard in third, a second off of Villeneuve's effort, with Jean Alesi sharing the second row with the Scot.[1]

The start would see Villeneuve bolt into an early lead, while a poor start for Frentzen saw the German racer tumble down the field.[1] As he tumbled his compatriot Michael Schumacher surged forward, ending the opening lap in second as the closest thing to a challenge to Villeneuve.[1]

Yet, even Schumacher could not match Villeneuve's early pace, with the Canadian racer quickly building a twenty second lead.[1] Indeed, Schumacher's pace was soon found to be so poor that he had a queue of cars behind him, with Coulthard, Alesi, Mika Häkkinen, Frentzen and Johnny Herbert all stuck behind the #5 Ferrari.[1]

Tyre wear was to come into play soon after, with a fair number of the Goodyear shod drivers opting for a three stop strategy.[1] That played a significant part in breaking up Schumacher's train, with the German racer soon slipping down behind Herbert.[1]

In the resulting shuffles it was Olivier Panis who emerged best, his Bridgestone tyres proving longer lasting and able to run at a quick pace.[1] Indeed, after Villeneuve completed his second stop the Canadian looked vulnerable to the now second placed Frenchman, although the Prost-Mugen-Honda would constantly get mired in traffic.[1]

Elsewhere, Schumacher's pace picked up during his second stint, allowing him to briefly lead on his two-stop strategy before falling back into line behind Alesi in third.[1] Herbert, meanwhile, would jump both McLaren-Mercedes after his second stop, while Frentzen tumbled to eighth lacking any confidence in his tyres.[1]

Out front, meanwhile, Villeneuve would cruise across the line to claim victory, Panis' impressive pace not enough to threaten the Canadian.[1] Alesi duly completed the podium ahead of Schumacher, while Herbert and Coulthard claimed the remaining points.[1]

Michael Schumacher moved to the top of the Championship after his first win of the season, moving four clear of former leader Jacques Villeneuve. Eddie Irvine was next, leaping up to third ahead of Heinz-Harald Frentzen, with the German racer still level with four other drivers on ten points. Behind that cluster came Olivier Panis, while Rubens Barrichello had shot into to top ten with his podium finish.

In the Constructors Championship it was Ferrari who ended the day at the head of the hunt, establishing an eight point lead. Williams-Renault had made way for them, continuing their run of race win or retirement, while McLaren-Mercedes had likewise lost ground in third, slipping eighteen off the lead. Benetton-Renault were next ahead of Prost-Mugen-Honda to complete the top five, with nine constructors on the board.

The full entry list for the 1997 Spanish Grand Prix is outlined below:

The full qualifying results for the 1997 Spanish Grand Prix are outlined below:

The full results for the 1997 Spanish Grand Prix are outlined below:

A third win of the campaign carried Jacques Villeneuve back to the top of the Championship standings, the Canadian ace leaving Spain with a three point lead. Michael Schumacher had made way for Villeneuve and slipped to second, while Olivier Panis rocketed up to third, although he only had half the number of points of Villeneuve. Eddie Irvine and David Coulthard completed the top five, with fifteen drivers on the score sheet.

In the Constructors Championship Ferrari had just held onto their lead, although it had been cut to just a single point. Williams-Renault were the team to do the damage, ending the weekend on 40 points, with almost double the number of points of McLaren-Mercedes in third. Behind McLaren were Benetton-Renault and Prost-Mugen-Honda, the only other teams in double figures after the opening third of the season.

Retrieved from "https://f1.fandom.com/wiki/1997_Spanish_Grand_Prix?oldid=89242"
Community content is available under CC-BY-SA unless otherwise noted.