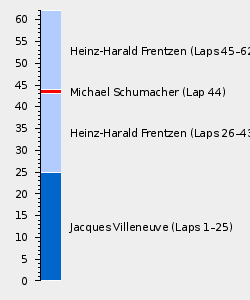 The 1997 San Marino Grand Prix, otherwise known as the 17° Gran Premio di San Marino, was the fourth round of the 1997 FIA Formula One World Championship, staged at the Autodromo Enzo e Dino Ferrari in Imola, Italy, on the 27 April 1997.[1] The race would see Heinz-Harald Frentzen secure a maiden victory at the wheel of his Williams-Renault, fending off a late challenge from compatriot Michael Schumacher.[1]

Frentzen had impressed during qualifying, daring the challenge Championship leading teammate Jacques Villeneuve for pole position, although it would be a battle won by the Canadian.[1] Third would go to Schumacher as usual, ahead of Olivier Panis, with the two Jordan-Peugeots of Ralf Schumacher and Giancarlo Fisichella sharing the third row.[1]

Rain would make the warm-up a wash-out on race day, although as the start time approached the clouds drifted away and the circuit dried.[1] There would also be some late changes to the grid, with Jarno Trulli suffering a gearbox failure on the formation lap, while Damon Hill had to start from the pitlane.[1]

Incredibly the start at Imola would be the first of the season not to feature a major collision, with Villeneuve sprinting clear of Frentzen.[1] Indeed, Frentzen's start was not among the best, and hence left him vulnerable to an aggressive lunge by Schumacher into Tosa.[1]

With Schumacher up into second Villeneuve was left to blast clear at the head of the field, with the German racer simply unable to match his pace.[1] The only man who looked likely to challenge the Canadian was his teammate, although Frentzen simply could not find a way past the #5 Ferrari.[1]

Indeed, it was only when Schumacher made a rare mistake that Frentzen finally got a chance to attack, the German racer sliding wide at Variante Alta.[1] Frentzen, however, contrived to get on the wrong side of the Ferrari and slide onto the grass, hence allowing Schumacher to retain second.[1]

That seemed to awaken Schumacher, who was able to match Villeneuve's pace from that moment on, although the Canadian's pace was being hampered by lapped traffic.[1] However, Schumacher's hopes of victory essentially disappeared after his stop on lap 24, with Frentzen setting a stunning series of fastest laps to try and overcut his compatriot.[1]

The plan worked, just, for a quicker stop for Schumacher had ensured that Frentzen had to battle the Ferrari as he rejoined.[1] Regardless, Frentzen duly seized the advantage and began to ease away, while Villeneuve had slipped down behind the pair of them, almost unnoticed.[1]

Villeneuve's race was to end completely soon after, a gearbox failure dumping him out of the race having tried his best to get ahead of Schumacher.[1] With that the race for the win was over, with Frentzen able to keep Schumacher at arm's length through to the chequered flag.[1]

Behind them to complete the podium would be Eddie Irvine, who picked his way up the order as others hit trouble ahead of him.[1] Giancarlo Fisichella was next, having battled Irvine throughout, with Jean Alesi and Mika Häkkinen claiming the remaining points after quiet afternoons of their own.[1]

Jacques Villeneuve established a ten point lead atop the Championship after his second win of the season, leaving Argentina with twenty points to his name. David Coulthard therefore slipped to second, level with Gerhard Berger, although the Scot was ahead of the Austrian courtesy of his win in Australia. Mika Häkkinen and Michael Schumacher completed the top five, with eleven scorers after the opening three rounds.

Williams-Renault moved to the top of the Constructors Championship after Villeneuve's second win of the campaign, establishing a one point lead over McLaren-Mercedes. A five point gap then followed before Ferrari appeared in third, with Benetton-Renault ending the day down in fourth. Prost-Mugen-Honda, Jordan-Peugeot and Sauber-Petronas were the only other scorers.

The full entry list for the 1997 San Marino Grand Prix is outlined below:

The full qualifying results for the 1997 San Marino Grand Prix are outlined below:

The full results for the 1997 San Marino Grand Prix are outlined below:

Heinz-Harald Frentzen shot into the top three after his maiden victory, leaving San Marino four behind compatriot Michael Schumacher, who had himself moved into second. However, both were still a fair way shy of early Championship leader Jacques Villeneuve, with the Canadian ace holding a six point lead over Schumacher with a quarter of the season gone. Behind, David Coulthard was level with Frentzen on ten points and a win, while Eddie Irvine, Gerhard Berger and Mika Häkkinen also having claimed ten points.

In the Constructors Championship it was Williams-Renault who once again ended a race weekend on top, moving onto 30 points with three race wins. Ferrari had moved into second, six behind the Anglo-French alliance, while McLaren-Mercedes slipped to third, ten off the lead. Benetton-Renault were next ahead of Jordan-Peugeot, while Prost-Mugen-Honda and Sauber-Petronas completing the score sheet.

Retrieved from "https://f1.fandom.com/wiki/1997_San_Marino_Grand_Prix?oldid=84674"
Community content is available under CC-BY-SA unless otherwise noted.