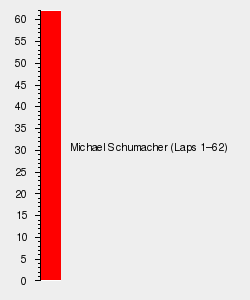 The 1997 Monaco Grand Prix, officially known as the LV Grand Prix de Monaco, was the fifth round of the 1997 FIA Formula One World Championship, staged at the Circuit de Monaco in Monte Carlo, Monaco, on the 11 May 1997.[1] The race would see Michael Schumacher sweep to victory, in a race that celebrated the 700th anniversary of Monaco's foundation as an independent nation.[1]

Qualifying would see Schumacher almost secure pole position, only for Heinz-Harald Frentzen to beat his early effort to secure top spot.[1] Schumacher himself made a mess of his final run and had to settle for second, while Championship leader Jacques Villeneuve lined up in third.[1]

Rain on race morning ensured there was confusion on the grid, with teams having to decide on whether to adopt a wet or dry setup.[1] The two Williams-Renaults would ultimately stick with a fully dry setup, Ferrari and Schumacher gambled on a wet setup, while the Jordan-Peugeots and David Coulthard opted to take intermediate tyres.[1]

Ultimately it was those who opted for wet/intermediate setups and tyres that made the best starts, with Schumacher sprinting into an early lead.[1] Frentzen and Villeneuve, in contrast, would make awful starts, allowing Giancarlo Fisichella to leap into second, while Ralf Schumacher slithered ahead of Villeneuve.[1]

Behind, however, there would be chaos, with numerous minor collisions eventually resulting in Pedro Diniz, on slicks, being pushed into the wall.[1] Coulthard was another early victim, spinning out at the chicane, prompting teammate Mika Häkkinen, on slicks, to slide straight into the back of Jean Alesi as both tried to avoid the stricken McLaren-Mercedes.[1] A similar incident also saw Damon Hill remove himself from the race on the back of Eddie Irvine.[1]

Out front, meanwhile, Schumacher was simply running away with the race win, pulling out a twenty second lead before the end of lap five.[1] Behind, his brother Ralf managed to dart past Frentzen to secure third behind Fisichella, with the two Jordan-Peugeots running two-three throughout the early laps.[1]

That was, until Rubens Barrichello danced his Stewart-Ford Cosworth around the pair of them, the Brazilian looking inspired on the circuit that had kick-started his legendary compatriot Ayrton Senna's career.[1] Indeed, had Schumacher not got such a good early run Barrichello may have been able to challenge, although by the time he cleared the Jordans the Brazilian was over half a minute behind.[1]

Elsewhere, Villeneuve would skate into the barriers at the chicane, while Frentzen would do likewise after stopping for wets.[1] Irvine, meanwhile, would battle his way up the order to secure third mid-race, as the Ralf Schumacher spun out, and Fisichella's pace collapsed once he opted to preserve his tyres.[1]

Michael Schumacher, meanwhile, would remain unchallenged through to the chequered flag, which appeared sixteen laps early due to the two-hour time limit.[1] Barrichello duly secured an impressive maiden podium finish for Stewart ahead of Irvine, with Olivier Panis, Mika Salo and Fisichella securing the remaining points.[1] Salo drove the race without a depot visit.

Heinz-Harald Frentzen shot into the top three after his maiden victory, leaving San Marino four behind compatriot Michael Schumacher, who had himself moved into second. However, both were still a fair way shy of early Championship leader Jacques Villeneuve, with the Canadian ace holding a six point lead over Schumacher with a quarter of the season gone. Behind, David Coulthard was level with Frentzen on ten points and a win, while Eddie Irvine, Gerhard Berger and Mika Häkkinen also having claimed ten points.

In the Constructors Championship it was Williams-Renault who once again ended a race weekend on top, moving onto 30 points with three race wins. Ferrari had moved into second, six behind the Anglo-French alliance, while McLaren-Mercedes slipped to third, ten off the lead. Benetton-Renault were next ahead of Jordan-Peugeot, while Prost-Mugen-Honda and Sauber-Petronas completing the score sheet.

The full entry list for the 1997 Monaco Grand Prix is outlined below:

The full qualifying results for the 1997 Monaco Grand Prix are outlined below:

The full results for the 1997 Monaco Grand Prix are outlined below:

Michael Schumacher moved to the top of the Championship after his first win of the season, moving four clear of former leader Jacques Villeneuve. Eddie Irvine was next, leaping up to third ahead of Heinz-Harald Frentzen, with the German racer still level with four other drivers on ten points. Behind that cluster came Olivier Panis, while Rubens Barrichello had shot into to top ten with his podium finish.

In the Constructors Championship it was Ferrari who ended the day at the head of the hunt, establishing an eight point lead. Williams-Renault had made way for them, continuing their run of race win or retirement, while McLaren-Mercedes had likewise lost ground in third, slipping eighteen off the lead. Benetton-Renault were next ahead of Prost-Mugen-Honda to complete the top five, with nine constructors on the board.