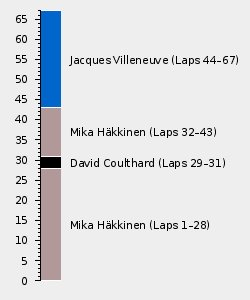 The 1997 Luxembourg Grand Prix, otherwise officially known as the V Großer Preis von Luxemburg, was the fifteenth round of the 1997 FIA Formula One World Championship, staged at the Nürburgring near Nürburg, Germany, on the 28 September 1997.[1] The race would see Jacques Villeneuve secure victory to claim the lead in the Championship, as former leader Michael Schumacher was taken out at the first corner.[1]

Qualifying had seen the Mercedes engined McLaren of Mika Häkkinen secure pole position, the first for a Mercedes engine since the 1955 Italian Grand Prix.[1] Villeneuve was a close second ahead of his Williams-Renault teammate Heinz-Harald Frentzen, while Schumacher found himself down in fifth behind Giancarlo Fisichella.[1]

The warm-up saw the two McLaren-Mercedes dominate, with Häkkinen almost a second clear of teammate David Coulthard at the head of the field.[1] Home hero Schumacher, meanwhile, was still off the pace of title rival Villeneuve, meaning it was advantage Canada ahead of the race.[1]

The start saw Häkkinen leap into an early lead, while poor starts for Villenueve and Fisichella compressed the field enough that Coulthard was able to streak into second from sixth.[1] Significantly, Schumacher would end up alongside Fisichella as they charged into turn one, with his brother Ralf Schumacher appearing alongside the sister Jordan-Peugeot.[1]

What resulted was a bizarre collision, with Ralf Schumacher squeezing teammate Fisichella, only for contact between the two to flick the #12 car into the air.[1] Ralf's car duly came slamming down on the front of brother Michael's Ferrari, destroying his suspension and his race.[1] Fisichella, meanwhile, would join them in retirement after an unsighted Ukyo Katayama ploughed into his car amid the smoke.[1]

As the two brothers collided the two Williams-Renaults also made contact, with Villeneuve miraculously escaping unharmed while Frentzen knocked his ignition switch.[1] That destroyed his momentum and dumped him back down the field, with the German finally getting back up to speed having dropped to thirteenth.[1]

Out front, meanwhile, Häkkinen would ease clear at the head of the field, dropping teammate Coulthard by almost a second a lap during the early stages.[1] Indeed, Coulthard was instead having to look in his mirrors to track Villeneuve, who had been told of Schumacher's strife and knew he would have to make the best of the German's absence.[1]

Ultimately, however, the order remained static through to the pitstops, with Häkkinen and Villeneuve, on two-stops, sweeping in on the same lap, albeit some ten seconds apart.[1] Coulthard, meanwhile, stayed out for an extra three laps, and a stellar pitstop ensured that the Scot remained ahead of Villeneuve when he rejoined.[1]

With that the race looked to be over, with Häkkinen and Coulthard now easing clear of Villeneuve, who had settled for third.[1] However, on lap 42 the race would be completely turned on its head by two engine failures, the first befalling Coulthard, before Häkkinen's blew apart a few moments later.[1]

That left Villeneuve at the head of the field with a comfortable lead, with the Canadian racer duly cruising across the line to claim victory.[1] Behind, Jean Alesi was surprised to claim second ahead of Frentzen, while Gerhard Berger secured fourth to make it a Renault engined 1-2-3-4.[1]

Incredibly, this would be Villeneuve's final F1 victory, as well as the last for Renault until the 2003 Hungarian Grand Prix.

The full entry list for the 1997 Luxembourg Grand Prix is outlined below:

The full qualifying results for the 1997 Luxembourg Grand Prix are outlined below:

The full results for the 1997 Luxembourg Grand Prix are outlined below:

Retrieved from "https://f1.fandom.com/wiki/1997_Luxembourg_Grand_Prix?oldid=84818"
Community content is available under CC-BY-SA unless otherwise noted.