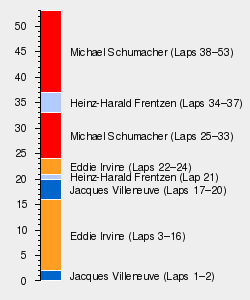 The 1997 Japanese Grand Prix, otherwise known as the XXIII Fuji Television Japanese Grand Prix (XXIII フジテレビ日本グランプリ in Japanese), was the sixteenth and penultimate round of the 1997 FIA Formula One World Championship, staged at the Suzuka Circuit on 12 October 1997.[1] The race proved to be a rather controversial one, with Championship leader Jacques Villeneuve being disqualified for a practice infringement, while Michael Schumacher swept to victory.[2]

The Canadian had started the weekend in fine form, sweeping to pole position in qualifying, only to be told that he had been excluded.[2] Replays showed that the Williams-Renault had passed several yellow flags during the session, prompting the officials to prevent the Canadian from racing at all.[2]

Williams, unsurprisingly, appealed the decision, and duly received a reprieve when the officials opted to allow Villeneuve to start from pole, albeit under a wider weekend long appeal.[2] He would hence be joined on the front row by Schumacher, while Eddie Irvine claimed third ahead of Mika Häkkinen.[2]

Raceday saw the warm-up pass without issue, with conditions remaining dry with no threat of rain.[2] With that the field gathered on the grid for the start, with questions over how Villeneuve would take the start.[2]

Unsurprisingly Villeneuve was very aggressive off the line, sweeping to the inside of the circuit to prevent Schumacher from nosing ahead into the first corner.[2] Behind, Häkkinen got the jump on Irvine, while Heinz-Harald Frentzen surged ahead of Gerhard Berger to secure fifth.[2]

Irvine was the man to watch in the early stages, passing both Häkkinen and Schumacher on lap two with a stunning move through the Esses.[2] He duly went on to harass Villeneuve for the lead for the next lap an a half, before selling the Canadian a dummy into the chicane to grab the lead.[2]

With that Irvine was away, pulling out a five second lead in a little over a lap, which exploded out to twelve in the following three.[2] Villeneuve, in truth, was forfeiting his hopes of victory by instead focusing on Schumacher, doing everything he could to keep the German ace behind him, knowing that he would win the Championship, barring appeals, as things stood.[2]

Häkkinen and Berger started the pit sequence on lap thirteen, the start of a tactical battle between McLaren-Mercedes and Benetton-Renault that involved all four of their cars.[2] Irvine and Schumacher, meanwhile, would make their stops on laps sixteen and eighteen, the latter emerging behind Johnny Herbert in the Sauber-Petronas, while Villeneuve stopped on lap twenty.[2]

Schumacher lost a little time behind Herbert, with Ferrari having sent a mechanic down to ask what their customers were doing, and was blasting down the start/finish straight as Villeneuve rejoined.[2] Having been told of Schumacher's progress Villeneuve shot straight across the circuit to try and put Schumacher off, only for the #5 Ferrari to dive inside the Williams in turn one to secure second.[2]

The second moment of controversy followed soon after, with Ferrari telling Irvine to slow down and allow Schumacher through.[2] The Brit duly did so to let Schumacher through on lap 23, before streaking across the circuit to block Villeneuve from coming through as well.[2]

With that the race was over, with Irvine doing everything in his power to ruin Villeneuve's race without making contact.[2] That, ultimately worked against him, for while Villeneuve remained behind, having seen his attempt at an undercut with an early second stop ruined by a fuel line issue, the #6 Ferrari would slip behind Frentzen.[2]

Frentzen duly went chasing off after Schumacher, but ran out of time to catch the German in-spite of the best efforts of Damon Hill to block the Ferrari when Schumacher came to lap him.[2] Behind, Irvine ran in a lonely third, while Häkkinen managed to get ahead of Villeneuve courtesy of the Canadian's poor stop.[2]

That, ultimately, was how the race finished, with Schumacher claiming victory while Villeneuve finished fifth, meaning the Canadian's lead had been cut to just a single point.[2] Frentzen, meanwhile, would finish second to secure the Constructors Championship for Williams-Renault, while Irvine completed the podium.[2]

In the weeks after the race the FIA Court of Appeal met to discuss Villeneuve's pre-race penalty, which had seen the Canadian race under appeal.[2] Their study into the incident, using a variety of replays, decided to uphold the original exclusion, meaning Villeneuve was removed from the results entirely.[2] Schumacher would hence head into the finale with a one point lead.[2]

The full entry list for the 1997 Japanese Grand Prix is outlined below:

The full qualifying results for the 1997 Japanese Grand Prix are outlined below:

The full results for the 1997 Japanese Grand Prix are outlined below:

Michael Schumacher moved back to the top of the Championship after Jacques Villeneuve's retroactive disqualification, leaving Japan with a one point lead. That meant that the German ace simply had to finish ahead of the Canadian in Jerez to claim the crown, while Villeneuve had to score a point or more regardless. Behind, Heinz-Harald Frentzen had enhanced his hold on third, leaving Japan five ahead of Jean Alesi.

In the Constructors Championship the fight for the crown was over, with Williams-Renault leaving Japan with 118 points to their name. That left the Anglo-French squad eighteen clear of Ferrari, and with only sixteen points available at each race, Williams-Renault were hence declared as Champions with a race to spare. Ferrari were hence declared in second, while Benetton-Renault were safe in third ahead of McLaren-Mercedes.