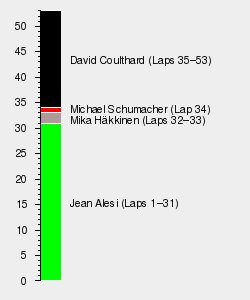 The 1997 Italian Grand Prix, otherwise known as the LXVIII Gran Premio Campari d'Italia, was the thirteenth round of the 1997 FIA Formula One World Championship, staged at the Autodromo Nazionale Monza in Monza, Italy, on the 7 September 1997.[1] The race would see David Coulthard sweep to victory for McLaren-Mercedes, as title pretenders Michael Schumacher and Jacques Villeneuve struggled throughout the weekend.[1]

Qualifying had seen the usual order of things completely dismantled, with Giancarlo Fisichella leading the way for most of the session for Jordan-Peugeot.[1] He would, however, be beaten to pole position by the ever popular Jean Alesi of Benetton-Renault, with Heinz-Harald Frentzen sneaked into second ahead of the Italian.[1] Behind, Villeneuve would claim fourth, while Schumacher found himself down in a lowly ninth for Ferrari.[1]

The warm-up passed without issue, with conditions remaining dry and warm, and with Ferrari off the overall pace.[1] There were, however, to be discussions over the race start, with several drivers asking whether it was okay to go over the white lines on the start/finish straight, which outline the side of the circuit.[1]

The officials opted to allow the use of the extra tarmac, a decision which proved crucial to the fates of Coulthard and Irvine.[1] Indeed, both blitzed their starts to leap up the order, with Coulthard settling into third behind Alesi and Frentzen, while Irvine claimed eighth behind Schumacher having been baulked by the Scot.[1]

Miraculously the field made it through the Rettifilo without issue, and would power through the rest of the opening lap without issue.[1] Out front, meanwhile, Alesi, Frentzen and Coulthard would break away from the rest, with Fisichella in fourth unable to match their pace.[1]

Yet, it quickly became clear that the race would not be a classic, quickly turning to a procession as the top three broke away.[1] Indeed, the only changes to the order came during the stops, with Villeneuve and Frentzen the first callers, a decision which ultimately ruled Frentzen out of the reckoning.[1]

Frentzen's early stop opened the door for Coulthard, who duly latched onto the back of Alesi before sweeping into the pits behind the Sicilian born Frenchman.[1] McLaren duly got the Scot back out on fresh tyres and fuel quicker than Benetton could service Alesi, allowing Coulthard to shoot away in the lead.,ref name=GP></ref>

With that the race was effectively over, for Coulthard had enough pace to keep Alesi at arm's length without straining his car.[1] Alesi hence had to look behind to keep an eye on Frentzen, although the German racer was providing no threat to the Benetton.[1]

Elsewhere, Mika Häkkinen and Schumacher would have brief stints in the lead, opting for longer first stints, which would carry the Finn into fourth and Schumacher to seventh.[1] Unfortunately for Häkkinen his race would be ruined by a delaminated tyre, promoting Schumacher into the points.[1]

That really was the last drama of the race, with Coulthard cruising home to claim victory, which he dedicated to Diana Spencer, Princess of Wales, whom had been killed in an accident on 31 August prior to the race.[1] Alesi and Frentzen completed the podium, with Fisichella, Villeneuve and Schumacher claiming the remaining points.[1]

Michael Schumacher moved eleven points clear atop the Championship after his fourth win of the campaign, leaving Belgium with 66 points. Jacques Villeneuve had therefore lost ground, and was now more than a win behind, with the Canadian ace remaining the only major pretender to Schumacher with five rounds to go. Heinz-Harald Frentzen, meanwhile, had moved into third, with just two points covering the German, Jean Alesi and fifth placed Gerhard Berger.

In the Constructors Championship it was Ferrari who had won the day, eking out their lead to six points at the head of the hunt. Williams-Renault had, however, effectively kept pace wit their Italian rivals, with Benetton-Renault having lost ground to both in third. They were, however, in a now secure third place, nineteen ahead of McLaren-Mercedes in fourth.

The full entry list for the 1997 Italian Grand Prix is outlined below:

The full qualifying results for the 1997 Italian Grand Prix are outlined below:

The full results for the 1997 Italian Grand Prix are outlined below:

With neither of the title protagonists scoring major points there had been little change atop the Championship standings, with Michael Schumacher remaining at the head of the hunt. Jacques Villeneuve had managed to reduce the German's advantage, leaving Italy ten behind, with more than double the points of Jean Alesi in third. The Frenchman himself was in an intense fight for third, with Heinz-Harald Frentzen, David Coulthard, Gerhard Berger and Eddie Irvine all within ten points of Alesi.

In the Constructors Championship Williams-Renault had done some serious damage, leaving Italy just a point off the lead. Indeed, it had been a fairly dismal day for the tifosi, with Ferrari's solitary point the only reason that they still held the lead. Behind, Benetton-Renault had maintained their hold on third, with McLaren-Mercedes only able to inch slightly closer in fourth.