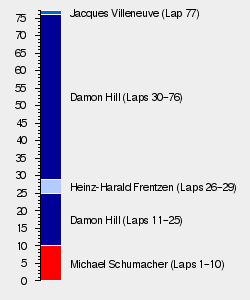 The 1997 Hungarian Grand Prix, otherwise officially known as the XIII Marlboro Magyar Nagydij, was the eleventh round of the 1997 FIA Formula One World Championship, held at the Hungaroring near Budapest, Hungary, on 10 August 1997.[1] The race would see Jacques Villeneuve secure a rather fortunate victory, overtaking a limping Damon Hill on the final lap after the Brit suffered a hydraulic failure.[1]

It was Championship leader Michael Schumacher who started the weekend the strongest, sweeping to pole position ahead of Villeneuve in qualifying.[1] Hill, meanwhile, would claim a surprisingly strong third in the otherwise off-pace Arrows-Yamaha, with Bridgestone equipped cars particularly strong on the hard wearing circuit.[1]

Sunday proved to be the warmest day of the weekend, meaning those on softer tyres, which incorporated almost all of the Goodyear runners, would struggle to maintain their tyres.[1] As such, those on Bridgestones, as well as Heinz-Harald Frentzen on harder Goodyears, had the advantage, although it would all depend on their starts.[1]

Ultimately Hill would make a strong start, sprinting ahead of Villeneuve to sit in second behind Schumacher.[1] Elsewhere, Eddie Irvine streaked through to third, with Villeneuve slotting into fifth behind Mika Häkkinen, while Jean Alesi inadvertently forced teammate Gerhard Berger onto the grass through turn two.[1]

Schumacher and Hill quickly established a gap over third placed Irvine, although the German racer was pushing his Goodyear shod Ferrari far harder than Hill.[1] Within six laps the Ferrari's rear tyres were showing signs of blistering, with Hill's Arrows remaining glued to its tail with no sign of weakness.[1]

Indeed, come lap eleven Schumacher was in serious trouble, and was hence almost powerless to prevent Hill from sweeping past to claim the lead into turn one.[1] The German racer would try, however, squeezing the Arrows-Yamaha right onto the white line on the inside of the right-hander, before ultimately relenting on the exit.[1]

With that Hill was away, prompting Schumacher to come in for his first stop a few laps later, catching Ferrari out somewhat.[1] Häkkinen duly took up the hunt of the Arrows, Irvine having stopped on lap seven for fresh rubber, although an engine failure for the McLaren-Mercedes left Villeneuve and Frentzen at the head of the pack.[1]

Villeneuve began the pit sequence on lap 24, with Hill coming in a lap later to cover the Canadian's stop.[1] Frentzen stayed out for four laps but his hopes were curtailed by a damaged fuel rig, meaning Hill was left with a handsome, and ever growing, lead over Villeneuve.[1]

Hill duly escaped at a consistent rate from the lead Williams-Renault, stopping for a second time on lap 51 without losing the lead.[1] Indeed, as soon as his advantage had grown to thirty seconds the Brit began to pace himself against those behind him, with Arrows, Yamaha and Bridgestone looking set for their maiden victory.[1]

That was, until the Brit's pace collapsed with two and a half laps to go, a hydraulic leak causing Hill's car to jam in third gear.[1] Villeneuve hence began to close at a rapid rate, and duly charged past the weaving Arrows on the final lap as they headed out past the paddock.[1]

With that the race was run, with Villeneuve streaking across the line to claim a surprise win, while Hill was a heartbroken second.[1] Johnny Herbert secured a surprising third for Sauber-Petronas, their best finish of the campaign, with Schumacher, Ralf Schumacher and Shinji Nakano claiming the remaining points.[1]

Michael Schumacher extended his Championship lead as a result of his podium finish, moving ten clear of Jacques Villeneuve in second. The Canadian racer was therefore still in prime position to attack, although his startling lack of pace in Germany suggested that all may not be well with the Canadian's title bid. Behind, Jean Alesi had retained third, Gerhard Berger had leapt into fourth with victory, while Heinz-Harald Frentzen slipped to fifth.

In the Constructors Championship Ferrari had inched away from Williams-Renault at the head of the hunt, leaving Germany nine ahead. The Anglo-French squad were still their closest challengers, while both had been slightly reeled in by Benetton-Renault, although they were still a fair way back. McLaren-Mercedes were in an increasingly distant fourth, while Prost-Mugen-Honda had just kept Jordan-Peugeot at bay to retain fifth.

The full entry list for the 1997 Hungarian Grand Prix is outlined below:

The full qualifying results for the 1997 Hungarian Grand Prix are outlined below:

Jacques Villeneuve won the race after Damon Hill's Arrows slowed on the final laps while in the lead. This was the closest Arrows had ever came to scoring a victory, after Hill had led most of the Grand Prix.

On lap 42, Giancarlo Fisichella, who was behind Michael Schumacher, tried to overtake Michael, but he spun out coming into the 1st corner. He got stuck in the gravel trap and would retire from the race.

At the final lap of the race, Eddie Irvine was pushed off by Shinji Nakano en route to a points finish. Nakano would eventually be 6th.

The full results for the 1997 Hungarian Grand Prix are outlined below:

Jacques Villeneuve used his fifth win of the season to close the gap to Michael Schumacher at the head of the Championship, leaving Hungary just three behind the German racer. Those two were now the only real contenders for the title, with Jean Alesi now 31 points behind Villeneuve, the equivalent to three race wins. The Frenchman was therefore in a fight to retain third, with six drivers covered by seven points in that particular squabble.

In the Constructors Championship it had been a positive day for Williams-Renault, who were able to carve into Ferrari's lead. Indeed, Williams ended the afternoon just two points behind the Scuderia, with those two, like their lead drivers, set to duel for the crown amongst themselves. Behind, Benetton-Renault were in an increasingly lonely third, with a fair gap back to McLaren-Mercedes in fourth.