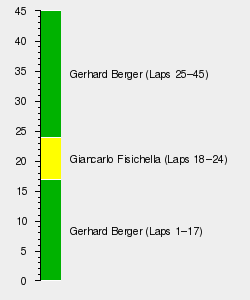 The 1997 German Grand Prix, otherwise officially advertised as the LIX Grosser Mobil 1 Preis von Deutschland, was the tenth round of the 1997 FIA Formula One World Championship, staged at the Hockenheimring in Baden-Württemberg, Germany, on the 29 July 1997.[1] The race would see Gerhard Berger claim a stirring final victory upon his return to Benetton-Renault, having missed several races due to personal circumstances.[1]

Indeed, the Austrian racer seemed to be inspired throughout the weekend, sweeping to pole position ahead of Giancarlo Fisichella in his Jordan-Peugeot.[1] Mika Häkkinen was next ahead of Championship leader Michael Schumacher, while pre-season favourite Jacques Villeneuve found himself down in ninth.[1]

Race day dawned dry, although a storm shortly after the warm-up ensured that there would be some late debate about how drivers would start the race.[1] Ultimately, however, the circuit would be largely dry before the race was scheduled to start, meaning everyone would head onto the formation lap on slicks.[1]

Berger duly aced his start to claim an early lead, aided by Fisichella making a less than perfect getaway, leaving him vulnerable to Schumacher and Häkkinen.[1] Behind, however, there would be chaos, with Heinz-Harald Frentzen making a poor start, before clashing wheels with Eddie Irvine in the first corner.[1]

That contact resulted Frentzen's car jumping sideways, sending cars scattering around him.[1] David Coulthard was the biggest victim, getting clipped by the Williams-Renault, with the Scot's McLaren-Mercedes ultimately breaking apart as he headed into the Clark Chicane a few moments later.[1]

Irvine, Frentzen and Coulthard would all limp back to the pits for repairs as, out front, Berger did his best to escape up the road.[1] His escape was very impressive, building an eight second lead in ten laps, aided by Fisichella putting up a ferocious defence from Schumacher before the Ferraris tyres began to fade.[1]

Berger made his first stop on lap seventeen, handing the lead to Fisichella, who was on a one-stop with his harder wearing Bridgestone tyres.[1] Schumacher, meanwhile, would stop on lap 22, earlier than planned having used up a lot of his tyre grip to harass Fisichella early on, with the Italian himself stopping on lap 24.[1]

All that left Berger with a sixteen second lead, with the Austrian racer only able to eek out a few tenths each lap, knowing he had to build a thirty second lead.[1] His charge would be further hindered by Jan Magnussen, who suffered a huge engine failure just as Berger came up to lap him, spraying the Benetton in oil and smoke.[1]

As such, Berger emerged from his second and final stop on lap 34 a few seconds behind the yellow Jordan, and struggled to make up the gap.[1] As such, the race had suddenly become Fisichella's to lose, and so it was particularly cruel when the Italian picked up a puncture on lap 39, which caused enough damage to the radiators to end his race completely.[1]

With that the race was over, with Berger, sweeping across the line to claim an emotional victory, his first since 1994.[1] Behind, Schumacher had a quiet afternoon to claim second ahead of Häkkinen, while Jarno Trulli secured fourth ahead of Ralf Schumacher and Jean Alesi.[1]

Jacques Villeneuve had delivered a significant blow in the Championship battle between himself and Michael Schumacher, moving on 43 points at the halfway point. Schumacher still had the lead, but his advantage had been cut to four points after he failed to score. Behind, Jean Alesi was up into third, and likely out of the Championship hunt, with Heinz-Harald Frentzen and Eddie Irvine on his tail.

Ferrari ended the weekend with the lead in the Constructors Championship, although their lead had been drastically reduced after their double retirement. Indeed, Williams-Renault had done the damage, moving to within three points of the Scuderia, with those two set to duel for the crown during the second half of the season. Behind Benetton-Renault had enhanced their grip on third, moving eleven clear of McLaren-Mercedes in fourth.

The full entry list for the 1997 German Grand Prix is outlined below:

The full qualifying results for the 1997 German Grand Prix are outlined below:

The full results for the 1997 German Grand Prix are outlined below:

Michael Schumacher extended his Championship lead as a result of his podium finish, moving ten clear of Jacques Villeneuve in second. The Canadian racer was therefore still in prime position to attack, although his startling lack of pace in Germany suggested that all may not be well with the Canadian's title bid. Behind, Jean Alesi had retained third, Gerhard Berger had leapt into fourth with victory, while Heinz-Harald Frentzen slipped to fifth.

In the Constructors Championship Ferrari had inched away from Williams-Renault at the head of the hunt, leaving Germany nine ahead. The Anglo-French squad were still their closest challengers, while both had been slightly reeled in by Benetton-Renault, although they were still a fair way back. McLaren-Mercedes were in an increasingly distant fourth, while Prost-Mugen-Honda had just kept Jordan-Peugeot at bay to retain fifth.