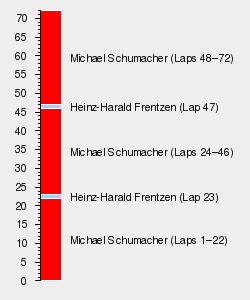 The 1997 French Grand Prix, otherwise known as the LXXXIII Grand Prix de France, was the eighth round of the 1997 FIA Formula One World Championship, staged at the Circuit de Nevers Magny-Cours in Magny-Cours, France, on the 29 June 1997.[1] The race would see Michael Schumacher sweep to a dominant victory, his third of the season, to extend his Championship lead over pre-season favourite Jacques Villeneuve.[1]

The weekend began with Schumacher sweeping to pole position, the Ferrari ace proving more than a match for the two Williams-Renaults which had dominated qualifying to that point.[1] The German racer duly claimed pole by two tenths from compatriot Heinz-Harald Frentzen, while Ralf Schumacher was a surprisingly strong third for Jordan-Peugeot.[1]

Raceday dawned with intermittent showers, although after a wet warm-up the circuit was completely dry in time for the start.[1] Schumacher duly aced his launch to claim an early lead, while Frentzen finally made a good start of his own to hold off the Jordan equipped Schumacher into the first corner.[1]

Elsewhere, the two McLaren-Mercedes catapulted themselves up the order, Mika Häkkinen and David Coulthard ending up behind Ralf Schumacher, while Jarno Trulli made a mess of his start.[1] The Italian racer would kick-up a fair cloud of tyre smoke as he tried to launch away, with the resulting compression into the first corner, caused by the slower than average Prost-Mugen-Honda, resulting in Damon Hill getting shoved off the circuit with a broken nose.[1]

Yet, the order would quickly settle, with Michael Schumacher quickly building a lead over Frentzen.[1] Behind Ralf Schumacher would keep the two McLarens at bay, aided by the early demise of Häkkinen, with the top eight remaining unchanged barring the Finn's early exit.[1]

Indeed, the order hardly changed during either of the two scheduled stops, with Frentzen denying Schumacher a potential Grand Chelem by leading for a couple of laps.[1] After the completion of their stops the Williams was still ten seconds down on the Ferrari, although the skies around Magny-Cours had got noticeably darker.[1]

The clouds duly broke with nine laps to go, a quick but constant drizzle ensuring that the circuit quickly became greasy, but not significantly wet.[1] Several drivers would sweep into the pits for intermediates, the highest placed being Coulthard in fifth, although the top four, comprising of Schumacher, Frentzen, Eddie Irvine and Villeneuve, all stayed out.[1]

Irvine and Villeneuve would come in for inters later, with a slow stop for Villeneuve resulting in him slipping behind Coulthard and Ralf Schumacher.[1] Out front, meanwhile, Michael Schumacher and Frentzen would slither on with slicks, both having missed the chance to stop without slipping down the order.[1]

On the penultimate lap there would be some drastic changes in the fight for fourth, with Villeneuve sweeping past Ralf Schumacher, while Coulthard made a mistake and slipped behind the pair of them.[1] The Scot duly rejoined ahead of Jean Alesi, although they were both to be promoted when Schumacher spun and dropped behind them to seventh.[1]

Onto the final lap and Michael Schumacher lapped his brother Ralf towards the end of the lap, although ultimately eased off at the end of the lap to allow the Jordan to streak back onto the lead lap.[1] That proved to be vital for Ralf's race, for an aggressive move by Alesi on the final lap saw the Frenchman put Coulthard into the gravel when defending fifth, leaving the Scot stranded.[1]

Out front, meanwhile, Michael Schumacher would cruise across the line over twenty seconds clear of Frentzen, while Villeneuve spun into the pit lane at the last corner while trying to pass Irvine which allowed Irvine to complete the podium.[1] Villeneuve would re-join just in front of Alesi who would finish a controversial fifth ahead of Ralf Schumacher, with Coulthard ultimately ending the day in seventh and hugely frustrated.[1]

Michael Schumacher moved back to the top of the Championship with his second win of the season, establishing a seven point lead. Jacques Villeneuve had made way for him, a disappointing end to his home race, with an now injured Olivier Panis in third. Behind him sat Eddie Irvine ahead of Heinz-Harald Frentzen, with Jean Alesi level with the German in sixth.

In the Constructors Championship Ferrari had managed to build up their lead, leaving Canada with an eight point advantage. Williams-Renault were still their closest challengers, sat on 43 points, with a twenty point gap back to the similarly engined Benetton-Renault effort. Benetton themselves had moved into third as a result of the Canadian weekend, moving ahead of McLaren-Mercedes, with Prost-Mugen-Honda completing the top five.

The full entry list for the 1997 French Grand Prix is outlined below:

The full qualifying results for the 1997 French Grand Prix are outlined below:

The full results for the 1997 French Grand Prix are outlined below:

Michael Schumacher moved fourteen points clear atop the Championship after his third win of the campaign, leaving France with 47 points to his name. Jacques Villeneuve remained his closest challenger, ending the day on 33 points, with both drivers having scored three wins. Heinz-Harald Frentzen, meanwhile, had climbed to third ahead of Eddie Irvine, while Olivier Panis slipped to fifth.

In the Constructors Championship it was a positive day for Ferrari, who moved thirteen points clear at the head of the hunt. Williams-Renault were their biggest threat, widely believed to have a superior car but poorer luck, with those two the favourites for the title heading into the second half of the season. Behind, Benetton-Renault had lost ground in third ahead of McLaren-Mercedes, with Prost-Mugen-Honda hanging onto their top-five status.