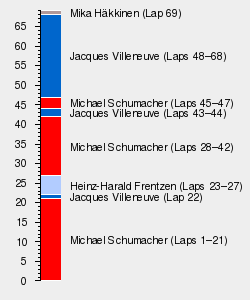 The 1997 European Grand Prix, otherwise known as the XLII Grand Prix of Europe, was the seventeenth and final round of the 1997 FIA Formula One World Championship, held at the Circuito de Jerez in Jerez, Spain, on the 26 October 1997.[1] The race would see Jacques Villeneuve claim his only World Championship crown, after Championship leader Michael Schumacher tried and failed to take the Canadian racer out.[1]

The weekend began with Villeneuve claiming pole position early on during qualifying, avoiding Ferrari's tactical rolling road-block named Eddie Irvine.[1] Schumacher would, however, start alongside the Canadian and ahead of Heinz-Harald Frentzen, as all three set identical times of 1:21.072.[1] FIA rules on the order of when the laps were set therefore dictated the grid, with Villeneuve the earliest to set his time, while Frentzen was the latest.[1]

The start of the race saw Schumacher make a stronger start, surging ahead of Villeneuve to secure the lead into turn one.[1] Frentzen also got the jump on Villeneuve and so eased ahead of the Canadian into the first corner, with the top three stalked by the two McLaren-Mercedes.[1]

Once it became clear that Frentzen would be no threat to Schumacher the Williams-Renault team ordered the German to swap with Villeneuve, which he duly did on lap eight.[1] The order would then remain fairly static throughout the field through to the first stops, with Schumacher having established a small lead.[1]

During the first round of tyre and fuel swaps David Coulthard would jump ahead of teammate Mika Häkkinen, while both emerged ahead of Frentzen.[1] Villeneuve, meanwhile, would get slightly closer to Schumacher, before all but eliminating the gap between them ahead of the second stops.[1]

The second round of stops produced a similar result, with Villeneuve making more ground on Schumacher, while the two McLarens made ground on the pair of them.[1] Indeed, come lap 48 Villeneuve was in position to attack Schumacher for the lead, knowing that he had to finish ahead of the German in order to take the crown.[1]

Villeneuve's bid for the lead was made on the brakes for Dry Sack, with the Canadian ace sending his Williams lunging inside the Ferrari at the hairpin.[1] Schumacher saw the move late and acted rashly to "defend" his lead, turning right into the side of the Williams and hitting the Canadian's sidepod.[1]

The collision demolished Schumacher's right front suspension, sending him sliding into the gravel and out of the race.[1] Villeneuve, meanwhile, carried on with only a tyre mark on the side of his Williams, although internally the Williams was carrying damage to the battery mounts, which had reduced the stiffness of the chassis.[1]

Villeneuve's pace deteriorated as the race wore on, although the Canadian racer only needed to finish in the points to beat Schumacher in the Championship.[1] The two McLarens duly swept past the #3 Williams in the closing stages, while Gerhard Berger would close ominiously on the Canadian in the final laps.[1]

Ultimately, however, Berger would run out of time to catch the Canadian, falling shy at the chequered flag by 0.116s.[1] Ahead, meanwhile, Häkkinen claimed a popular maiden victory ahead of teammate Coulthard, while third for Villeneuve ensured that he won the title.[1]

After the race, however, there would be a lot of discussions, with the FIA forced into launching several investigations after the race.[1] The first, announced on 11 November 1997, resulted in Schumacher being thrown out of the Championship for deliberately crashing into another driver, although the German ace would retain his race wins.[1] The second saw Williams and McLaren appear before a tribunal to discuss whether they had collaborated during the race, although this was ultimately thrown out by the FIA.[1]

Regardless, Villeneuve was declared as the 1997 World Champion ahead of teammate Frentzen, while Williams-Renault were the Constructors Champions, in the last year of their partnership.[1]

Michael Schumacher moved back to the top of the Championship after Jacques Villeneuve's retroactive disqualification, leaving Japan with a one point lead. That meant that the German ace simply had to finish ahead of the Canadian in Jerez to claim the crown, while Villeneuve had to score a point or more regardless. Behind, Heinz-Harald Frentzen had enhanced his hold on third, leaving Japan five ahead of Jean Alesi.

In the Constructors Championship the fight for the crown was over, with Williams-Renault leaving Japan with 118 points to their name. That left the Anglo-French squad eighteen clear of Ferrari, and with only sixteen points available at each race, Williams-Renault were hence declared as Champions with a race to spare. Ferrari were hence declared in second, while Benetton-Renault were safe in third ahead of McLaren-Mercedes.

The full entry list for the 1997 European Grand Prix is outlined below:

The full qualifying results for the 1997 European Grand Prix are outlined below:

The full results for the 1997 European Grand Prix are outlined below:

With that the 1997 FIA Formula One World Championship was over, with the final Championship standings published on the 11 November 1997, two weeks after the final round. Jacques Villeneuve was declared as the Champion on 81 points, while Heinz-Harald Frentzen secured second on 42 points. David Coulthard would complete the top three ahead of Jean Alesi and Gerhard Berger, while Michael Schumacher was thrown out of the Championship altogether having originally finished second.

In the Constructors Championship Williams-Renault rounded out their partnership with 123 points and eight wins. Ferrari secured second, having been allowed to keep the 78 points scored by Schumacher across the campaign, and hence concluded the season on 102 points. Benetton-Renault, meanwhile, were classified in third, four ahead of McLaren-Mercedes, while Jordan-Peugeot completed the final top five.