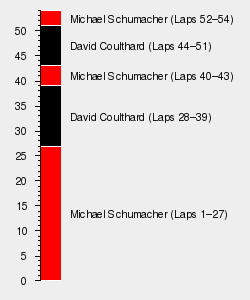 The XXXV Grand Prix Player's du Canada, otherwise known as the 1997 Canadian Grand Prix, was the seventh round of the 1997 FIA Formula One World Championship, staged at the Circuit Gilles Villeneuve in Montreal, Canada, on the 15 June 1997.[1] The race would see Michael Schumacher secure a rather fortunate victory for Ferrari, after the race was stopped prematurely due to a huge accident for Olivier Panis.[1]

In fairness the German ace had earned some luck, edging out Jacques Villeneuve to secure pole position in qualifying by just 0.013s.[1] Rubens Barrichello was a surprise third for Stewart-Ford Cosworth, while Heinz-Harald Frentzen could only muster fourth in the second Williams-Renault.[1]

Schumacher duly aced his start to secure an early lead, with Villeneuve sweeping into his wake having been unable to challenge into the first corner.[1] Behind, Giancarlo Fisichella made a barnstorming start to secure third, dragging Jean Alesi with him.[1]

Elsewhere, Barrichello would make an awful start, causing Mika Häkkinen to brake heavily, and hence get whacked by Olivier Panis.[1] Those two would limp back to the pits to have their missing wings replaced, while Barrichello escaped in eighth behind Ralf Schumacher.[1]

Michael Schumacher would bolt during the early stages, with Villeneuve opting to nurse his tyres, knowing that it was likely his only hope of beating the tyre friendly Williams.[1] However, his sprint was ultimately made to be pointless before the end of the second lap, for Villeneuve contrived to slide into the barriers at the final chicane.[1]

That left Schumacher with a fair lead over Fisichella, Alesi and David Coulthard, although that would be wiped out by the Safety Car on lap six.[1] The cause of the SC would be Ukyo Katayama, who demolished his Minardi-Hart when the throttle jammed and sent him flying into the barriers.[1]

The restart saw Schumacher once again bolt, although Fisichella and Alesi would do their best to go with him, having adopted a similar two-stop strategy.[1] Indeed, that left Schumacher's biggest threat in the form of Coulthard, who was the first driver in the field on a one-stop.[1]

By the time Schumacher made his first stop on lap 28 he had only built a ten second lead, with Coulthard duly sweeping through to secure first place, Fisichella and Alesi having made their stops earlier.[1] Schumacher, then in second, would subsequently struggle to close on the McLaren-Mercedes, which was getting as a strong as the Ferrari as the Scot burned through his fuel.[1]

Coulthard made his lone stop on lap 40, handing the lead briefly to Schumacher before the German came in for his stop a few laps later.[1] When the #5 Ferrari rejoined Schumacher found himself fifteen seconds behind, with Coulthard cruising.[1]

Indeed, such was Coulthard's advantage, with the Scot again easing away from the Ferrari, that the McLaren squad decided to make a precautionary stop on lap 51.[1] That proved to be a huge mistake, for a clutch issue caused Coulthard to stall, dumping him from the lead down to seventh.[1]

Three laps later and the race was over, for Panis' Prost-Mugen-Honda would throw itself into the wall at turn five after a suspension failure.[1] The safety car came out for a lap, before the race was stopped completely due to the severity of Panis' injuries and need to be extracted.[1]

The result was declared as the field had completed lap 54, with Schumacher declared as the victor ahead of Alesi.[1] Fisichella would ultimately claimed third ahead of Frentzen, while Johnny Herbert and Shinji Nakano secured the remaining points ahead of a frustrated Coulthard.[1]

Panis was flown to hospital with two fractured legs, but was not in a life threatening condition.[1]

A third win of the campaign carried Jacques Villeneuve back to the top of the Championship standings, the Canadian ace leaving Spain with a three point lead. Michael Schumacher had made way for Villeneuve and slipped to second, while Olivier Panis rocketed up to third, although he only had half the number of points of Villeneuve. Eddie Irvine and David Coulthard completed the top five, with fifteen drivers on the score sheet.

In the Constructors Championship Ferrari had just held onto their lead, although it had been cut to just a single point. Williams-Renault were the team to do the damage, ending the weekend on 40 points, with almost double the number of points of McLaren-Mercedes in third. Behind McLaren were Benetton-Renault and Prost-Mugen-Honda, the only other teams in double figures after the opening third of the season.

The full entry list for the 1997 Canadian Grand Prix is outlined below:

The full qualifying results for the 1997 Canadian Grand Prix are outlined below:

The full results for the 1997 Canadian Grand Prix are outlined below:

Michael Schumacher moved back to the top of the Championship with his second win of the season, establishing a seven point lead. Jacques Villeneuve had made way for him, a disappointing end to his home race, with an now injured Olivier Panis in third. Behind him sat Eddie Irvine ahead of Heinz-Harald Frentzen, with Jean Alesi level with the German in sixth.

In the Constructors Championship Ferrari had managed to build up their lead, leaving Canada with an eight point advantage. Williams-Renault were still their closest challengers, sat on 43 points, with a twenty point gap back to the similarly engined Benetton-Renault effort. Benetton themselves had moved into third as a result of the Canadian weekend, moving ahead of McLaren-Mercedes, with Prost-Mugen-Honda completing the top five.