Formula 1 Wiki
Register
Don't have an account?
Sign In
Advertisement
in: 1997 Grands Prix, British Grand Prix, Formula One races in the United Kingdom 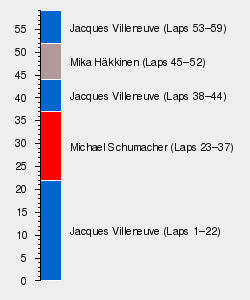 The 1997 British Grand Prix, otherwise known as the L RAC British Grand Prix, was the ninth round of the 1997 FIA Formula One World Championship, staged at the Silverstone Circuit in Northamptonshire, UK, on the 13 July 1997.[1] The race, which was the 50th British Grand Prix to be held to F1 rules, would see Jacques Villeneuve claim the 100th race victory for Williams as a constructor.[1]

Villeneuve would secure a comfortable pole position during qualifying, a return to his early season form.[1] His teammate Heinz-Harald Frentzen was second ahead of a surprisingly strong Mika Häkkinen, while Championship leader Michael Schumacher completed the second row.[1]

The start of the race would, however, have to be aborted, for Frentzen stalled just as the lights came on.[1] He was duly sent to the back of the grid for the second start, and hence gifted Villeneuve the chance to claim an early lead unopposed.[1]

Villeneuve duly made a strong start to claim the lead, while Schumacher, with clear track in front of him secured second.[1] The German racer was, however, to be challenged by a fast starting David Coulthard, who shot from sixth to third in the short sprint to Copse.[1]

Further down a series of incidents further down would thin the field, with Ukyo Katayama managing to spin into the pitwall at the start, all on his own.[1] Frentzen, meanwhile, would be wiped out by Jos Verstappen as he tried to battle up from the back of the field, with the Safety Car required to clear the circuit.[1]

The race resumed on lap five, with Schumacher entertaining an early challenge on Villeneuve, only for the Canadian ace to establish himself in front.[1] The #3 Williams duly began to inch away, while both dropped Coulthard at a significant rate.[1]

Indeed, the Scot's lack of pace would be a major benefit, for Coulthard was keeping a large queue of traffic behind.[1] That became all the more crucial to Villeneuve's race when his pace suddenly collapsed, caused by a wheel nut coming lose on lap ten.[1]

Ironically, the lose wheel nut would play havoc on Villeneuve's stop when he came in for his first stop, sticking on to delay the Canadian long enough for Schumacher to sweep into the lead.[1] Villeneuve ultimately lost thirty seconds in the pits, although Coulthard's lack of pace meant that he rejoined in seventh, right at the back of the Scot's queue as it began to fracture.[1]

The Canadian ace quickly carved his way through the train, although Schumacher would hold a 40 second lead by the time Villeneuve found clear air.[1] Yet, a seeming nailed-on victory would escape the German soon after, with a wheel bearing failure resulting in Schumacher weaving his way into the pits to retire.[1]

Villeneuve was left with a fair lead, although a second stop put him back behind Mika Häkkinen, who was on a one-stop race.[1] Furthermore, while the Canadian racer was able to catch the Finn he seemed to lack the extra pace needed to overtake the McLaren-Mercedes, until Häkkinen's engine expired with six laps to go.[1]

Villeneuve duly cruised across the line to claim victory a few minutes later, with Jean Alesi ten seconds behind in second.[1] Alexander Wurz was an impressive third, claiming his maiden podium finish, with Coulthard, Ralf Schumacher and Damon Hill securing the remaining points.[1]

Michael Schumacher moved fourteen points clear atop the Championship after his third win of the campaign, leaving France with 47 points to his name. Jacques Villeneuve remained his closest challenger, ending the day on 33 points, with both drivers having scored three wins. Heinz-Harald Frentzen, meanwhile, had climbed to third ahead of Eddie Irvine, while Olivier Panis slipped to fifth.

In the Constructors Championship it was a positive day for Ferrari, who moved thirteen points clear at the head of the hunt. Williams-Renault were their biggest threat, widely believed to have a superior car but poorer luck, with those two the favourites for the title heading into the second half of the season. Behind, Benetton-Renault had lost ground in third ahead of McLaren-Mercedes, with Prost-Mugen-Honda hanging onto their top-five status.

The full entry list for the 1997 British Grand Prix is outlined below:

The full qualifying results for the 1997 British Grand Prix are outlined below:

The full results for the 1997 British Grand Prix are outlined below:

Jacques Villeneuve had delivered a significant blow in the Championship battle between himself and Michael Schumacher, moving on 43 points at the halfway point. Schumacher still had the lead, but his advantage had been cut to four points after he failed to score. Behind, Jean Alesi was up into third, and likely out of the Championship hunt, with Heinz-Harald Frentzen and Eddie Irvine on his tail.

Ferrari ended the weekend with the lead in the Constructors Championship, although their lead had been drastically reduced after their double retirement. Indeed, Williams-Renault had done the damage, moving to within three points of the Scuderia, with those two set to duel for the crown during the second half of the season. Behind Benetton-Renault had enhanced their grip on third, moving eleven clear of McLaren-Mercedes in fourth.