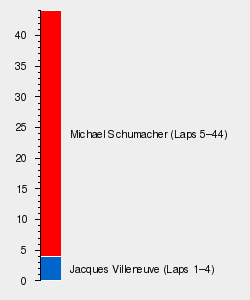 The 1997 Belgian Grand Prix, otherwise known as the LV Grand Prix de Belgique, was the twelfth round of the 1997 FIA Formula One World Championship, staged at the Circuit de Spa-Francorchamps in Spa, Belgium, on the 24 August 1997.[1] The race would see Michael Schumacher claim a stunning victory in incredibly wet conditions, with the Grand Prix started behind the Safety Car for the first time in F1 history.[1]

Qualifying had seen Schumacher completely outclassed by title rival Jacques Villeneuve, who swept to pole position by three tenths of a second.[1] Jean Alesi grabbed second for Benetton-Renault, while Schumacher managed to secure third ahead of Giancarlo Fisichella of Jordan-Peugeot.[1]

Raceday dawned hot and dry, with Schumacher showing no signs of pace, ending the warm-up down in fifteenth.[1] However, as the field assembled on the grid for the start a cloud burst swept across the Ardens, resulting in monsoon-like conditions and the start to be delayed.[1]

The rain eventually passed and the race officially started behind the safety car, by which time the Spa circuit was bathed in 28°C heat.[1] Villeneuve and Alesi had led the field away on full wets, while Schumacher, ever the gambler, opted for intermediates.[1]

An eventful three laps behind the safety car saw Mika Häkkinen run off circuit and lose two places, only to overtake both his passers and reclaim fifth.[1] The Finn later received a reprimand and suspended one-race ban for overtaking behind the safety car, with everyone unclear on the rules.[1]

Regardless, the race finally got underway at the start of lap four, with Villeneuve initially able to break clear with Alesi.[1] However, it quickly became clear that the circuit was significantly less damp than it had been when the field first left the grid, allowing Schumacher to come to the fore.[1]

A dive past Alesi into La Source and then a slither around the outside of Villeneuve at Rivage and the #5 Ferrari was away, with Schumacher instantly building a huge lead.[1] Indeed, come the end of lap nine the German racer was a full minute ahead, and duly pitted for slick tyres on lap 14 without losing the lead.[1]

Villeneuve, meanwhile, would destroy his slim hopes by locking up so badly at the Busstop that he slid into the pitlane on lap six, prompting Williams-Renault to put him on intermediates.[1] However, the Canadian's pace proved no better and so they quickly brought him back in, deliberately, for slicks, although by that stage Villeneuve had slumped to sixteenth.[1]

Villeneuve's demise allowed Fisichella to secure second, with the Italian copying Schumacher's sprint clear.[1] Those two would run unopposed for the rest of the afternoon, while Häkkinen emerged from the early chaos in third.[1]

With that the race was effectively over, turning into a procession as the circuit dried.[1] Schumacher duly won at a canter ahead of Fisichella and Häkkinen, while Villeneuve battled his way back up to sixth behind Heinz-Harald Frentzen and Johnny Herbert.[1]

After the race, however, there would be an investigation into the two McLaren-Mercedes, which were accused of using illegal fuel during practice/qualifying.[1] The fuel samples submitted were duly declared illegal and Häkkinen disqualified, promoting Frentzen into third and Villeneuve into fifth.[1]

Jacques Villeneuve used his fifth win of the season to close the gap to Michael Schumacher at the head of the Championship, leaving Hungary just three behind the German racer. Those two were now the only real contenders for the title, with Jean Alesi now 31 points behind Villeneuve, the equivalent to three race wins. The Frenchman was therefore in a fight to retain third, with six drivers covered by seven points in that particular squabble.

In the Constructors Championship it had been a positive day for Williams-Renault, who were able to carve into Ferrari's lead. Indeed, Williams ended the afternoon just two points behind the Scuderia, with those two, like their lead drivers, set to duel for the crown amongst themselves. Behind, Benetton-Renault were in an increasingly lonely third, with a fair gap back to McLaren-Mercedes in fourth.

The full entry list for the 1997 Belgian Grand Prix is outlined below:

The full qualifying results for the 1997 Belgian Grand Prix are outlined below:

The full results for the 1997 Belgian Grand Prix are outlined below:

Michael Schumacher moved eleven points clear atop the Championship after his fourth win of the campaign, leaving Belgium with 66 points. Jacques Villeneuve had therefore lost ground, and was now more than a win behind, with the Canadian ace remaining the only major pretender to Schumacher with five rounds to go. Heinz-Harald Frentzen, meanwhile, had moved into third, with just two points covering the German, Jean Alesi and fifth placed Gerhard Berger.

In the Constructors Championship it was Ferrari who had won the day, eking out their lead to six points at the head of the hunt. Williams-Renault had, however, effectively kept pace wit their Italian rivals, with Benetton-Renault having lost ground to both in third. They were, however, in a now secure third place, nineteen ahead of McLaren-Mercedes in fourth.