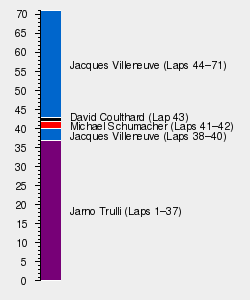 The XXI Großer Preis von Österreich, otherwise known as the 1997 Austrian Grand Prix, was the fourteenth round of the 1997 FIA Formula One World Championship, staged at the A1 Ring in Spielberg, Austria, on the 21 September 1997.[1] The race, which was the first to be held in Austria since 1987, would see Jacques Villeneuve secure a strong victory to re-ignite his title hopes.[1]

The return of the Austrian Grand Prix brought with it the return of the ever popular Österreichring to the F1 calendar, although the circuit had been heavily revised.[1] Indeed, the new layout cut out the old Hella-Licht chicane completely, while the pit-complex had been completely rebuilt amid a major branding deal with A1 Telekom Austria.[1]

Qualifying had seen Villeneuve secure pole position late on, snatching top spot on the grid from Mika Häkkinen in the dying moments.[1] It was Jarno Trulli, however, who caused the biggest stir, grabbing third in the spare Prost-Mugen-Honda, despite the fact that the car had been setup for teammate Shinji Nakano, who was down in sixteenth.[1]

There would be heartbreak for the home fans even before the start of the race, for soon-to-be-retired Austrian ace Gerhard Berger was forced to enter the pits after an issue on the formation lap.[1] He duly took off from the pits after the field had launched away from the grid, only to spin as he rejoined on cold tyres.[1]

On track, meanwhile, it was Häkkinen who streaked into the lead off the grid, while Trulli also managed to scramble ahead of Villeneuve to secure second.[1] However, Häkkinen's lead was not to last, with his Mercedes engine destroying itself before the end of the opening tour.[1]

Trulli therefore led a race for the first time in his F1 career, and was able build his advantage with a series of fastest laps.[1] Behind, Villeneuve had managed to slip behind Rubens Barrichello in the Stewart-Ford Cosworth, and was forced to spend the opening laps fending off Jan Magnussen in the second Stewart.[1]

By lap 24 Villeneuve would finally manage to get clear of Barrichello, although he now found himself over ten seconds behind Trulli.[1] With that, however, the Canadian racer began to push on, with a series of fastest laps, combined with a worsening engine issue for Trulli, carrying him back onto the Italian's tail.[1]

Ultimately, however, their battle would be decided in the pitlane, with a stunning in-lap for Villeneuve doing the damage.[1] Indeed, the Canadian ace emerged from the pitlane just ahead of a long running Giancarlo Fisichella, who was doing his best to keep his compatriot Trulli at bay.[1]

With that the race for the win was over, for Villeneuve was able to ease clear of Trulli, before the Italian's race was ended by an engine failure.[1] By that stage the Prost had slipped into the sights of David Coulthard, who had vaulted past the Stewarts during the stops, with the Mugen-Honda duly spraying the Scot with oil when it expired.[1]

Villeneuve duly cruised home to claim a comfortable victory, even surviving a brief scare when Berger dramatically slowed in front of him.[1] Coulthard settled for second ahead of Frentzen, who benefited from a poor decision from Michael Schumacher, who passed the German under yellow flags.[1] The officials duly slapped the #5 Ferrari with a ten second stop-go, dumping the German back to sixth behind Fisichella and Ralf Schumacher.[1]

With neither of the title protagonists scoring major points there had been little change atop the Championship standings, with Michael Schumacher remaining at the head of the hunt. Jacques Villeneuve had managed to reduce the German's advantage, leaving Italy ten behind, with more than double the points of Jean Alesi in third. The Frenchman himself was in an intense fight for third, with Heinz-Harald Frentzen, David Coulthard, Gerhard Berger and Eddie Irvine all within ten points of Alesi.

In the Constructors Championship Williams-Renault had done some serious damage, leaving Italy just a point off the lead. Indeed, it had been a fairly dismal day for the tifosi, with Ferrari's solitary point the only reason that they still held the lead. Behind, Benetton-Renault had maintained their hold on third, with McLaren-Mercedes only able to inch slightly closer in fourth.

The full entry list for the 1997 Austrian Grand Prix is outlined below:

The full qualifying results for the 1997 Austrian Grand Prix are outlined below:

The full results for the 1997 Austrian Grand Prix are outlined below: