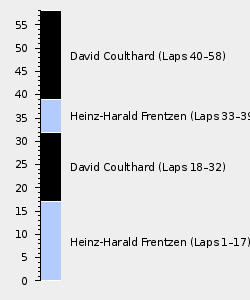 The 1997 Australian Grand Prix, otherwise officially known as the LXII Qantas Australian Grand Prix, was the opening round of the 1997 FIA Formula One World Championship, staged at the Albert Park Circuit in Melbourne, Australia, on the 9 March 1997.[1] The race would see David Coulthard claim an unlikely victory for McLaren-Mercedes, the first for a Mercedes engine since the 1955 Italian Grand Prix.[1]

It had been a busy winter after the conclusion of the 1996 season, with World Champion Damon Hill moving to Arrows-Yamaha having lost his seat at Williams-Renault.[1] His place at Williams was subsequently taken by Heinz-Harald Frentzen, although it was the German's new teammate Jacques Villeneuve who would start the season as favourite.[1]

Elsewhere, two new teams led by two former World Champions entered the fray, with Jackie Stewart and Alain Prost setting up the eponymous teams Stewart and Prost.[1] Both had factory engine deals, Stewart with Ford Cosworth and Prost with Mugen-Honda, and had employed a promising talent to partner a rookie.[1]

A third new team appeared in the form of Lola, although a non-existent development programme saw the bizarrely liveried cars as the major unknowns ahead of the season.[1] There was another unknown in the form of Bridgestone, who were entering F1 for the first time as a full-time tyre supplier, having previously made a couple of appearances in the Japanese Grand Prix in the 1970s.[1]

Into the opening round itself and Villeneuve confirmed his pre-season status as favourite, claiming a dominant pole position by over 1.7 seconds from new teammate Frentzen.[1] Michael Schumacher was best of the rest in third, two seconds shy of the Canadian, with Coulthard lining up in third.[1]

However, Villeneuve's hopes were ruined right at the start of the race, for Eddie Irvine, starting in fifth, would somehow manage to slam into the Williams at the first corner.[1] That ultimately gifted the lead to Frentzen, while Coulthard managed to ease ahead of Schumacher to secure second.[1]

Frentzen, on a two-stop strategy that was intended to keep his car on low fuel, escaped up the road during the early stages, while Coulthard established a small gap over Schumacher.[1] Indeed, the race became rather tepid after the initial chaos of the start, with no significant changes until Frentzen made his first stop.[1]

The German racer would drop to third after his stop on lap eighteen, although he was immediately able to close in on the two ahead.[1] The German racer duly re-took the lead when Coulthard and Schumacher made their only stops mid-race, establishing a 23 second lead over the Scot.[1]

A trip through the pitlane would theoretically cost a driver 22-24 seconds, meaning Frentzen was right on the verge of slipping behind the #10 McLaren.[1] Unfortunately for him a slow stop saw him lose an extra six seconds, dumping him back behind both Coulthard and Schumacher.[1]

With that Frentzen's hopes of a maiden win were over, for while he was able draft easily onto the back of Schumacher, he had no means of overtaking the Ferrari.[1] Furthermore, a sustained period behind the #5 car ultimately resulted in Frentzen's already strained brakes, which duly failed completely within sight of the chequered flag.[1]

Out front, meanwhile, Coulthard was left to claim a startling win for McLaren-Mercedes, the first for the former Champions since the 1993 Australian Grand Prix.[1] Schumacher duly finished second, despite having to make a late splash-and-dash for fuel, while Mika Häkkinen inherited third when Frentzen's brakes had failed.[1]

The full entry list for the 1997 Australian Grand Prix is outlined below:

The full qualifying results for the 1997 Australian Grand Prix are outlined below:

* Hill was unable to start the race.

The full results for the 1997 Australian Grand Prix are outlined below:

David Coulthard would start the season as the Championship leader after his second career victory, leaving Australia with a four point lead. Michael Schumacher was in second ahead of Mika Häkkinen, while Gerhard Berger and Olivier Panis completed the first top five of the season. Nicola Larini was the only other scorer.

In the Constructors Championship it was McLaren-Mercedes who left the opening round as the leaders, leaving Melbourne with fourteen points to their name. Ferrari were eight points behind in second, with Benetton-Renault ended the day in third, three behind Ferrari. Prost-Mugen-Honda and Sauber-Petronas were also on the board, while defending Champions Williams-Renault had failed to score.

Retrieved from "https://f1.fandom.com/wiki/1997_Australian_Grand_Prix?oldid=88402"
Community content is available under CC-BY-SA unless otherwise noted.