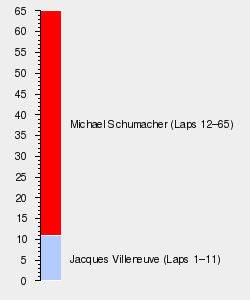 The 1996 Spanish Grand Prix, otherwise officially known as the XXXVIII Gran Premio Marlboro de España, was the seventh round of the 1996 FIA Formula One World Championship, staged at the Circuit de Catalunya near Barcelona, Spain, on the 2 June 1996.[1] The race would see Michael Schumacher put together a performance that would go down in F1 folklore, securing the first of 72 victories for Ferrari in heavy rain.[1]

The German ace's chances of victory had looked very slim after qualifying, for Damon Hill had swept to pole position by almost half a second over his Williams-Renault teammate Jacques Villeneuve.[1] Schumacher, meanwhile, was almost a second off the pace in third, ahead of the two Benetton-Renaults of Jean Alesi and Gerhard Berger.[1]

Rain on Sunday morning confused things, with the order with full wet setups remaining unclear as a huge accident for Heinz-Harald Frentzen resulted in the warm-up being ended prematurely.[1] The conditions also brought talk of a Safety Car start, which the drivers were informed of during the pre-race drivers' briefing, although when it came to start the race the safety car was sent to the back of the grid as usual.[1]

Hill and Schumacher duly made poor starts, allowing Villeneuve to slither into the lead ahead of Alesi.[1] Hill eventually secured third ahead of Berger, while Schumacher tumbled to seventh behind Rubens Barrichello and his teammate Eddie Irvine.[1]

Behind a multi-car accident thinned the field, with David Coulthard smacking into Irvine, before spinning across the circuit.[1] The sliding McLaren-Mercedes then caused further clashes between the two Minardi-Ford Cosworth, Ricardo Rosset in his Footwork-Hart, Ukyo Katayama's Tyrrell-Yamaha, and the Ligier-Mugen-Honda of Olivier Panis.[1]

Irvine dropped out on the second lap, beaching himself on a grass verge, leaving Schumacher clear to attack and pass Barrichello.[1] The #1 Ferrari duly swept onto the back of Berger a few moments later to begin an attack for fourth, which soon became a battle for third as Hill spun down the order.[1]

Indeed, it was the beginning of a miserable afternoon for the Championship leader, with a second spin a few laps later dropping him down behind Jos Verstappen.[1] A third and final spin resulted in the Williams-Renault smashing into the pitwall, with Hill climbing out and hopping over the barrier to make a very short walk back to the Williams pitbox.[1]

Hill's misfortunes would fuel the Schumacher fans, who cheered loudly every time they saw the #5 Williams in strife.[1] Schumacher himself would also get them on their feet, with a seven lap burst seeing the German pass Berger, Alesi and Villeneuve in short order.[1]

Once Schumacher was clear of Villeneuve the race was over, with a series of fastest laps seeing the German ace establish a huge lead.[1] He duly pitted without losing the lead mid-race, with Alesi getting the jump on Villeneuve during the same wet tyre swap.[1]

That, ultimately, was how it stayed for the rest of the race, with Schumacher cruising across the line three quarters of a minute clear of Alesi to secure victory.[1] Villeneuve completed the podium ahead of Frentzen in the spare Sauber-Ford Cosworth, with Mika Häkkinen and Pedro Diniz completing the top six as the only other finishers.[1]

There were no changes atop the Championship as a result of the Monaco Grand Prix, with none of the title protagonists managing to score. Damon Hill hence retained his 21 point lead over Jacques Villeneuve, while Michael Schumacher remained six behind the Canadian in third. Instead, the big winner, literally, was Olivier Panis, who shot into fourth after his maiden victory.

It was a similar story in the Constructors Championship, with none of the lead trio managing to get a car to the finish. As a result, Williams-Renault held their 40 point lead over Ferrari, with Benetton-Renault seven off the Scuderia in third. McLaren-Mercedes had, however, inched closer to Benetton in fourth, while Ligier-Mugen-Honda were up to fifth after their shock win.

The full entry list for the 1996 Spanish Grand Prix is outlined below:

The full qualifying results for the 1996 Spanish Grand Prix are outlined below:

The full results for the 1996 Spanish Grand Prix are outlined below:

Damon Hill had seen his Championship lead marginally eroded as a result of the rain in Spain, although he still held a daunting seventeen point advantage. Two drivers were now within that margin, with Michael Schumacher having moved level with Jacques Villeneuve in second, although was counted behind by virtue of the Canadian ace having one eleventh place finish. Behind, Jean Alesi was back up to fourth ahead of Olivier Panis, with sixteen drivers on the score sheet.

In the Constructors Championship it had been another neutral day for Williams-Renault, who ended the weekend on 69 points at the head of the field. Ferrari were still their closest challengers, and had reduced the gap to 34 points, still more that two entire weekend's worth of points. Benetton-Renault, meanwhile, had made a little ground in third ahead of McLaren-Mercedes, while Ligier-Mugen-Honda completed the top five.