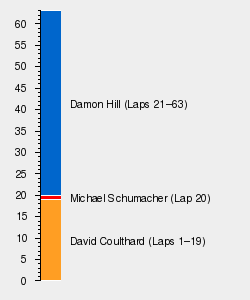 The 1996 San Marino Grand Prix, otherwise known as the 16° Gran Premio di San Marino, was the fifth round of the 1996 FIA Formula One World Championship, staged at the Autodromo Enzo e Dino Ferrari in Imola, Italy, on the 5 May 1996.[1] The race would see Damon Hill secure his fourth victory of the season to increase his daunting Championship lead, despite the efforts of Michael Schumacher to rouse the home crowd.[1]

Indeed, Italian hearts had soared when Schumacher swept to pole position in the scarlet Ferrari, with his best qualifying lap coming moments before his suspension collapsed, a sign of his efforts.[1] Hill, meanwhile, would claim second for Williams-Renault ahead of teammate Jacques Villeneuve, while David Coulthard caused a stir by putting his McLaren-Mercedes up into fourth.[1]

The Scot would go on to steal the show at the start, blasting past the two Williams and Schumacher's Ferrari to claim the lead, much to the ire of the tifosi.[1] Schumacher himself, meanwhile, would just fend off Hill to secure second after a sluggish getaway, while Mika Salo quietly leapt into fourth as others tripped over one another.[1]

Indeed, Finn would gain two places at one at Tamburello, with Jean Alesi and Villeneuve colliding to leave the Canadian with a puncture.[1] Villeneuve duly stopped at the end of the opening lap for fresh tyres, while Alesi was left to fight with teammate Gerhard Berger.[1]

Out front, meanwhile, Coulthard and Schumacher tried their best to pull clear of Hill, McLaren and Ferrari both having opted for short opening stints and low fuel in a bid to break clear.[1] That ploy ultimately failed however, with Hill stalking them a few couple of seconds behind until they made their stops.[1]

Once they were out of the way on lap 20 Hill made his bid for the lead, setting a string of strong laps as he burned off the rest of his fuel load.[1] Schumacher, meanwhile, would get the jump on Coulthard during his out-lap, adapting very quickly to his cool tyres, and duly began exchanging fastest laps with Hill out front.[1]

Hill's stop came on lap 30, and he would emerge just a few seconds ahead of the German ace, before easing away once again.[1] Schumacher stopped again on lap 40, leaving Hill with a 45 second lead, before the Brit made his final "splash and dash" with thirteen laps to go.[1]

With the fight for victory over attention would focus further down the field, with Berger inheriting third when Coulthard stalled at his second stop.[1] Other fights would also fizzle out, with Salo retiring, Alesi dropping back, and Villeneuve's charge ending with a suspension failure, having climbed to sixth.[1]

Out front, meanwhile, Hill cruised across the line to claim victory, while Schumacher secured second in his first "home" race for Ferrari.[1] Berger was a content third ahead of Eddie Irvine, with Rubens Barrichello and Alesi claiming the remaining points.[1]

Damon Hill left the Nürburgring with his Championship lead largely intact, although Jacques Villeneuve had cut the gap down to eleven points. Indeed, it seemed as if the Canadian racer would be the only real challenger to the Brit with a quarter of the season down, with third placed Jean Alesi now 23 points back. The Frenchman was not alone in third, however, with Michael Schumacher level with Alesi on ten points, and with an identical race record.

In the Constructors Championship, meanwhile, it looked to be Williams-Renault's Championship to lose, leaving the European Grand Prix with 55 points to their name. That translated into a crushing 39 point lead over Ferrari in second, meaning the Anglo-French squad could afford to miss two rounds and still hold a fair lead. Ferrari themselves, meanwhile, had moved ahead of Benetton-Renault, while McLaren-Mercedes and Jordan-Peugeot retained their places in the top five.

The full entry list for the 1996 San Marino Grand Prix is outlined below:

The full qualifying results for the 1996 San Marino Grand Prix are outlined below:

The full results for the 1996 San Marino Grand Prix are outlined below:

Damon Hill had, once again, extended his Championship lead with his fourth victory of the season, leaving Italy with 43 points to his name. His advantage over Jacques Villeneuve had therefore blossomed back out to 21 points, more than two race wins, with the Canadian now only six points ahead of Michael Schumacher in third. Elsewhere, Jean Alesi and Eddie Irvine completed the top five, with thirteen drivers on the board.

In the Constructors Championship it was, as ever, a strong afternoon's work for Williams-Renault, who left Imola with 65 points to their credit. With Ferrari on 25 points in second that meant that Williams-Renault had a 40 point lead after just five races, a daunting advantage that made all of their rivals write-off hopes of claiming the crown. Elsewhere, defending Champions Benetton-Renault were third, seven off of Ferrari, while McLaren-Mercedes had yet to break into double figures in fourth.