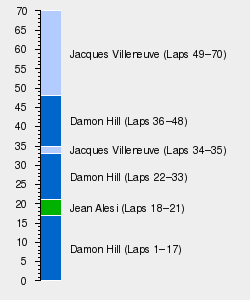 The 1996 Portuguese Grand Prix, otherwise officially known as the XXV Grande Prémio de Portugal, was the fifteenth and penultimate round of the 1996 FIA Formula One World Championship, staged on the 22 September 1996 at the Autódromo do Estoril in Estoril, Portugal.[1] The race, which was the 25th and final Portuguese Grand Prix to be staged, would see Jacques Villeneuve sweep to victory to keep his title hopes alive.[1]

The two Williams-Renaults had duelled for pole position as usual in qualifying, with Damon Hill edging out Villeneuve by just 0.009s.[1] A huge gap then followed before Jean Alesi appeared in third on the grid, with the Frenchman hoping not to get involved in the title fight ahead of him.[1]

The start of the race seemed to have ensured that Hill would win the title, with a strong start for the Brit seeing him sprint away to claim the lead.[1] He would, however, have to defend from a fast starting Alesi, who found himself brushing the grass in a bid to take the lead, while Michael Schumacher got the jump Villeneuve to relegate the Canadian down to fourth.[1]

With Alesi dealt with Hill was away, pulling out a ten second lead in the early stages, while Villeneuve remained stuck behind Alesi and Schumacher.[1] Indeed, Villeneuve could see his Championship hopes drifting away with every lap he remained behind the duo, and so he was left to try an audacious move.[1]

That move came on lap sixteen, when the trio came to lap a slow Minardi-Ford Cosworth of Giovanni Lavaggi towards the end of the lap.[1] Alesi sneaked through before Schumacher had to back off as they entered the long, fast, final corner, allowing Villeneuve to sweep right around the outside of the Ferrari to claim third.[1]

A couple of laps later and Villeneuve was in for his first stop, the Williams team opting to stop the Canadian early in hopes of jumping the Frenchman during the stops.[1] The ploy worked and Villeneuve swept past the pits as Alesi exited from his stop on lap 22, leaving the Canadian clear to chase Hill.[1]

Hill would maintain a fifteen second lead over his teammate, although that would be cut considerably when the Brit got caught behind Ukyo Katayama and Ricardo Rosset as they squabbled at the back of the field.[1] Indeed, further traffic issues for Hill saw his lead all but disappear by the time he made his second stop, with Villeneuve emerging from his second stop right on the Brit's tail.[1]

The #6 Williams remained glued to the tail of the sister car through to their third and final round of stops, where a poor out-lap for Hill, who stopped first, ultimately determined the fate of the race.[1] Indeed, Villeneuve would manage to just ease out of the pits from his stop as Hill, initially thinking it was a Tyrrell, came past the pits.[1]

With that the race was over, with Hill unable to match Villeneuve's pace during the closing stages.[1] Behind, Alesi and Schumacher enjoyed a spirited duel for third, even surviving a mid-race clash, before Schumacher grabbed the position late on with a superior strategy.[1]

Villeneuve, meanwhile, would be unconcerned, sweeping to victory ahead of Hill to close the gap to the Brit to nine points ahead of the final race.[1] Schumacher was third ahead of Alesi to grab the advantage in their fight for third in the Championship, with the remaining points heading to Eddie Irvine and Gerhard Berger, despite the pair having a collision with each other on the final tour.[1]

The results meant that Hill simply had to finish in the points in Japan to claim his maiden Championship, while Villeneuve would have to win the race.[1]

With neither Damon Hill nor Jacques Villeneuve managing to score there had been no change atop the Championship, although the results had worked in Hill's favour. Indeed, his thirteen point lead had emerged completely intact from the battle of Monza, meaning he could win the Championship if he finished ahead of Villeneuve in Portugal. Villeneuve, meanwhile, would likely have to win in Estoril just to keep his title hopes alive.

Williams-Renault had failed to score for only the second time in 1996, although they had already won the Constructors Championship. In contrast the fight for second was hotting up, with a home victory for Ferrari leaving them just three points behind Benetton-Renault with two rounds to go. McLaren-Mercedes had also inched closer to the second placed squad, and had essentially secured fourth in the Championship ahead of Jordan-Peugeot.

The full entry list for the 1996 Portuguese Grand Prix is outlined below:

The full qualifying results for the 1996 Portuguese Grand Prix are outlined below:

The full results for the 1996 Portuguese Grand Prix are outlined below:

Jacques Villeneuve scored his fourth win of the season to keep his title hopes alive, although with Damon Hill finishing second the Canadian's task was made all the more difficult. Indeed, Hill held a nine point advantage heading into the finale in Japan, meaning he would win the title if he finished in the points, regardless of what Villeneuve could achieve. For Villeneuve, however, no result other than victory would earn him the title, with the Canadian racer also needing Hill to fail to score.

The Constructors Championship had seen Williams-Renault open out a 100 point lead after their fifth one-two of the season, leaving Portugal on 165 points. Behind, however, there was just a point between Benetton-Renault in second and Ferrari in third, with those two set to duel for the runner-up spot at the finale. McLaren-Mercedes, meanwhile, were out of the fight for second and third, but had secured fourth ahead of Jordan-Peugeot.