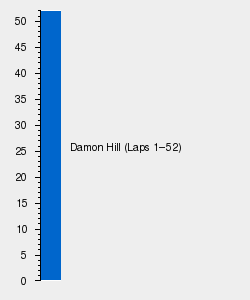 The 1996 Japanese Grand Prix, otherwise officially known as the XXII Fuji Television Japanese Grand Prix (XXII フジテレビ日本グランプリ in Japanese), was the sixteenth and final round of the 1996 FIA Formula One World Championship, staged at the Suzuka Circuit in Mie Prefecture, Japan, on the 13 October.[1] The race would be dominated by Damon Hill, with the Brit also creating history by becoming the first son of a former Champion to win a World Championship.[1]

The only man who could have denied Hill heading into the finale was his Williams-Renault teammate Jacques Villeneuve, and it was the Canadian racer who claimed pole position ahead of Hill.[1] Michael Schumacher was a second off the pace in third for Ferrari, with a further second separating Schumacher from his teammate Eddie Irvine in sixth.[1]

It had rained for most of the weekend, and so when it dawned bright and warm on Sunday there was some confusion over how to setup the cars.[1] Regardless, Villeneuve had topped the warm-up to suggest he was in the best position, although he knew the fate of his title hopes would be settled at the start.[1]

The start itself would be rather anti-climatic, largely because David Coulthard stalled and caused it to be aborted.[1] The field were duly sent around on a second formation lap, with the Scot lining up at the back, with tensions rising again as they lined-up on the grid once again.[1]

Ultimately it was Hill who mastered his nerves best, making a perfect getaway to launch into the lead, while Villeneuve made a miserable start.[1] Indeed, as Hill disappeared into the first corner all on his own Villeneuve was swamped by Gerhard Berger, a fast starting Mika Häkkinen and the two Ferraris.[1]

Hill instantly eased off the pace, allowing Berger and co. to remain with him during the early laps.[1] That tactic may have been rather foolish as it left him vulnerable to attack, as proved by an overly ambitious lunge from Berger that resulted in the front wing of the Benetton-Renault getting chewed apart by the rear wheel of Hill's Williams.[1]

Miraculously Hill escaped without picking up a puncture, and with Berger having to complete a full lap, was able to establish a four second lead.[1] Berger, meanwhile, would stop at the end of lap four to replace his nose, promoting Häkkinen into second, and Villeneuve, having got ahead of Irvine, into fourth behind Schumacher.[1]

The race would, however, develop into a procession, with Villeneuve unable to get ahead of the two drivers in front, while Hill was cruising out front.[1] Indeed, the order would go unchanged through the first and second pit phases, before Villeneuve's title bid came to an end.[1]

Indeed, five laps into his second stint the Canadian would be sent into a huge spin heading into turn one, his right-rear wheel having flown off the car.[1] Villeneuve's hopes duly came to an end as he slid to a stop in huge cloud of gravel, leaving the Canadian to make a slow march back to the pits.[1]

That brought an end to the 1996 FIA Formula One World Championship, which had seen one man emulate his father, and another set himself on the path to best his father. It would also be the final race for Ligier, which would sell itself to a new project headlined by Alain Prost, as well as the end of BBC Sport's live television coverage of F1 until 2009.

Jacques Villeneuve scored his fourth win of the season to keep his title hopes alive, although with Damon Hill finishing second the Canadian's task was made all the more difficult. Indeed, Hill held a nine point advantage heading into the finale in Japan, meaning he would win the title if he finished in the points, regardless of what Villeneuve could achieve. For Villeneuve, however, no result other than victory would earn him the title, with the Canadian racer also needing Hill to fail to score.

The Constructors Championship had seen Williams-Renault open out a 100 point lead after their fifth one-two of the season, leaving Portugal on 165 points. Behind, however, there was just a point between Benetton-Renault in second and Ferrari in third, with those two set to duel for the runner-up spot at the finale. McLaren-Mercedes, meanwhile, were out of the fight for second and third, but had secured fourth ahead of Jordan-Peugeot.

The full entry list for the 1996 Japanese Grand Prix is outlined below:

The full practice results for the 1996 Japanese Grand Prix are outlined below:

The full qualifying results for the 1996 Japanese Grand Prix are outlined below:

The full results for the 1996 Japanese Grand Prix are outlined below:

With that Damon Hill was crowned as the 1996 FIA Formula One World Championship Champion, ending the season on 97 points. The rookie Jacques Villeneuve ended the season nineteen behind in second on 78 points, while Michael Schumacher was a distant third on 59. Jean Alesi was next on 47 points, while Mika Häkkinen secured fifth on 31 points.

In the Constructors Championship Williams-Renault would round out the season on a crushing tally of 175 points, 105 more than the team in second. That team was Ferrari, who moved two points clear of Benetton-Renault on the final day to finish as runner-up to the Anglo-French effort, with Benetton-Renault hence slipping to third. McLaren-Mercedes were next in a lonely fourth, with Jordan-Peugeot completing the top five.