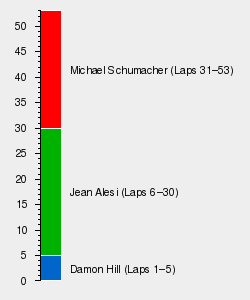 The LXVII Pioneer Gran Premio d'Italia, otherwise known as the 1996 Italian Grand Prix, was the fourteenth race of the 1996 FIA Formula One World Championship, staged at the Autodromo Nazionale Monza in Monza, Italy, on the 8 September 1996.[1] The race would see Michael Schumacher sweep to a popular victory for Ferrari, their first on home soil since 1988, as the two Williams-Renaults crashed out.[1]

As usual the two Williams' had been the men to dominate qualifying, with Championship leader Damon Hill claiming pole position ahead of teammate Jacques Villeneuve.[1] Schumacher was half a second away in third ahead of Mika Häkkinen in his McLaren-Mercedes, while Eddie Irvine in the sister Ferrari was down in seventh.[1]

Overnight on Sunday there would be a re-positioning of tyre barriers at the two chicanes, with large bundles moved right to the edge of the apexes to prevent kerb hopping.[1] The drivers were particularly unhappy with the change, although the Grand Prix Drivers' Association failed to muster a challenge.[1]

The start of the race itself saw all of the top four drivers make poor starts, resulting in Jean Alesi streaking through into third.[1] That appeared to be as far as the Frenchman would get, only for an aggressive defensive move from Hill to defend from Villeneuve to open the door for Alesi into the Rettifilo.[1]

Alesi was hence gifted the lead through Curva Grande, with Hill, Villeneuve, Häkkinen, Coulthard and Schumacher falling into line behind.[1] However, Hill, who could win the title in Italy, was determined to escape from Villeneuve, and duly scythed past Alesi through Lesmo to claim the lead.[1]

Villeneuve was passed by Häkkinen on the run out of Parabolica, before bending his front suspension by clipping the tyre bundle at the second chicane.[1] The tyres duly rebounded on their mounting point and smacked into Coulthard, destroying the Scot's steering.[1]

Schumacher was hence left in fourth, while Hill, out front was easing clear of Alesi at an impressive pace.[1] Indeed, Alesi was throwing his Benetton-Renault around as hard as he could in hopes of remaining with the Williams, and duly clipped the barriers at the second chicane.[1]

Once again the tyres rebounded and smacked into the car behind, smashing the front wing on Häkkinen's McLaren.[1] The Finn completed a full lap before coming in to replace his nose, slumping to the back of the pack as Schumacher move into third.[1]

A couple of laps later and Hill was out completely, a rear-wheel clip on the tyre barriers at the first chicane pitching the Brit's Williams into an engine stalling spin.[1] Alesi was hence left in the lead ahead of Schumacher, with the German knowing that his best hope of getting ahead of the Benetton would come during the pitstops.[1]

That ultimately, proved to be the key, with a three lap period between Alesi and Schumacher's stops seeing the German go from 0.6s behind the Benetton, to over five seconds in front.[1] However, as Schumacher pulled clear on fresh tyres he very nearly managed to have the same accident as Hill at the first chicane, meaning he could hardly relax.[1]

With that the race was over, with Schumacher nursing his car, unsure of how damaged it was to the chequered flag, causing an eruption from the thousands of tifosi lining the circuit.[1] Alesi was a content second ahead of Häkkinen, while Martin Brundle, Rubens Barrichello and Pedro Diniz secured the remaining points having survived to the end.[1]

Damon Hill had seen his Championship lead cut to thirteen points after his pit issues, although teammate Jacques Villeneuve believed he should have taken more out of the Brit's lead. Indeed, Villeneuve was genuinely expecting to challenge for the title in his maiden F1 season, although he knew he would have to take more than four points a race out of Hill's advantage. Behind Michael Schumacher had moved back into third, a point ahead of Jean Alesi, with Mika Häkkinen completing the top five.

In the Constructors Championship Williams-Renault had ended the weekend on 149 points, moving them 94 points clear of second placed Benetton-Renault. Indeed, the now Italian registered team had also lost ground to Ferrari in third, with just seven point separating the two with three rounds to go. McLaren-Mercedes were seven further back in fourth, meaning they were still in the hunt, while Jordan-Peugeot were a distant fifth.

The full entry list for the 1996 Italian Grand Prix is outlined below:

The full qualifying results for the 1996 Italian Grand Prix are outlined below:

The full results for the 1996 Italian Grand Prix are outlined below:

With neither Damon Hill nor Jacques Villeneuve managing to score there had been no change atop the Championship, although the results had worked in Hill's favour. Indeed, his thirteen point lead had emerged completely intact from the battle of Monza, meaning he could win the Championship if he finished ahead of Villeneuve in Portugal. Villeneuve, meanwhile, would likely have to win in Estoril just to keep his title hopes alive.

Williams-Renault had failed to score for only the second time in 1996, although they had already won the Constructors Championship. In contrast the fight for second was hotting up, with a home victory for Ferrari leaving them just three points behind Benetton-Renault with two rounds to go. McLaren-Mercedes had also inched closer to the second placed squad, and had essentially secured fourth in the Championship ahead of Jordan-Peugeot.