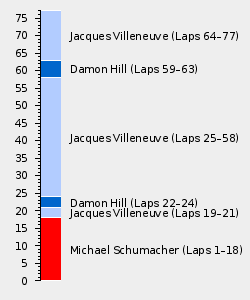 The 1996 Hungarian Grand Prix, otherwise officially advertised as the XII Marlboro Magyar Nagydíj, was the twelfth round of the 1996 FIA Formula One World Championship, staged at the Hungaroring near Budapest, Hungary, on the 11 August 1996.[1] The race would see Jacques Villeneuve beat teammate Damon Hill to victory to secure the World Constructors Championship for Williams-Renault, leaving Williams level with Ferrari on the all-time list with eight titles.[1]

Qualifying had seen the two Williams' beaten to pole position, however, with Michael Schumacher sneaking to top spot by just 0.053s.[1] Championship leader Hill was his closest challenger ahead of Villeneuve, before a 1.3 second gap back to Eddie Irvine in fourth.[1]

Strategy would play a big part in the race, with Villeneuve opting for a three stop race, while Hill tried a two stop.[1] Schumacher, meanwhile, would opt for a three stop the same as Villeneuve, knowing that the Hungaroring was one of the hardest circuits to pass on, regardless of pace difference.[1]

The start of the race would be dictated by which side of the grid a driver started, with those on the clean side having far better getaways.[1] Indeed, Schumacher, Villeneuve and Jean Alesi, starting first, third and fifth, would head into the first corner first, second and third, while Hill, Irvine and Gerhard Berger slipped to fourth, fifth and sixth.[1]

Hill's hopes of victory evaporated during those early laps, with the Brit simply unable to get past Alesi, in spite of the Frenchman almost throwing his car off at the first corner.[1] Indeed, Alesi's lack of pace compared to those around him was dramatically shown by Schumacher and Villeneuve, who sprinted clear of the Benetton-Renault by over a second a lap.[1]

Indeed, it was only when Alesi ventured into the pits for his first stop that Hill finally showed his pace, setting fastest lap before getting mired in lapped traffic.[1] That, ultimately, saw Hill slip back behind Alesi as he ventured out of the pits, with the Frenchman dramatically swinging across the circuit to prevent Hill lunging inside of the Benetton into turn one.[1]

Out front, meanwhile, it was a similar battle, with Villeneuve able to extend his first stint and still remain glued to the slower Ferrari's tail.[1] When Schumacher stopped the Canadian was released, and two quick laps prior to his stop ensured that the #6 Williams emerged ahead of the #1 Ferrari, despite spending more time in the pits.[1]

With that Villeneuve was away, Schumacher simply unable to match the pace of the fuelled up Williams.[1] Behind Alesi finally made a mistake to gift Hill third place, the Frenchman sliding wide at turn one, with the Brit instantly lapping two seconds a lap faster in his pursuit of Schumacher.[1]

However, Williams had different ideas, and moments after Schumacher and Villeneuve made their second stops, Hill was brought into the pits, the team deciding to try and avoid any traffic rather than go for track position.[1] The Brit was hence sent out with a smaller fuel load then planned and told to hunt down Schumacher, with twelve seconds separating them.[1]

Williams' new plan was to pit Hill the moment that he caught the back of the Ferrari, although that was hastily reverted when someone realised that Ferrari would simply pit Schumacher at the same time to remain ahead.[1] The Williams crew therefore charged into the pitlane and forced Ferraris hand, only to tell Hill to stay out.[1]

Ferrari fell for their trick beautifully, with Schumacher sweeping into the pitlane while Hill charged past.[1] The Brit duly set a succession of fastest laps before coming in for a splash and dash eleven laps later, a charge that brought him perilously close to teammate Villeneuve after the Canadian had a slow third stop.[1]

Ultimately Hill would catch Villeneuve on the penultimate lap, resulting in a two lap high-speed duel through backmarkers.[1] Yet, Villeneuve would hang on to claim victory ahead of his teammate, a result which left Williams as Constructors Champions with four races to spare.[1]

Behind, Schumacher was set for third, only for a throttle issue in the closing stages to end his race prematurely.[1] Alesi was hence promoted onto the podium ahead of Mika Häkkinen, while Olivier Panis and Rubens Barrichello completed the scorers.[1]

Damon Hill moved 21 points clear at the head of the Championship as a result of his seventh win of the season, ending the German weekend on 73 points. Jacques Villeneuve remained his closest challenger, with the Canadian racer himself holding a 21 point lead over the man in third. That driver would be Jean Alesi, who moved two clear of Michael Schumacher, with both needing a strong result in Hungary to stay in the hunt.

In the Constructors Championship the fight was effectively over, with Williams-Renault moving onto 125 points. Benetton-Renault left Germany as the only constructor capable of defeating their similarly engined rivals, although with 78 points splitting the pair at the end of the German weekend. Benetton were therefore set to fight with Ferrari for second, with McLaren-Mercedes not too far behind in fourth.

The full entry list for the 1996 Hungarian Grand Prix is outlined below:

The full qualifying results for the 1996 Hungarian Grand Prix are outlined below:

The full results for the 1996 Hungarian Grand Prix are outlined below:

Victory for Jacques Villeneuve ensured that the battle for Championship was still an active one with four rounds to go, the Canadian racer leaving Hungary seventeen behind his teammate. Indeed, Damon Hill would all but win the Championship in Belgium if he won with Villeneuve failing to score, with the Canadian now officially the only man who could deny him a maiden title. Behind Jean Alesi had inched away from Michael Schumacher in third, while Mika Häkkinen moved into the top five.

The fight for the Constructors Championship, meanwhile, was officially over, with Williams-Renault leaving Budapest with a 90 point lead over Benetton-Renault. With only 64 points left to fight for it was therefore impossible for the Italian registered team to get back on terms, meaning Williams had their fourth title in five seasons. Benetton were therefore in a fight to finish second, having inched further away from Ferrari and McLaren-Mercedes.

Retrieved from "https://f1.fandom.com/wiki/1996_Hungarian_Grand_Prix?oldid=84591"
Community content is available under CC-BY-SA unless otherwise noted.