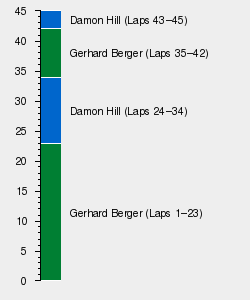 The 1996 German Grand Prix, otherwise officially known as the LVIII Großer Mobil 1 Preis von Deutschland, was the eleventh round of the 1996 FIA Formula One World Championship, staged at the Hockenheimring in Baden-Württemberg, Germany, on the 28 July 1996.[1] The race would see Damon Hill secure his twentieth career victory on his march to the 1996 World Championship, albeit a win that came in fortuitous circumstances.[1]

The Brit, as usual, would grab pole position during qualifying, although it took a last gasp run effort from the #5 Williams-Renault pilot to do so.[1] Indeed, Hill's late run would break the hearts of the hoard of fans supporting Michael Schumacher, with the defending World Champion having to settle for second ahead of Gerhard Berger.[1]

Raceday dawned dark but dry, with the warm-up resulting in the two Mercedes engined McLarens at the top of the timesheets.[1] However, heavy rain swept across the circuit to ensure that an additional session was held, with teams trying hastily prepared wet setups.[1]

Yet, when the race start time did arrive the circuit was dry, meaning all nineteen starters would use full slick tyres.[1] Hill duly lined-up on pole to start as the overwhelming favourite, only to make a mess of his launch.[1]

Fortunately for Hill his poor start was matched by Schumacher, and hence allowed the two Benetton-Renaults of Berger and Jean Alesi to charge into the lead.[1] Mika Häkkinen tried to go with them only for Schumacher to squeeze him towards the pitwall, allowing Hill to get away in third ahead of Schumacher, while Häkkinen tumbled down to eighth.[1]

The two Benettons tried their best to escape from Hill, with the top three quickly breaking clear.[1] Behind, Jacques Villeneuve tried his best to get ahead of Schumacher, only to lose out to David Coulthard at the first chicane.[1]

Back with the leaders and Hill was stuck behind the Benettons, clearly faster but unable to launch an attack into the chicanes.[1] Williams therefore decided to alter the Brit's strategy, making him run longer on his first stint, before trying a short sprint mid-race while the Benetton's were in the pit lane.[1]

The ploy seemed to work, with Hill setting consecutive new lap records after his stop, which translated to a sixteen second lead after Berger made his stop.[1] However, when Hill rejoined from his second stop he would appear behind Berger, but crucially ahead of Alesi.[1]

That left Berger to defend from Hill alone, with the Brit quickly pulling onto the back of the Benetton and begin his bid for the lead.[1] However, Berger would resist the #5 Williams' first attacks, and as the laps ticked away Hill looked less and less likely to get past the Benetton.[1]

Behind, Alesi was in a lonely third, while Villeneuve had finally broken clear of Schumacher and Coulthard to secure fourth during the stops.[1] That had left the German and the Scot to fight amongst themselves, with the McLaren weaving around in the Ferrari's mirrors as the race wore on.[1]

Indeed, it seemed as if that would be how the top six finished, only for Berger's engine to fail on the run to the Clark chicane with just three laps to go.[1] Hill duly swept past to secure the lead, with a frustrated Berger left to rue his luck at the side of the circuit.[1]

That was the final action of the race, with Hill sweeping across the line to secure victory, in spite of the fact that Olivier Panis had accidentally been shown the chequered flag first.[1] Behind Hill came Alesi and Villeneuve, while Schumacher fended off Coulthard to secure fourth with Rubens Barrichello rounding out the scorers.[1]

Jacques Villeneuve had cut the gap to the top of the Championship after his second victory of the campaign, leaving Silverstone fifteen behind Damon Hill out front. Indeed, while it was still the Brit's Championship to lose, Villeneuve's win ensured that he was the man most likely to take the crown away from Hill in the remaining six rounds. Behind Michael Schumacher and Jean Alesi had held station in third and fourth, while Gerhard Berger had leapt up to fifth.

In the Constructors Championship Williams-Renault had inched closer to the title, leaving Silverstone with 111 points to their name. Benetton-Renault had secured second, but had also slipped 70 points behind, with 96 points left to fight for across the rest of the campaign. Ferrari, meanwhile, had slipped six behind the Benetton team, with McLaren-Mercedes closing in in fourth, leaving their home race just three behind the fabled Scuderia.

The full entry list for the 1996 German Grand Prix is outlined below:

The full qualifying results for the 1996 German Grand Prix are outlined below:

The full results for the 1996 German Grand Prix are outlined below:

Damon Hill moved 21 points clear at the head of the Championship as a result of his seventh win of the season, ending the German weekend on 73 points. Jacques Villeneuve remained his closest challenger, with the Canadian racer himself holding a 21 point lead over the man in third. That driver would be Jean Alesi, who moved two clear of Michael Schumacher, with both needing a strong result in Hungary to stay in the hunt.

In the Constructors Championship the fight was effectively over, with Williams-Renault moving onto 125 points. Benetton-Renault left Germany as the only constructor capable of defeating their similarly engined rivals, although with 78 points splitting the pair at the end of the German weekend. Benetton were therefore set to fight with Ferrari for second, with McLaren-Mercedes not too far behind in fourth.