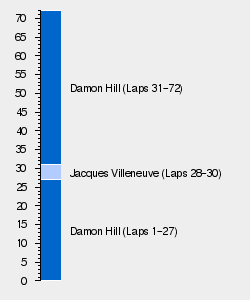 The 1996 French Grand Prix, otherwise known as the LXXXII Grand Prix de France, was the ninth round of the 1996 FIA Formula One World Championship, staged on the 30 June 1996 at the Circuit de Nevers Magny-Cours in Magny-Cours, France.[1] The race would see Damon Hill and Jacques Villeneuve secure the fourth one-two of the season for Williams-Renault, after another dominant performance.[1]

Qualifying, however, had not gone Williams' way, for a mistake from Hill on his final lap opened the door for Michael Schumacher to claim pole position for Ferrari.[1] Hill therefore had to settle for second ahead of Jean Alesi, while Villeneuve would start from sixth after crashing mid-session.[1]

The warm-up would see Hill clash with Heinz-Harald Frentzen having been distracted by something in the cockpit, although he would receive no punishment.[1] Villeneuve, meanwhile, would end up fastest despite using his hastily built spare car, while several drivers, including Schumacher and David Coulthard had brake issues.[1]

Indeed, it was the start of a day to forget for Schumacher, whose engine expired midway around the formation lap.[1] The German was out and a long way from the pitlane, effectively handing Hill a perfect opportunity to grab the lead at the start.[1]

Hill duly aced the start and sprinted clear, leaving Alesi to fend off the attention's of Gerhard Berger to secure second.[1] Fortunately for him a hard charging Mika Häkkinen would elbow his way past the Austrian, a move which also opened the door for Villeneuve to barge past.[1]

Villeneuve subsequently found himself stuck behind Häkkinen during the early stages, allowing Alesi to secure second as Hill eased away out front.[1] Indeed, the Finn's resistance was such the Villeneuve only managed to jump the McLaren-Mercedes during the first pit-window, with a series of quick laps in clean air carrying him past Häkkinen.[1]

Once clear of the #7 McLaren Villeneuve would sweep onto the back of Alesi in second, before scything past the Benetton-Renault on the brakes for the Adelaide hairpin.[1] The Canadian duly went chasing off after Hill, setting a series of fastest laps in a vain bid to catch his teammate.[1]

Elsewhere, Berger would manage to get ahead of Häkkinen during the second pitstop phase, and duly hunted down teammate Alesi in the closing stages.[1] Elsewhere, Olivier Panis was delivering one of his best performances, setting the second fastest lap overall in a bid to catch sixth placed Coulthard, having lost a lot of time early on having been stuck in a long train of cars trailing Pedro Diniz.[1]

Out front, meanwhile, Hill was left to claim a comfortable victory ahead of Villeneuve, his sixth of the season and the fourth one-two for Williams.[1] Alesi completed the podium after fending off teammate Berger's late charge, while Häkkinen and Coulthard collected the remaining points for McLaren-Mercedes.[1]

Damon Hill extended his Championship lead after his fifth win of the season, leaving Canada with a 21 point lead. Jacques Villeneuve left his home race as the main pretender to the Brit at the halfway point, having moved six clear of Michael Schumacher in third. The top five was then completed by Jean Alesi and David Coulthard, with sixteen drivers having scored in the first half of the season.

The full entry list for the 1996 French Grand Prix is outlined below:

The full qualifying results for the 1996 French Grand Prix are outlined below:

The full results for the 1996 French Grand Prix are outlined below:

A sixth victory in nine races left Damon Hill in complete command of the Championship, ending the weekend on 63 points. That equated to a 25 point advantage over Jacques Villeneuve in second, with the Canadian racer likely to be the only pretender to the Brit for the rest of the season. Indeed, Michael Schumacher had slipped 37 points behind after his pre-race engine failure, with Jean Alesi just a point behind the German racer in fourth.

In the Constructors Championship it was Williams-Renault who once again ended a Grand Prix weekend as the best team, leaving France with 101 points. A huge 66 point gap followed before Ferrari appeared in second, level on points with defending Champions Benetton-Renault in third, separated by Ferrari's lone victory. McLaren-Mercedes were nine points behind in fourth, with Ligier-Mugen-Honda in fifth.