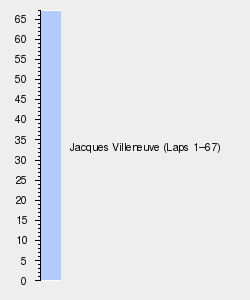 The 1996 European Grand Prix, otherwise known as the XLI Großer Preis von Europa, was the fourth round of the 1996 FIA Formula One World Championship, staged at the Nürburgring near Nürburg, Germany, on the 28 April 1996.[1] The race would see Jacques Villeneuve sweep to his first Grand Prix victory in only his fourth race, almost fifteen years after his father Gilles Villeneuve's final win in 1981.[1]

The weekend would begin in a similar fashion to the previous rounds in 1996, with Damon Hill sweeping to pole position, three quarters of a second clear of Williams-Renault teammate Villeneuve.[1] Michael Schumacher was best of the rest in third for Ferrari, with Jean Alesi completing the top four for Benetton-Renault.[1]

Raceday dawned cold and misty, although the worst of the mist would burn off before the start despite the skies remaining rather dull.[1] Fortunately the start would be anything but dull, with Hill, Schumacher and Alesi making poor getaways.[1]

That allowed Villeneuve to take the lead off the grid, although it was David Coulthard who stole the show, streaking from sixth to second in the McLaren-Mercedes.[1] Another man to make an impressive start was Rubens Barrichello, streaking up to third, while Schumacher scrambled ahead of Hill to secure fourth.[1]

With Coulthard behind him Villeneuve was able to escape up the road, for the McLaren, while fast on the straight, was not able to match the Williams in the corners.[1] However, it also made the Scot hard to pass, with Barrichello, Schumacher and Hill unable to get past.[1]

Indeed, Schumacher was so focused on passing Barrichello's Jordan-Peugeot that he almost forgot the presence of Hill, and hence slipped wide after a lunge around the outside of the McLaren and let Hill slip through to fourth.[1] Hill then tried in vain to find a way past the Brazilian, before the #5 Williams began to drop back from the Jordan shortly before the stops.[1]

Hill duly made an early stop for a quick check on his car, resulting in both Patrick Head and Adrian Newey sliding under the car in the pitlane for a look.[1] They could not see anything and so Hill was released, albeit having lost twelve seconds to the Coulthard company.[1]

Indeed, there would be some other major shuffles, with Schumacher leaping into second after a stunning stop from Ferrari, while Barrichello slipped back towards Mika Häkkinen after a slow stop.[1] Villeneuve, meanwhile, would look imperious out front, although after the stops it was Schumacher who dictated the pace.[1]

Schumacher duly caught the back of the Canadian with fifteen laps to go, and steadily wound up the pressure in a bid to claim the lead.[1] As their fight played out Hill would lose more time with a trip through the gravel, having aborted an attempt to pass Pedro Diniz, and hence had to work his way back up the order from tenth.[1]

Out front, meanwhile, Villeneuve would resist Schumacher through to the chequered flag, securing a memorable maiden victory on the German's home soil.[1] Coulthard, meanwhile, would have to work hard in the closing stages to keep Hill at bay to complete the podium, with Rubens Barrichello having also joined their fight.[1] Less than a second covered the trio as they crossed the finish line.[1]

The full entry list for the 1996 European Grand Prix is outlined below:

The full qualifying results for the 1996 European Grand Prix are outlined below:

The full results for the 1996 European Grand Prix are outlined below:

Damon Hill left the Nürburgring with his Championship lead largely intact, although Jacques Villeneuve had cut the gap down to eleven points. Indeed, it seemed as if the Canadian racer would be the only real challenger to the Brit with a quarter of the season down, with third placed Jean Alesi now 23 points back. The Frenchman was not alone in third, however, with Michael Schumacher level with Alesi on ten points, and with an identical race record.

In the Constructors Championship, meanwhile, it looked to be Williams-Renault's Championship to lose, leaving the European Grand Prix with 55 points to their name. That translated into a crushing 39 point lead over Ferrari in second, meaning the Anglo-French squad could afford to miss two rounds and still hold a fair lead. Ferrari themselves, meanwhile, had moved ahead of Benetton-Renault, while McLaren-Mercedes and Jordan-Peugeot retained their places in the top five.