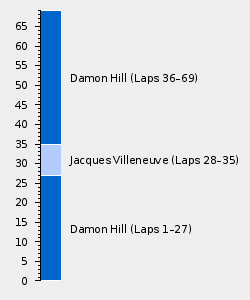 The XXXIV Grand Prix Molson du Canada, otherwise known as the 1996 Canadian Grand Prix, was the eighth round of the 1996 FIA Formula One World Championship, staged at the Circuit Gilles Villeneuve in Montreal, Quebec, Canada, on the 16 June 1996.[1] The race would see Williams-Renault teammates Damon Hill and Canada's newest hero Jacques Villeneuve duel for victory, with the Brit ultimately coming out on top.[1]

Hill would deliver the first blow of the weekend, securing pole position ahead of the Canadian racer in qualifying by just 0.020s.[1] Best of the rest proved to be defending Champion Michael Schumacher in his Ferrari, a tenth behind, before a gap back to fourth placed Jean Alesi.[1]

Williams would start the race as favourites, with the fans having an undoubted favourite of their own.[1] However, Hill had convinced the Williams team to put him on a different strategy, gambling on a low-fuel first stint in hopes of breaking away from the Canadian racer early on.[1]

Ultimately it was Villeneuve who made the better getaway, although Hill acted quickly to seize the inside line and prevent the Canadian racer front lunging past.[1] With that Hill was away, opening out a two second lead on the opening lap as Villeneuve was left to fend off the advances of Alesi.[1]

Villeneuve too would soon break away from the rest of the pack, with the gap between himself and Hill stabilising at eleven seconds.[1] Schumacher, meanwhile, had been forced to start from the back after stalling on the dummy grid, meaning he was fighting his way up from the back of the field.[1]

Hill made his first stop on lap 28, with Villeneuve inheriting a seven second lead which would remain until the Canadian made his first, and only stop, a few laps later.[1] Hill duly pushed on to build an advantage big enough to make his second stop without losing the lead, knowing that Villeneuve would have to nurse his tyres to make the finish.[1]

As their strategic duel worked itself out there were changes behind, albeit largely due to retirement rather than action.[1] Indeed, the latest Benetton-Renault battle would end in familiar fashion, Gerhard Berger once again spinning himself out, while Rubens Barrichello lost a promising fourth when his clutch failed.[1] Schumacher, meanwhile, would get as high as tenth before his race stalled, a driveshaft failing as he pulled out of the pits.[1]

Back with the leaders and Hill's push had worked beautifully, the Brit emerging from his second stop with ten seconds between himself and Villeneuve.[1] With that the fight for victory was effectively over, although the French-Canadian did his best to raise his supporter's hopes.[1]

Indeed, a thrilling series of fastest laps saw Villeneuve obliterate the gap between himself and Hill, with just a second separating them with a few laps to go.[1] However, Hill would react and keep his teammate at bay, and duly collected victory to deny Villeneuve a famous victory on the circuit named for his father.[1]

Behind them to complete the podium was a lonely Alesi, while David Coulthard was the last man on the lead lap for McLaren-Mercedes.[1] Mika Häkkinen and Martin Brundle then completed the points scorers, with Johnny Herbert and Giancarlo Fisichella the only other finishers.[1]

Damon Hill had seen his Championship lead marginally eroded as a result of the rain in Spain, although he still held a daunting seventeen point advantage. Two drivers were now within that margin, with Michael Schumacher having moved level with Jacques Villeneuve in second, although was counted behind by virtue of the Canadian ace having one eleventh place finish. Behind, Jean Alesi was back up to fourth ahead of Olivier Panis, with sixteen drivers on the score sheet.

In the Constructors Championship it had been another neutral day for Williams-Renault, who ended the weekend on 69 points at the head of the field. Ferrari were still their closest challengers, and had reduced the gap to 34 points, still more that two entire weekend's worth of points. Benetton-Renault, meanwhile, had made a little ground in third ahead of McLaren-Mercedes, while Ligier-Mugen-Honda completed the top five.

The full entry list for the 1996 Canadian Grand Prix is outlined below:

The full qualifying results for the 1996 Canadian Grand Prix are outlined below:

The full results for the 1996 Canadian Grand Prix are outlined below:

Damon Hill extended his Championship lead after his fifth win of the season, leaving Canada with a 21 point lead. Jacques Villeneuve left his home race as the main pretender to the Brit at the halfway point, having moved six clear of Michael Schumacher in third. The top five was then completed by Jean Alesi and David Coulthard, with sixteen drivers having scored in the first half of the season.

Retrieved from "https://f1.fandom.com/wiki/1996_Canadian_Grand_Prix?oldid=84556"
Community content is available under CC-BY-SA unless otherwise noted.