Formula 1 Wiki
Register
Don't have an account?
Sign In
Advertisement
in: British Grand Prix, 1996 Grands Prix, Formula One races in the United Kingdom 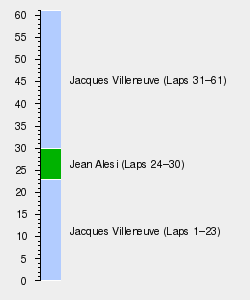 The 1996 British Grand Prix, otherwise known as the XLIX RAC British Grand Prix, was the tenth round of the 1996 FIA Formula One World Championship, staged at the Silverstone Circuit in Northamptonshire, UK, on the 14 July 1996.[1] The race would see Jacques Villeneuve sweep to his second victory of his rookie season for Williams-Renault, as teammate and Championship leader Damon Hill retired mid-race.[1]

It was Hill who had led the way after qualifying, securing pole position two tenths clear of Villeneuve.[1] Michael Schumacher was, as ever, best of the rest for Ferrari, while Mika Häkkinen secured fourth for McLaren-Mercedes.[1]

However, Hill's hopes of victory were curtailed right at the start, as he made a poor getaway from the grid and tumbled down the order.[1] Villeneuve and Häkkinen were marginally better, while Schumacher just managed to beat the Brit too.[1] In contrast, Jean Alesi would be the man to watch, with the #3 Benetton-Renault streaking through to challenge Villeneuve into Stowe.[1]

Villeneuve would, however, hold on and secure the lead, although both he and Alesi were able to escape up the road.[1] Häkkinen was next ahead of Schumacher and Hill, although it was not long before Schumacher dropped out, a gearbox failure caused by an oil leak ending his race on lap six.[1]

With Schumacher out of the way Hill was able to catch the back of Häkkinen, although the Finn placed his McLaren masterfully to prevent the Brit from making a move.[1] Furthermore, Häkkinen had his own ambitions of making ground, finding himself stuck behind Alesi's second placed Benetton once the Frenchman had been dropped by Villeneuve.[1]

Indeed, Villeneuve was really pushing before the first pitstop phase, trying to build as big a lead as possible in case Hill broke through into second.[1] There would, however, be no change to the order after the first stops, with Alesi briefly leading before he made his stop.[1]

Hill, however, would not get to make his stop, instead reporting an issue at the front of his car that was causing a lot of understeer.[1] Eventually the mounting pegs on his front left wheel failed and sent the Brit skating off the circuit at Copse, leaving the British fans to cheer on David Coulthard at the lower end of the top ten.[1]

Hill's disappearance left Häkkinen clear to attack Alesi, although after the stops the McLaren would be unable to match the pace of the Frenchman.[1] He duly slipped back behind Gerhard Berger in the second Benetton after his second stop, with the Austrian racer going on to try and challenge his teammate Alesi for second.[1]

Alesi's second stop would drop the #3 Benetton into Berger's sights, although a brake failure for the Frenchman ended their fight before it began.[1] Berger was hence left in a lonely second behind Villeneuve, who was cruising to the chequered flag knowing that only mechanical strife would rob him of victory.[1]

With that the race was over, with Villeneuve duly sweeping across the line to secure his second win in his rookie year.[1] Berger and Häkkinen were separated by over half a minute as they completed the podium, while Rubens Barrichello, Coulthard and Martin Brundle secured the remaining points.[1]

A sixth victory in nine races left Damon Hill in complete command of the Championship, ending the weekend on 63 points. That equated to a 25 point advantage over Jacques Villeneuve in second, with the Canadian racer likely to be the only pretender to the Brit for the rest of the season. Indeed, Michael Schumacher had slipped 37 points behind after his pre-race engine failure, with Jean Alesi just a point behind the German racer in fourth.

In the Constructors Championship it was Williams-Renault who once again ended a Grand Prix weekend as the best team, leaving France with 101 points. A huge 66 point gap followed before Ferrari appeared in second, level on points with defending Champions Benetton-Renault in third, separated by Ferrari's lone victory. McLaren-Mercedes were nine points behind in fourth, with Ligier-Mugen-Honda in fifth.

The full entry list for the 1996 British Grand Prix is outlined below:

The full qualifying results for the 1996 British Grand Prix are outlined below:

The full results for the 1996 British Grand Prix are outlined below:

Jacques Villeneuve had cut the gap to the top of the Championship after his second victory of the campaign, leaving Silverstone fifteen behind Damon Hill out front. Indeed, while it was still the Brit's Championship to lose, Villeneuve's win ensured that he was the man most likely to take the crown away from Hill in the remaining six rounds. Behind Michael Schumacher and Jean Alesi had held station in third and fourth, while Gerhard Berger had leapt up to fifth.

In the Constructors Championship Williams-Renault had inched closer to the title, leaving Silverstone with 111 points to their name. Benetton-Renault had secured second, but had also slipped 70 points behind, with 96 points left to fight for across the rest of the campaign. Ferrari, meanwhile, had slipped six behind the Benetton team, with McLaren-Mercedes closing in in fourth, leaving their home race just three behind the fabled Scuderia.