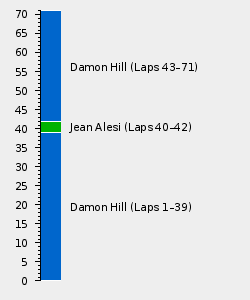 The 1995 Brazilian Grand Prix, otherwise officially known as the XXV Grande Prêmio do Brasil, was the second round of the 1996 FIA Formula One World Championship, staged at the Autódromo José Carlos Pace in São Paulo, Brazil, on the 31 March 1996.[1] The race would see Damon Hill secure a dominant victory ahead of Jean Alesi, having lapped arch-rival Michael Schumacher late on.[1]

Hill would start the weekend as he meant to go on, sweeping to pole position in qualifying by almost a full second.[1] Local hero Rubens Barrichello was his closest challenger for Jordan-Peugeot, while Jacques Villeneuve, star of the Australian Grand Prix, claimed third ahead of Schumacher.[1]

It rained heavily on race morning, resulting in the entire field start on wet tyres, something which would play beautifully into Hill's hands.[1] The Brit would slither away from the grid expertly to claim an early lead, while teammate Villeneuve, as well as a fast starting Alesi, got the jump on Barrichello.[1]

Ultimately, it was Villeneuve's intervention that proved critical to Hill's bid for victory, for the Canadian simply could not match the Brit's pace.[1] Indeed, the Canadian was driving in what was only his second ever wet race, and would lose almost three seconds a lap in the early laps to Hill before he got used to the conditions.[1]

Behind, Barrichello threw everything he could at Alesi in a bid to regain third, and duly got ahead at the third attempt, only to slide wide and gift the position back to the Frenchman.[1] With that, Alesi would ease clear and wind the pressure on Villeneuve for second, although the Canadian was able to resist as the track began to dry.[1]

Indeed, come half distance there was a distinct dry line, which played a crucial role in the Villeneuve-Alesi fight for second.[1] Indeed, Villeneuve's lack of experience in the wet was shown when he tried to lap the Forti-Ford Cosworth of Luca Badoer, going off-line and hence allowed Alesi, who had stuck to the dry-line, to sweep past through turn three.[1]

Villenueve tried in vain to keep alongside the Frenchman, and hence spent himself spinning out of the race and into the gravel.[1] Alesi, meanwhile, would almost throw away his hard won second place by running onto the grass, allowing Barrichello to dive past before he stopped for new wets a few laps later.[1]

That, ultimately, proved to be the wrong call by the Jordan team, for the circuit was only getting drier and quicker as the race wore on.[1] Out front, Hill would briefly lose the lead when he stopped for slicks, one of the first to do so, with Alesi rejoining from his stop a couple of laps later in a comfortable second.[1]

Barrichello, meanwhile, would slump to fourth once he made his switch to slicks, harassing the back of Schumacher who had not enjoyed his Ferrari's handling in the wet.[1] Once again, Barrichello threw everything he could at the car ahead to try and get past, only to throw it all away with a spin into the wall at the final corner.[1]

Schumacher was hence left in a lonely third place, just in time to be lapped by rival Hill, who was setting lap record after lap record as the circuit continued to improve.[1] The only man close to the Brit's pace proved to be Alesi, although the Frenchman would lose a couple of tenths a second a lap to the #5 Williams-Renault.[1]

With that the race was over, with Hill easing his pace having lapped Schumacher to cruise across the line and claim victory, with Alesi a quarter of a minute back in second.[1] Schumacher completed the podium still a lap down, while Mika Häkkinen secured fourth after a race long defence from compatriot Mika Salo.[1]

The full entry list for the 1996 Brazilian Grand Prix is outlined below:

The full qualifying results for the 1996 Brazilian Grand Prix are outlined below:

The full results for the 1996 Brazilian Grand Prix are outlined below:

Retrieved from "https://f1.fandom.com/wiki/1996_Brazilian_Grand_Prix?oldid=84533"
Community content is available under CC-BY-SA unless otherwise noted.