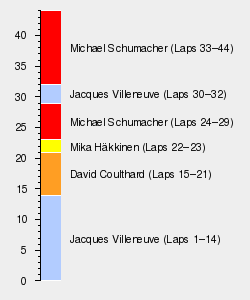 The LIV Grand Prix de Belgique, otherwise known as the 1996 Belgian Grand Prix, was the thirteenth round of the 1996 FIA Formula One World Championship, staged at the Circuit de Spa-Francorchamps near Spa, Belgium, on the 25 August 1996.[1] The race would see Michael Schumacher secure victory, as newly crowned Champions Williams-Renault made a mess of both their drivers' races.[1]

Schumacher's hopes of victory had looked fairly bleak before the race, with a heavy crash on Friday seeing him destroy his preferred race car.[1] He would, however, bounce back to claim third on the grid during qualifying, as Jacques Villeneuve beat Damon Hill to pole position in the familiar Williams duel for pole in a rain affected session.[1]

The start would see Hill continue his run of poor starts, allowing Schumacher to charge into second and Villeneuve run unopposed into La Source to secure the lead.[1] David Coulthard would threaten the Champion elect into the hairpin, before drafting past on the run to Les Combes.[1]

Out front, meanwhile, the familiar sight of a Williams blasting clear in the early stages simply did not happen, with Schumacher able to keep pace with the Canadian racer.[1] Indeed, by lap eight it seemed as if Schumacher was winning the psychological battle if not the physical one, with a huge lock-up for Villeneuve into the Bus Stop damaging the Canadian tyres.[1]

From that moment on Villeneuve picked up a worsening vibration, with his flat-spotted tyres also increasingly prone to locking up on the brakes.[1] Indeed, the Canadian was fast running out of options, with Schumacher remaining glued to his tail as the first stops approached.[1]

Villeneuve's chance looked to have come on lap twelve, for a heavy accident for Jos Verstappen resulted in the safety car being called.[1] Williams immediately radioed Villeneuve to drag him into the pits, although a poor signal saw Villeneuve miss the message and charge past the pitlane.[1]

Williams then hastily called Hill in, although with the pit-equipment setup to receive Villeneuve the Brit was quickly told to stay out.[1] Unfortunately Hill was making his way through the pit-entry as that message was relayed, meaning he slipped behind Mika Häkkinen and Gerhard Berger as he weaved back onto the circuit.[1]

Schumacher, meanwhile, had been planning to stop on lap twelve anyway, and so the safety car had worked beautifully for his strategy.[1] Jean Alesi and Mika Salo also managed to get in on the first of four safety car laps, with Villeneuve and Hill slipping to fifth and thirteenth respectively in the confusion.[1]

The two non-stopping McLaren-Mercedes had shuffled to the head of the pack when the race resumed, with Schumacher unable to get past either driver as Villeneuve dealt with Alesi.[1] Hill, meanwhile, would pick-up a handful of places on the first green flag lap, before the field began to stretch out.[1]

The second round of stops saw Villeneuve complete an extra lap compared to Schumacher, although a mistake on his in-lap ensured that the Ferrari remained ahead.[1] Alesi, meanwhile, would slip behind Häkkinen int he swap, while Hill used his second set of tyres to battle his way up into the top six, fighting with Coulthard and Berger before the Scot spun off.[1]

Once Hill vaulted past a spinning Berger the race was effectively over, with Schumacher able to keep Villeneuve at arm's length to secure his second win for Ferrari.[1] The Canadian racer was an unhappy second ahead of Häkkinen, while Hill ran out of time to catch Alesi and so had to settle for fifth.[1]

Victory for Jacques Villeneuve ensured that the battle for Championship was still an active one with four rounds to go, the Canadian racer leaving Hungary seventeen behind his teammate. Indeed, Damon Hill would all but win the Championship in Belgium if he won with Villeneuve failing to score, with the Canadian now officially the only man who could deny him a maiden title. Behind Jean Alesi had inched away from Michael Schumacher in third, while Mika Häkkinen moved into the top five.

The fight for the Constructors Championship, meanwhile, was officially over, with Williams-Renault leaving Budapest with a 90 point lead over Benetton-Renault. With only 64 points left to fight for it was therefore impossible for the Italian registered team to get back on terms, meaning Williams had their fourth title in five seasons. Benetton were therefore in a fight to finish second, having inched further away from Ferrari and McLaren-Mercedes.

The full entry list for the 1996 Belgian Grand Prix is outlined below:

The full qualifying results for the 1996 Belgian Grand Prix are outlined below:

The full results for the 1996 Belgian Grand Prix are outlined below:

Damon Hill had seen his Championship lead cut to thirteen points after his pit issues, although teammate Jacques Villeneuve believed he should have taken more out of the Brit's lead. Indeed, Villeneuve was genuinely expecting to challenge for the title in his maiden F1 season, although he knew he would have to take more than four points a race out of Hill's advantage. Behind Michael Schumacher had moved back into third, a point ahead of Jean Alesi, with Mika Häkkinen completing the top five.

In the Constructors Championship Williams-Renault had ended the weekend on 149 points, moving them 94 points clear of second placed Benetton-Renault. Indeed, the now Italian registered team had also lost ground to Ferrari in third, with just seven point separating the two with three rounds to go. McLaren-Mercedes were seven further back in fourth, meaning they were still in the hunt, while Jordan-Peugeot were a distant fifth.