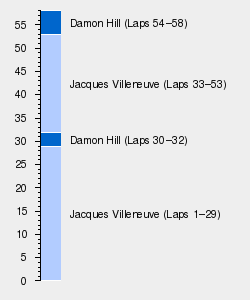 It had been a very busy four months in between the two races, not just because all of the equipment from the previous Grand Prix had to be shipped from Adelaide via road to the pseudo-purpose built Albert Park Circuit.[1] Indeed, it had been a sustained political campaign by local politicians to take the Grand Prix from Adelaide, and had resulted in a lot of investment and protest to create a new F1 venue.[1]

Furthermore, the F1 paddock had was virtually unrecognisable compared to how it had been in late October, with numerous driver changes.[1] The most high-profile of these would be the move of defending Champion Michael Schumacher from Benetton-Renault to Ferrari, with the Scuderia also hiring Eddie Irvine from Jordan-Peugeot to reignite their F1 programme.[1]

There were also new rules regarding qualifying, with just one session to determine the grid order, and a new "107% rule" to prevent slower drivers from getting onto the grid.[1] The result was a shock pole position for the debuting Villeneuve ahead of Hill, while Irvine surprisingly beat Schumacher to third.[1]

Villenueve duly aced his maiden F1 start to claim an early lead, while Irvine managed to squeeze Hill into turn one and open the door for both Ferraris to pass the Brit.[1] However, the race would be brought to a spectacular halt as the field poured into turn three, with a red flag thrown as a result of a huge crash.[1]

The cause would be Alesi, who threw his Benetton across the circuit on the run to turn three, causing the rest of the field to slam on the brakes.[1] Coulthard would brake so hard that his car snapped sideways into the path of Johnny Herbert, with his sudden change of direction catching Brundle out.[1] The #12 Jordan duly went sailing over the top of the Sauber-Ford Cosworth, spiralling into the air before slamming down in the gravel in two separate pieces.[1]

Fortunately Brundle was unhurt, and duly went sprinting from the medical car to find F1 doctor Sid Watkins to get permission to take the restart.[1] He was subsequently granted the chance to take the spare Jordan, and duly joined the rest of the field in lining up on the grid for the full race restart.[1]

This time Hill would get away flawlessly, and hence denied the two Ferraris a chance to challenge into the first corner.[1] Irvine went with them but would quickly forfeit third to Schumacher, with the German just managing to keep in touch with the Williams' before his first stop.[1]

Schumacher would be left half a minute behind the Williams on his two-stop strategy, although that would become academic when a brake issue left him on the sidelines.[1] Irvine hence inherited third place in his now battered Ferrari, having received a whack from Alesi after the Frenchman mistimed a lunge.[1]

Out front, meanwhile, it seemed as if Villeneuve would become one of only a handful of drivers to claim victory on their debut, until an oil leak caused his pace to collapse late on.[1] Hill duly swept past to secure the win ahead of the Canadian, while Irvine was a lonely third to complete the podium.[1]

Notably, Hill's fourteenth career victory would leave him level on the all-time winner's list with his father Graham Hill.[1]

The full entry list for the 1996 Australian Grand Prix is outlined below:

The full qualifying results for the 1996 Australian Grand Prix are outlined below:

The full results for the 1996 Australian Grand Prix are outlined below: