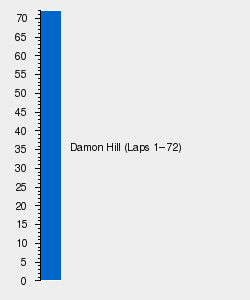 The XIX Gran Premio Marlboro de la Republica Argentina, otherwise known as the 1996 Argentine Grand Prix, was the third round of the 1996 FIA Formula One World Championship, staged at the Autódromo Juan y Oscar Gálvez in Buenos Aires, Argentina, on the 7 April 1996.[1] The race would see Damon Hill secure his third straight victory of the campaign, surviving a mid-race safety car caused by two incidents involving Pedro Diniz.[1]

The build-up to the weekend would be dominated by complaints about the track surface, which was found to be extremely bumpy.[1] As a result the organisers opted to simply grind away the worst limps, only to create a washboard like surface that proved even more troublesome for the drivers during practice.[1]

Regardless, it was Hill who swept to pole position during qualifying, threading his way around the bumps the quickest to beat Michael Schumacher by two tenths.[1] Hill's Williams-Renault teammate Jacques Villeneuve was next ahead of Jean Alesi, with two seconds covering the top half of the field.[1]

Raceday dawned bright and warm, with Hill acing the start to claim an early lead, with Schumacher stalking him in second.[1] Villeneuve gave chase in third ahead of the Benetton-Renaults, with the rest of the field getting away largely in grid order.[1]

Hill and Schumacher would ease clear during the early stages, with the Ferrari unable to seriously threaten the Williams.[1] Indeed, once the pair were clear of the rest Hill began pushing on, and duly opened out a six second lead in the space of four laps.[1]

The leaders all made their stops in the same four lap window, with Hill rejoining with a four second lead over Schumacher, with Gerhard Berger, having jumped Villeneuve and Alesi at the stops.[1] However, before Schumacher could attack or Hill pull away the race would be interrupted by a rare appearance for the safety car.[1]

The cause would be Diniz, who managed to collide with Luca Badoer and send the Italian spiralling into the air.[1] Badoer's car was left upside down at the side of the track, the Italian having to pull himself out of the wreckage, while Diniz carried on, only for his car to catch fire after a safety valve in the fuel tank failed.[1]

At the restart Hill would get the jump on Schumacher and re-establish a small lead, while Martin Brundle and Tarso Marques collided.[1] Debris from that incident was then flicked up by Hill on the following lap, which duly smashed into the rear wing of Schumacher's car.[1]

Although the German seemed to have got away with it the Ferrari's rear wing would slowly begin to fall apart, ultimately causing him to retire twelve laps after the impact.[1] That promoted Berger into second ahead of Villeneuve, only for a suspension failure to end his hopes.[1]

With that the race was over, barring a ferocious duel for fifth between Eddie Irvine and Jos Verstappen on the final lap.[1] That duly ended with the #2 Ferrari ahead of the #17 Footwork-Hart, with those two trailing Rubens Barrichello in fourth by ten seconds.[1]

Out front, meanwhile, Hill would cruise across the line with a twelve second lead over Villeneuve, scoring his third win of the season.[1] Alesi, meanwhile, would claim third having run out of time to catch the Canadian late on, with ten drivers making it to the finish.[1]

The full entry list for the 1996 Argentine Grand Prix is outlined below:

The full qualifying results for the 1996 Argentine Grand Prix are outlined below:

The full results for the 1996 Argentine Grand Prix are outlined below: