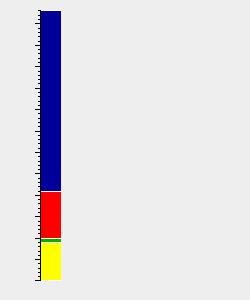 The 15° Gran Premio di San Marino, otherwise known as the 1995 San Marino Grand Prix, was the third round of the 1995 FIA Formula One World Championship, staged on the 30 April 1995 at the Autodromo Enzo e Dino Ferrari in Imola, Italy.[1] The race, which was the first to be held at Imola since the tragic events of the 1994 San Marino Grand Prix, would see Damon Hill claim victory for Williams-Renault, overcoming a race long challenge from the two Ferraris on home soil.[1]

The Imola circuit had undergone a dramatic transformation after the deaths of Ayrton Senna and Roland Ratzenberger the season before, with major re-profiling of several corners.[1] Indeed, the old Tamburello corner was no more, instead replaced by a long chicane, with another chicane installed on the run to Tosa to slow the cars even further.[1]

Qualifying would see Gerhard Berger send the home fans into orbit, despite being beaten to pole position by 0.008s.[1] Indeed, it was defending Champion Michael Schumacher who grabbed top spot on the grid ahead of the Austrian's Ferrari, while Hill was beaten to third by his teammate David Coulthard.[1]

The start would prove that the correct choice was the wet tyre, with the top five slithering clear, while Barrichello streaked through the first corner to claim sixth.[1] Indeed, Schumacher would lead the charge ahead of Berger, with Hill getting the jump on Coulthard to leave the Scot to fend off the attentions of Jean Alesi.[1]

The top six would gain over five seconds a lap on the slick shod drivers, before all sweeping into the pits to swap to slicks themselves, having built a huge lead over the rest.[1] Schumacher was the first in and first out, although the German's race was about to come to a spectacular end.[1]

Having left the pits on slicks Schumacher's Benetton-Renault would suddenly snap sideways around the back of the circuit, sending the car into the barriers.[1] He duly climbed out of the shattered Benetton and claimed it was a failure rather than a highly likely driver error, with Benetton boss Flavio Briatore marching away from the garage within moments of the German's accident.[1]

With Schumacher out the fight for victory passed to Berger and Hill, who engaged in an excellent squabble for the lead.[1] That was, however, until Berger suffered a poor second pitstop and slipped back behind teammate Alesi, leaving Hill on his own at the head of the field.[1]

Indeed, Alesi had only just won his battle with Coulthard, the pair having brushed against one-another prior to their first stops.[1] Coulthard subsequently picked up front wing damage and had to pit again, although the Scot's race would be ruined when he managed to speed in the pitlane and was hence slapped with a ten second stop-go.[1]

With that the race was over, with Hill cruising across the line to claim victory ahead of Alesi and Berger, a result which partially pleased the tifosi.[1] Behind, Coulthard would run out of time to catch the Ferraris and so settled for fourth, while Mika Häkkinen and Heinz-Harald Frentzen completing the points.[1]

Michael Schumacher would assume the lead of the Championship on the 13 April after the FIA Court of Appeal ruling regarding the 1995 Brazilian Grand Prix, leaving him on 14 points after two races. Damon Hill, meanwhile, had used victory in Argentina to leap into second, four behind the man who had beaten him to the crown in 1994. Jean Alesi was a further two points back in third, with nine drivers on the score sheet.

In contrast the FIA ruling on the 13 April would have little effect on the Constructors Championship, leaving Ferrari at the head of the hunt on 13 points. Best of the rest were Williams-Renault on ten points, while Benetton-Ford Cosworth sat in third (but would have been leading had the ruling been marginally different). McLaren-Mercedes and Sauber-Ford Cosworth were the only other scorers after the opening two rounds.

The full entry list for the 1995 San Marino Grand Prix is outlined below:

The full qualifying results for the 1995 San Marino Grand Prix are outlined below:

The full results for the 1995 San Marino Grand Prix are outlined below:

A second victory in two races had catapulted Damon Hill to the top of the Championship with three races gone, the Brit leaving San Marino six clear at the head of the field. Michael Schumacher made way for the Brit and slipped to second, level on points with Jean Alesi. David Coulthard was next, level on points with Gerhard Berger, with nine drivers on the board after three rounds.

In the Constructors Championship, meanwhile, it was Williams-Renault who left San Marino at the head of the field, despite being level on points with former leaders Ferrari. The British squad were deemed ahead courtesy of having scored two wins, with the Scuderia yet to win in 1995. Benetton-Renault, meanwhile, were a distant third, sixteen off the leaders, with McLaren-Mercedes and Sauber-Ford Cosworth the only other scorers.