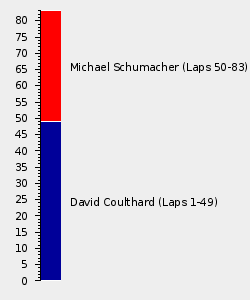 The 1995 Pacific Grand Prix, otherwise officially known as the II Pacific Grand Prix, was the fifteenth round of the 1995 FIA Formula One World Championship, staged at the TI Circuit in Aida, Okayama Prefecture, Japan, on the 22 October 1995.[1] The race would see Michael Schumacher secure his second World Championship title with his eighth victory of the season, having masterfully grabbed the lead from David Coulthard despite having an inferior pit-strategy.[1]

The weekend was heralded by five driver changes, with Ukyo Katayama returning after injury, while Bertrand Gachot and Gianni Morbidelli were restored to seats they had lost to (better funded) pay drivers.[1] Elsewhere, Aguri Suzuki returned to claim the second Ligier-Mugen-Honda seat for the first of two home races, while Danish racer Jan Magnussen was handed his F1 debut with McLaren-Mercedes, replacing Mika Häkkinen who was out with appendicitis.[1]

Qualifying would see David Coulthard once again secure pole position, ahead of teammate Damon Hill by two tenths of a second.[1] Champion-elect Schumacher would start from third ahead of Jean Alesi, while Gerhard Berger would share the third row with Eddie Irvine.[1]

The start saw Coulthard sprint into an early lead, while Hill made a poor getaway, and hence opted to run Schumacher out of road as they turned into turn one.[1] The ploy partially worked as Schumacher bounced across the grass back to fifth, although Hill himself would slip behind Alesi, who had suddenly found the track empty in front of him.[1]

Coulthard duly established a small lead at the head of the field, while Schumacher would lose a lot of time before passing Berger for fourth on lap five.[1] He duly caught onto the back of Hill within a few laps, but his first attempted lunge at the hairpin on lap eleven was aggressively swatted aside by the Englishman.[1]

In truth Hill was behind held up by Alesi, as shown by the pace of Coulthard who had built a fourteen second lead by the end of lap eighteen.[1] It was at this point that Alesi, Hill and Schumacher, all on three stop strategies, swept into the pits for the first stops, with Schumacher jumping both of his immediate rivals.[1]

Now released, Schumacher began hunting down Coulthard, whose strategy was retroactively changed to a two stop after issues for Hill's stop.[1] That, combined with a series of strong laps from Schumacher, left the Scot in an increasingly vulnerable position, and a series of mesmerising laps from the German ace would ultimately settle the race.[1]

Indeed, the decisive part of the race came when Schumacher made his third and final stop, with the German ace's in-lap some two seconds faster than anyone had managed to that point.[1] He duly sprinted out of the pits without losing the lead, having been almost certain to slip behind Coulthard at the start of his in-lap, leaving him in prime position to win the race.[1]

And so it proved, with Schumacher cruising home to claim victory, and the Championship, by a quarter of a minute, while Coulthard was left frustrated at another opportunity lost.[1] Hill, meanwhile, would finish a lonely and equally annoyed third, but would get partial revenge on Schumacher by revealing what the German ace had said to him after the race.[1] Indeed, while Schumacher appeared courteous and magnanimous to the press, Hill's comments demonstrated the German's less-than-sporting nature.[1]

Regardless, Schumacher was World Champion for the second time, becoming the youngest driver to claim multiple titles.[1]

The full entry list for the 1995 Pacific Grand Prix is outlined below:

The full practice results for the 1995 Pacific Grand Prix are outlined below:

The full qualifying results for the 1995 Pacific Grand Prix are outlined below:

The full results for the 1995 Pacific Grand Prix are outlined below:

Retrieved from "https://f1.fandom.com/wiki/1995_Pacific_Grand_Prix?oldid=84883"
Community content is available under CC-BY-SA unless otherwise noted.