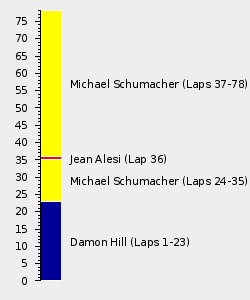 The 1995 Monaco Grand Prix, otherwise officially known as the 53e Grand Prix de Monaco, was the fifth round of the 1995 FIA Formula One World Championship, staged on the 28 May 1995 at the Circuit de Monaco in Monte Carlo, Monaco.[1] The race would see Michael Schumacher sweep to his third victory of the season, having been unchallenged throughout the race as his rivals lost time due to strategy and mishap.[1]

Qualifying would see Ferrari throw away a rare chance to grab pole position, opting to swap their drivers' cars overnight after Jean Alesi had been quickest on Friday.[1] That allowed Damon Hill to sweep to pole ahead of Schumacher, while David Coulthard grabbed third ahead of the two scarlet Ferraris.[1]

The start of the Monaco Grand Prix was, as ever, chaotic, with a large accident at Sainte Devote ultimately causing a red flag.[1] The cause would be the two Ferraris, who tried to charge either-side of Coulthard into the first corner, only to find that the circuit was far too narrow to go three abreast.[1] They came to a rest across the circuit, completely blocking the track.[1]

Their wreckage was swept away and the grid reset, with Coulthard, Berger and Alesi all driving their spare cars.[1] This time, however, the trio were more apprehensive running into the first corner, Coulthard immediately finding he had a throttle issue as, up ahead, Hill got the jump on Schumacher to claim an early lead.[1]

Those two quickly charged away at the head of the field, with Coulthard becoming a rolling roadblock due to his throttle issues.[1] Elsewhere six drivers were slapped with ten second stop-go penalties for jumping the restart, resulting in large gaps appearing in the field early on.[1]

It was at this point that the race became a strategic battle, with Hill opting to serve the first of his two pitstops early on, while Schumacher and Benetton gambled on one.[1] Hill duly got caught up in traffic and so lost a lot of time, while a perfect stop for Schumacher saw him emerge with a handsome lead over the Brit.[1]

At that point Schumacher's largest threats should have been Coulthard, Alesi and Mika Häkkinen, who were all on the same strategy as the German ace.[1] However, Coulthard's lack of pace in the early stages ultimately ensured that all three were too far back to challenge, with Coulthard and Häkkinen retiring.[1]

Indeed, Alesi would entertain thoughts of challenging for the lead once Coulthard dropped away, although his charge was ended by a collision with Martin Brundle, the Brit having spun his Ligier-Mugen-Honda right in front of the Frenchman.[1] Hill, meanwhile, would slowly chip away at Schumacher's lead in the closing stages, but was too far back to challenge.[1]

With that the race was run, with Schumacher cruising across the line fifteen seconds clear of Hill to extend his Championship lead.[1] Berger, meanwhile, would have a relatively quiet run to third as the last man on the lead lap, with Johnny Herbert, Mark Blundell and Heinz-Harald Frentzen claiming the remaining points.[1]

Victory for Michael Schumacher, combined with Damon Hill's last lap tumble ensured that he moved back to the top of the Championship, leaving Spain with 24 points to his name. Hill, meanwhile, would slip a point behind in second, with a nine point gap back to third placed Jean Alesi. Elsewhere, Gerhard Berger had moved up to fourth at the expense of David Coulthard, with the Scot himself slipping to sixth behind Johnny Herbert.

In the Constructors Championship it had been a very good afternoon for Benetton-Renault, with their one-two finish leaving them with 23 points. Indeed, while they had remained in third, it did ensure that they were just four points behind Championship leaders Ferrari, who had moved a point ahead of Williams-Renault to reclaim the lead. Elsewhere, McLaren-Mercedes looked to already be out of the fight in a distant fourth, while Jordan-Peugeot and Ligier-Mugen-Honda had added their names to the score sheet.

The full entry list for the 1995 Monaco Grand Prix is outlined below:

The full practice results for the 1995 Monaco Grand Prix are outlined below:

The full qualifying results for the 1995 Monaco Grand Prix are outlined below:

The full results for the 1995 Monaco Grand Prix are outlined below:

Michael Schumacher moved five points clear atop the Championship table with his third victory of the campaign, having scored 34 points in total. Damon Hill remained his closest challenger, with those two looking set to duel for the title for a second consecutive season, with twelve points between the Brit in second, and Gerhard Berger in third. The Austrian himself was instead looking at a fight for third with teammate Jean Alesi, while Johnny Herbert completed the top five.

In the Constructors Championship, meanwhile, there had been a swap of positions between Benetton-Renault and Ferrari, with the former leaping to the head of the hunt. Indeed, the British squad left Monte Carlo on 36 points, four ahead of second placed Williams-Renault, who remained in second after Hill's podium. Ferrari therefore slipped to third, five off the lead, with those three the only teams in double figures after the opening five races.

Retrieved from "https://f1.fandom.com/wiki/1995_Monaco_Grand_Prix?oldid=84640"
Community content is available under CC-BY-SA unless otherwise noted.