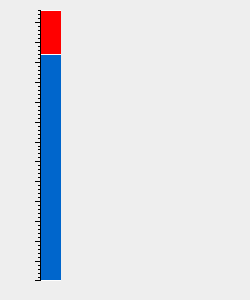 The XXXIII Grand Prix Molson du Canada, otherwise known as the 1995 Canadian Grand Prix, was the sixth round of the 1995 FIA Formula One World Championship, staged at the Circuit Gilles Villeneuve in Montreal, Canada, on the 11 June 1995.[1] The race would see Jean Alesi claim a popular maiden victory for Ferrari on his 31st birthday, prompting a track invasion as he crossed the line.[1]

The weekend had started in fairly familiar fashion, with Michael Schumacher sweeping to another dominant pole position for Benetton-Renault during qualifying.[1] Damon Hill was next ahead of Williams-Renault teammate David Coulthard, while Alesi would start from fifth behind his teammate Gerhard Berger.[1]

The start of the race proved undramatic, with Schumacher sprinting clear of the rest of the field to leave Hill and Coulthard to fight for second.[1] Behind, Alesi and Berger would get the jump on Herbert, leaving the Brit vulnerable to attack from Mika Häkkinen, although the Finn's lunge at the hairpin would ultimately result in both retiring.[1]

Coulthard was another early retirement, spinning himself out at the hairpin on lap two, leaving Hill in a lonely second.[1] However, all was not well with the Brit's Williams-Renault, and he would eventually slip behind both Ferraris before retiring completely with a gearbox failure.[1]

That left Schumacher with a healthy lead, which only grew during the pitstop phase as Ferrari messed up their strategies.[1] Indeed, while Alesi only received a minor delay, Berger's race was ruined when he stayed out too long an ran out of fuel, resulting in him coasting back to the pits and dropping out of contention.[1]

The Austrian's race would come to an ignominious end in the closing stages, a poorly timed lunge on Martin Brundle leaving both cars with terminal damage.[1] Out front, meanwhile, Schumacher was cruising to a dominant victory half a minute clear of Alesi, only for his car to suddenly jam in third gear with eleven laps to go.[1]

Schumacher was in the pits on the same lap, with a quick diagnosis revealing the fault was with the steering wheel gear-change paddles, not the gearbox.[1] A quick swap and the German was back in the fray, albeit down in fifth behind Olivier Panis.[1]

That left Alesi half a minute clear of the two Jordan-Peugeots at the head of the field, with the Frenchman duly cruising across the line to a huge amount of good will.[1] Indeed, the Canadian fans would burst into the circuit in celebration of the Frenchman's achievements, largely due to the fact that Alesi was driving the #27 Ferrari, a car wielded by Canadian hero Gilles Villeneuve.[1]

The flood of people onto the circuit would, however, cause chaos, with several near misses as the field came to complete the race.[1] Indeed, Schumacher was on the back of Panis as they came across a flock of people on the start/finish straight, forcing him to back off and finish behind the Ligier-Mugen-Honda.[1]

Ultimately the organisers would decide to strike a lap off the timesheets, although it had no affect on the order at the head of the field.[1] Alesi was still the winner ahead of Rubens Barrichello and Eddie Irvine, while Panis finished half a second clear of Schumacher in fourth.[1] Gianni Morbidelli was next to complete the points, while Mika Salo was put back ahead of Luca Badoer as a result of the late revision.[1]

Michael Schumacher moved five points clear atop the Championship table with his third victory of the campaign, having scored 34 points in total. Damon Hill remained his closest challenger, with those two looking set to duel for the title for a second consecutive season, with twelve points between the Brit in second, and Gerhard Berger in third. The Austrian himself was instead looking at a fight for third with teammate Jean Alesi, while Johnny Herbert completed the top five.

In the Constructors Championship, meanwhile, there had been a swap of positions between Benetton-Renault and Ferrari, with the former leaping to the head of the hunt. Indeed, the British squad left Monte Carlo on 36 points, four ahead of second placed Williams-Renault, who remained in second after Hill's podium. Ferrari therefore slipped to third, five off the lead, with those three the only teams in double figures after the opening five races.

The full entry list for the 1995 Canadian Grand Prix is outlined below:

The full qualifying results for the 1995 Canadian Grand Prix are outlined below:

The full results for the 1995 Canadian Grand Prix are outlined below:

In-spite of his late race failure, Michael Schumacher would leave the Canadian Grand Prix with his lead having been enhanced to seven points, having claimed 36 points across the opening six races. Damon Hill remained his closest challenger, although race winner Jean Alesi had made ground, moving onto 24 points for the season. Gerhard Berger was next ahead of Johnny Herbert, with thirteen drivers on the board.

In the Constructors Championship there had been another shuffle at the top of the field, with Ferrari taking a turn at the top of the table on 41 points. They hence bumped Benetton-Renault down to second, who dropped three behind the Scuderia, while Williams-Renault slipped to third, nine off the lead. A twenty point gap then followed to Jordan-Peugeot, fresh from their strongest weekend, with McLaren-Mercedes completing the top five.