Formula 1 Wiki
Register
Don't have an account?
Sign In
Advertisement
in: 1995 Grands Prix, British Grand Prix, Formula One races in the United Kingdom 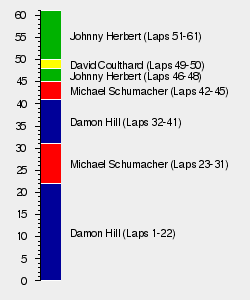 The 1995 British Grand Prix, otherwise known as the XLVIII RAC British Grand Prix, was the eighth round of the 1995 FIA Formula One World Championship, staged at the Silverstone Circuit in Northamptonshire, UK, on the 16 July 1995.[1] The race would see Johnny Herbert claim a maiden victory on home soil driving for Benetton-Renault, after major protagonists Damon Hill and Michael Schumacher collided.[1]

The weekend would begin with Footwork in major financial trouble, resulting in Gianni Morbidelli being dropped in favour of pay-driver Max Papis.[1] Otherwise the field appeared as it had done in France, with rumours of the Schumacher to Ferrari move growing louder and louder.[1]

Qualifying would see a familiar duel for pole position between Hill and Schumacher, with the Brit ultimately coming out on top.[1] They were trailed by Hill's teammate David Coulthard, while Herbert would claim fifth behind Gerhard Berger.[1]

The start of the race would see Hill sprint into an early lead, although it was Jean Alesi who stole the show, leaping from sixth to second.[1] Indeed, the Frenchman's intervention would prove invaluable to Hill, who was able to establish a fair lead on the opening lap as Alesi battled with Schumacher.[1]

The Alesi intervention would last through to lap nineteen, before pitstops saw the #27 Ferrari tumble down the order.[1] The majority of the field would opt for a two stop strategy, although Schumacher in second once Alesi pitted, gambled on a one-stop.[1]

As a result of their split strategies Hill would lose the lead to Schumacher after his second stop, although it was clear that the Brit had far more pace than the Benetton.[1] Indeed, it was not long before the #5 Williams-Renault swept onto the back of the similarly engined #1 Benetton, with Hill launching a bid for the lead on lap 46.[1]

That, ultimately, proved to be a mistake, with Schumacher steering into the side of the Williams having been unable to see the lunge, resulting in the pair making heavy contact.[1] The result was two damaged cars beached in the gravel at Priory, with both drivers refusing to take the blame, while Herbert assumed the lead ahead of Coulthard.[1]

Coulthard would, however, have to catch onto the back of the Benetton before he could challenge for the lead, having got caught behind Alesi for a second time after his first stop.[1] An excellent string of laps would see Coulthard catch and ultimately pass his compatriot, only for all his hard work to be undone by a ten second stop-go penalty, issued for speeding in the pitlane.[1]

The Scot duly slipped back to third behind Alesi having served his penalty, leaving Herbert with a handsome lead at the head of the field.[1] Further back there would be one last incident to decide the final order, with Rubens Barrichello and Mark Blundell colliding on the final lap, resulting in Blundell limping across the line on three wheels.[1]

Out front, meanwhile, Herbert would cruise home to claim his maiden F1 victory, fifteen seconds clear of Alesi in second.[1] Coulthard duly completed the podium in a frustrated third, while Olivier Panis screamed past Blundell's three wheeled McLaren-Mercedes on the final lap to grab fourth ahead of the Brit.[1] Heinz-Harald Frentzen claimed the remaining point in sixth.[1]

Victory for Michael Schumacher ensured that he left France with a controlling stake in the Championship hunt, with 46 points to his credit after seven races. That translated to an eleven point lead over Damon Hill, meaning Schumacher could afford to miss a race and still lead the Championship. Behind, Jean Alesi had lost more ground in third ahead of teammate Gerhard Berger, while David Coulthard had moved ahead of Johnny Herbert.

In the Constructors Championship it was Benetton-Renault's turn to lead the Championship, moving five points clear on 48 points. Ferrari had hence had to make way for them and dropped to second, and were just a point ahead of Williams-Renault in third. Elsewhere, Jordan-Peugeot kept their tally rolling with another points finish, enhancing their hold on fourth, with McLaren-Mercedes completing the top five.

The full entry list for the 1995 British Grand Prix is outlined below:

The full qualifying results for the 1995 British Grand Prix are outlined below:

The full results for the 1995 British Grand Prix are outlined below:

It was status quo at the head of the Championship, with neither of the major protagonists managing to score after their collision. As such, Michael Schumacher had retained his eleven point lead over Damon Hill, with the Brit also coming under pressure from Jean Alesi, who left Silverstone just three points off the Brit. Elsewhere, Johnny Herbert had leapt up to fourth ahead of David Coulthard, with fourteen drivers on the board.

Benetton-Renault had been the big winners of the weekend, extending their lead in the Constructors Championship to eleven points. Ferrari were still their closest challengers, having eeked out a three point advantage over Williams-Renault in third. Jordan-Peugeot, meanwhile, remained in fourth ahead of Ligier-Mugen-Honda, the latter having moved ahead of McLaren-Mercedes on count-back.