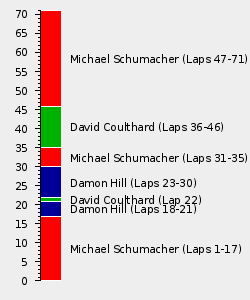 The 1995 Brazilian Grand Prix, otherwise known as the XXIV Grande Prêmio do Brasil, was the opening round of the 1995 FIA Formula One World Championship, staged at the Autódromo José Carlos Pace in São Paulo, Brazil, on the 26 March 1995.[1] The race would see Michael Schumacher claim victory ahead of David Coulthard, albeit after both were reinstated by an FIA Court of Appeal tribunal having both been disqualified for using illegal fuel.[1]

The winter of 1994 had seen a major shift in regulations, resulting in less aerodynamically efficient cars.[1] This resulted in a lot more lateral movement, with cars sliding a lot more than the had done in 1994, with more enforcement on the banning of driver aids further enhancing the difficulty of driving.[1]

Elsewhere, Benetton had secured an engine deal with Renault, taken from Ligier, and were given parity with defending Constructors Champions Williams.[1] Benetton would also retain their driver line-up of defending Champion Michael Schumacher and Johnny Herbert, while Williams opted to place David Coulthard alongside Damon Hill.[1]

That decision left Nigel Mansell without a seat, resulting in the 1992 World Champion moving to McLaren, only to find he could not fit in their 1995 car.[1] He was hence replaced by Mark Blundell at the season opener.[1] Elsewhere, former Champions Lotus had merged with Pacific, with the latter listed as the official chassis constructor to end Lotus' 36 year involvement in F1.[1]

Qualifying would be dominated by Renault engined cars, with Hill edging out Schumacher to claim pole position.[1] Their teammates Coulthard and Herbert shared the second row, with Gerhard Berger and Jean Alesi sharing the third row for Ferrari.[1]

The start of the race would see Schumacher get the best start, sprinting clear of Hill to claim an early lead.[1] Those two quickly pulled away from their squabbling teammates, with the rest of the field making it through the first corner without issue.[1]

The race quickly settled into a procession, with Hill biding his time to make a move, knowing that the pair were on different strategies.[1] Indeed, Schumacher would make an early stop, Benetton opting for a three stop strategy, gifting the lead to Hill who was on a two stop.[1]

Unfortunately their strategic battle would not play out, for Hill would retire shortly after his first stop with a suspension failure.[1] Schumacher was hence left with a small lead over Coulthard, although the Scot would fall away from the German ace in closing stages due to the #1 Benetton's fresher tyres.[1]

They duly finished first and second on the track, only to both be thrown out of the race after post-race scrutineering, which found both cars to be using illegal fuel.[1] The handed Berger the win for Ferrari ahead of Mika Häkkinen and Alesi, although both Benetton and Williams protested the result.[1]

An FIA Court of Appeal hearing held on the 13 April would ultimately reinstate the duo, declaring that it was the teams fault that their Elf fuel was illegal, not the drivers.[1] Schumacher and Coulthard hence claimed their points as well as trophies, while Benetton and Williams were not awarded constructors points as punishment instead.[1]

The full entry list for the 1995 Brazilian Grand Prix is outlined below:

The full qualifying results for the 1995 Brazilian Grand Prix are outlined below:

The full results for the 1995 Brazilian Grand Prix are outlined below:

Victory, albeit one that was retroactively re-awarded, would see Michael Schumacher claim an early Championship lead after the opening round, four points ahead of David Coulthard in second. Gerhard Berger was next ahead of Mika Häkkinen, while Jean Alesi and Mark Blundell were the only other scorers at the opening round.

In the Constructors Championship there would be major implications for Williams-Renault and Benetton-Renault for using "illegal" fuel, with both teams forfeiting their points for the opening round. That meant it was Ferrari who led the way after the opening weekend on six points, with McLaren-Mercedes the only other scorers on four.

Retrieved from "https://f1.fandom.com/wiki/1995_Brazilian_Grand_Prix?oldid=84423"
Community content is available under CC-BY-SA unless otherwise noted.