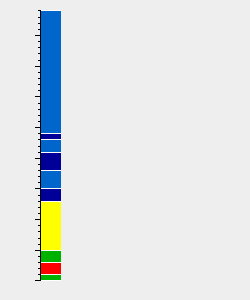 The 1995 Belgian Grand Prix, otherwise known as the LIII Grand Prix de Belgique, was the eleventh round of the 1995 FIA Formula One World Championship, staged at the Circuit de Spa-Francorchamps in Spa, Belgium, on the 27 August 1995.[1] The race would be won in controversial circumstances by Michael Schumacher, with the German ace throwing some very dangerous defensive moves to keep Damon Hill at bay.[1]

Weather would dictate the weekend, and hence resulted in a rather bizarre grid, with Gerhard Berger and Jean Alesi sharing the front row for Ferrari.[1] Mika Häkkinen was next ahead of Johnny Herbert, while title protagonists Hill and Schumacher found themselves down in eighth and sixteenth respectively.[1]

The start of the race saw Herbert make a barnstorming getaway, sprinting into La Source to challenge Alesi for the lead.[1] David Coulthard and Hill also made strong starts and so ran in third and fourth, with track damp but dry enough for slicks after pre-race rain.[1]

Alesi eventually secured the lead of the race, only for a suspension failure to end his race, while Herbert's pace evaporated as the track dried.[1] That left Coulthard at the head of the field ahead of Hill, with the Scot surprisingly able to pull clear of his Williams-Renault teammate, while Schumacher had battled his way up into fifth.[1]

Schumacher picked up two more places to move into third, just in time to see Coulthard's bid for a maiden victory end with a gearbox failure.[1] Hill duly inherited the lead until he stopped for fresh slick tyres, with Schumacher briefly leading until he came in for his own fresh slicks.[1]

However, within a few laps of the German's stop rain would sweep across the circuit, prompting Hill to pit for wets as the safest option.[1] Schumacher, in contrast, was told by the Benetton team to stay out, who believed that the circuit would soon dry out and hence was their only chance at beating Williams.[1]

Initially that gamble appeared to have backfired, for as masterly as Schumacher was able to keep his slick-shod car on the circuit, his pace was significantly slower than Hill's.[1] It was not long before the #1 Benetton had its mirrors full of the #5 Williams, with Schumacher opting to take his defensive driving to a whole new level.[1]

Indeed, Schumacher would do everything in his power to keep Hill's Williams at bay, almost literally pushing Hill off circuit at every opportunity.[1] Hill would go the stewards after the race about the German's actions, with the pair rubbing wheels as Schumacher tried to run Hill off circuit at Blanchimont.[1]

Evenutally Hill would get ahead of Schumacher, the German's resistance finally breaking as the Benetton slithered onto the grass.[1] Unfortunately for Hill his move came just as the track began to dry again, resulting in Schumacher breezing back past the Williams a little over a lap later.[1]

That prompted Hill to stop for slicks, only for the rain to return and cause everyone to stop for wets, the majority pitting under a hastily called safety car.[1] That left Hill right on Schumacher's tail, only for the Brit to get slapped with a ten second stop-go for speeding in the pitlane, and hence dropping to third behind Martin Brundle.[1]

With that the fight for victory was over, with Schumacher easing clear of Brundle to claim victory.[1] Hill, meanwhile, would pull off a daring move on the final lap to relieve Brundle of second, with the Ligier-Mugen-Honda ultimately finishing in third, Brundle's final podium appearance.[1] The remaining points were split between Heinz-Harald Frentzen, Mark Blundell and Rubens Barrichello.[1]

Victory for Damon Hill would alleviate fears that Michael Schumacher was simply going to runaway with the title, the Brit leaving Hungary eleven behind the German ace. Indeed, it seemed as if the pair had very similar pace, and it was only the unreliability and accident factor that was keeping the two apart in the Championship. Jean Alesi, meanwhile, had lost ground in third, while David Coulthard had moved ahead of Johnny Herbert to secure fourth.

Benetton-Renault had seen their lead atop the Constructors Championship severely wounded, leaving Hungary with only six points in hand over the team in second. That team was Williams-Renault, with their first one-two of the season carrying them ahead of Ferrari and onto Benetton's similarly powered tail. Ferrari themselves, meanwhile, would slip eleven points behind Williams, but still had a huge margin over fourth placed Jordan-Peugeot.

The full entry list for the 1995 Belgian Grand Prix is outlined below:

The full qualifying results for the 1995 Belgian Grand Prix are outlined below:

The full results for the 1995 Belgian Grand Prix are outlined below:

Victory for Michael Schumacher ensured that the German ace extended his Championship lead, although he was on the verge of missing a race if he received another reprimand. Regardless, Schumacher left Spa with fifteen points in hand over Damon Hill in second, with the Brit realistically the only man capable of challenging the German. Behind, another pointless weekend for Jean Alesi saw him lose more ground in third, with David Coulthard and Johnny Herbert completing the top five.

In the Constructors Championship Benetton-Renault had gained some breathing room, moving ten clear of Williams-Renault at the head of the hunt. Those two were hence set to fight for the crown amongst themselves, with Ferrari having slipped 27 points behind the leaders after another weekend of poor reliability. Behind, Ligier-Mugen-Honda had moved into fourth ahead of Jordan-Peugeot, while McLaren-Mercedes and Sauber-Ford Cosworth inched closer to the Irish squad.