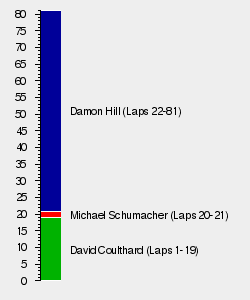 The 1995 Australian Grand Prix, otherwise officially known as the LX EDS Australian Grand Prix, was the seventeenth and final round of the 1995 FIA Formula One World Championship, staged at the Adelaide Street Circuit in Adelaide, South Australia, on the 12 November 1995.[1] The race would see Damon Hill round out the season with a dominant victory, with his two lap margin matching a record set by Jackie Stewart at the 1969 Spanish Grand Prix.[1]

It proved to be a weekend of records, with the official race attendance listed as 210,000, a tally not beaten until the 2000 United States Grand Prix.[1] It would also be the last Grand Prix to be held on the streets of Adelaide, with F1 set to move to the city of Melbourne from 1996 onward.[1]

Into the weekend itself and qualifying was overshadowed by a huge shunt for Mika Häkkinen at Brewery Bend, a crash that left the Finn unable to race with head injuries, which would require a long stay in hospital.[1] Hill, meanwhile, would sweep to pole position ahead of teammate David Coulthard, while World Champion Michael Schumacher lined up in third ahead of the Ferraris.[1]

Coulthard made the best getaway at the start of the race, sprinting ahead of Hill to claim the lead.[1] Schumacher, meanwhile, would see his bid for victory effectively ruined at the start, as he found himself stuck behind Gerhard Berger and Jean Alesi after a poor start.[1]

Schumacehr lost a lot of time and tyre grip fighting the Ferraris, taking five laps to vault past both Berger and Alesi.[1] That ensured that he was too far back to entertain a challenge to the two Williams-Renaults, which had blasted away in the early stages.[1]

Indeed, it was only when Coulthard clouted the wall when heading into the pits that Williams looked vulnerable, the Scot ultimately retiring due to the damage sustained in the impact.[1] Hill therefore inherited the lead, which would blossom to over a full minute during the first pitstop window as Schumacher and Alesi collided after their stops.[1]

Berger was left to pick-up the chase for Hill, although his engine would fail to hand the torch to Heinz-Harald Frentzen.[1] The German racer subsequently suffered a gearbox failure, gifting second to Johnny Herbert, until he suffered driveshaft failure, while Eddie Irvine dropped out with a complete loss of pneumatic pressure.[1]

That left Hill with a lap and a half's advantage of Olivier Panis in second, although the Ligier-Mugen-Honda would lose a lot of pace in the closing stages.[1] Hill duly swept past for a second time en-route to his fourth win of the season, with fastest lap ensuring that he also claimed his second Hattrick of the campaign.[1]

Behind, Panis would limp his Ligier across the line to claim second, with Gianni Morbidelli running out of time to catch the Frenchman.[1] Regardless, Morbidelli would be delighted to secure his maiden podium finish ahead of Mark Blundell, while Mika Salo and Pedro Lamy picked up the remaining points after a late duel for fifth.[1]

That brought an end to the 1995 edition of Formula One, with Bon Jovi headlining an end-of-season concert that had become a tradition during the trips to Adelaide.[1]

Michael Schumacher added to his already all-conquering tally with victory in Japan, leaving Suzuka with 102 points to his name. Damon Hill, meanwhile, had secured second in the Championship for a second successive season, although he would be out to beat Schumacher at the season finale to reverse his recent run of relatively poor form. David Coulthard, meanwhile, would face a fight to hold third at the finale, with Johnny Herbert and Jean Alesi both within striking distance.

A second double-podium of the season for Benetton-Renault ensured that they claimed the Constructors Championship with a race to spare, ending the weekend on 137 points. Williams-Renault would therefore have to settle for second on 102 points, while Ferrari were confirmed in third on 73. The intrigue heading into the finale would therefore be on the fight to complete the top five, with McLaren-Mercedes and Jordan-Peugeot leading that fight ahead of the trip to Australia.

The full entry list for the 1995 Australian Grand Prix is outlined below:

The full qualifying results for the 1995 Australian Grand Prix are outlined below:

The full results for the 1995 Australian Grand Prix are outlined below:

With that the 1995 FIA Formula One World Championship came to its conclusion, with Michael Schumacher proclaimed as Champion on 102 points. Damon Hill would finish as runner-up for the second successive season, ending the season on 69, while David Coulthard claimed third on 49. Johnny Herbert was next with 45 points to his name, while Jean Alesi rounded out the top five on 42.

In the Constructors Championship it was Benetton-Renault who ended the season as the best combination in the field, ending the season on 137 points. Williams-Renault ended the season in second, claiming 112 points across the campaign, while Ferrari were third, having claimed 73 points. Fourth would go to the new McLaren-Mercedes combination, a long way back on 30 points, while Ligier-Mugen-Honda secured fifth with 24.