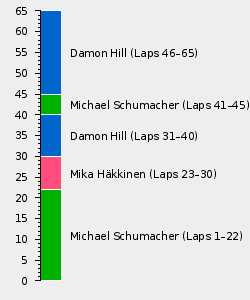 The 1994 Spanish Grand Prix, otherwise known as the XXXVI Gran Premio Marlboro de España, was the fifth round of the 1994 FIA Formula One World Championship, staged at the Circuit de Catalunya near Barcelona, Spain, on the 24 May 1994.[1] The race would be the first to feature new aerodynamic restrictions, introduced after the tragic events of the 1994 San Marino Grand Prix, and would see Damon Hill end Michael Schumacher's four race run of victories.[1]

The new regulations had resulted in a lot of rushed designs and testing, and hence created a fair amount of controversy.[1] Indeed, Pedro Lamy would have a major accident while testing Lotus' updated car when a wing failed, sending him flying over the barriers, and hence would be replaced in Barcelona by Alex Zanardi.[1]

That prompted Benetton boss Flavio Briatore to proclaim that they could not guarantee the safety of their B194s, and hence that the new regulations should be dropped.[1] The FIA duly threw Benetton out of the meeting, and only reinstated them after a meeting of both the team bosses and the race officials, with Briatore backing down.[1]

Regardless, it was Benetton's lead driver Schumacher who emerged from qualifying with pole position, beating Hill in the Williams-Renault.[1] Mika Häkkinen was next for McLaren-Peugeot, while JJ Lehto put the #6 Benetton onto the second row in fourth.[1]

Schumacher would go on to ace his start, easing clear of Hill into the first corner to secure the lead.[1] The Brit himself was untroubled in second, unlike Gerhard Berger who would jump ahead of Rubens Barrichello, only to be spun to the back of the field when the Brazilian misjudged his braking point.[1]

Schumacher quickly established a fair lead over Hill, leaving the Brit to fend off the attentions of Häkkinen.[1] Those two continued to fight until Häkkinen eventually got past, before both suddenly began to catch Schumacher as the pitstops loomed.[1]

Indeed, the German racer was suffering with a gearbox issue, stopping in the pits on lap 23 with his gearbox jammed in fifth.[1] Häkkinen and Hill duly flashed past to claim the lead, but dropped back behind the German when they made their stops.[1]

Häkkinen lost a lot of time during his second stop and so slipped down the order, while Schumacher just managed to prevent his car stalling at his second stop, still stuck in fifth.[1] Hill therefore inherited the lead a few seconds clear of Schumacher, while Häkkinen would have to fend off the attentions of compatriot JJ Lehto until his engine failed.[1]

Lehto's race would end a few laps later with an engine issue of his own, leaving Martin Brundle in third, until his transmission failed.[1] Mark Blundell would therefore end up on the final step of the podium when the chequered flag fluttered, with Hill cruising to victory ahead of Schumacher, who had miraculously managed to claim second despite racing with a jammed gearbox for two thirds of the race.[1]

A fourth dominant victory of the season had left Michael Schumacher with a daunting lead in the Championship, the German holding a perfect score of 40 points after four races. That left the German thirty points clear of second placed Gerhard Berger, meaning the Austrian racer would have to win three Grand Prix just to draw level. Behind, Damon Hill had slipped to third ahead of Rubens Barrichello, with fifteen drivers on the scoresheet.

In the Constructors Championship it had been another strong day for Benetton-Ford Cosworth, who left Monte Carlo with an eighteen point lead. Their closest challengers were still Ferrari, who left the Principality with 22 points, while McLaren-Peugeot were up to third. In truth the Anglo-French squad were level on points with Jordan-Hart, but considered ahead on count-back, while Williams-Renault had slipped to fifth.

The full entry list for the 1994 Spanish Grand Prix is outlined below:

The full qualifying results for the 1994 Spanish Grand Prix are outlined below:

The full results for the 1994 Spanish Grand Prix are outlined below:

Victory for Damon Hill brought an end to Michael Schumacher's win streak, although it made barely a dent in the German ace's Championship lead. Indeed, with Schumacher finishing second Hill still found himself 29 points shy of his rival's tally, having moved ahead of Gerhard Berger to head the chase. The Austrian himself was seven behind the Brit in third, with Jean Alesi and Rubens Barrichello completing the top five.

In the Constructors Championship, meanwhile, Benetton-Ford Cosworth had once again added to their lead, leaving Barcelona with a 21 point advantage. Ferrari were still their closest challengers, although Hill's victory had catapulted Williams-Renault back into the fight for second, moving to within eight points of the Scuderia. Williams-Renault had effectively swapped places with compatriots McLaren-Peugeot, while Jordan-Hart had retained their spot in fourth.

Retrieved from "https://f1.fandom.com/wiki/1994_Spanish_Grand_Prix?oldid=84124"
Community content is available under CC-BY-SA unless otherwise noted.