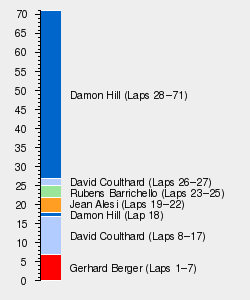 The 1994 Portuguese Grand Prix, otherwise known as the XXIII Grande Premio de Portugal, was the thirteenth round of the 1994 FIA Formula One World Championship, staged at the Autódromo do Estoril in Estoril, Portugal, on the 25 September 1994.[1] The race would see Damon Hill claim victory to close the gap at the top of the Championship to just a single point, with Michael Schumacher absent as he served the second part of his two-race ban.[1]

The fortnight between the Italian and Portuguese Grand Prix, had seen Lotus enter administration, resulting in them again hiring pay driver Philippe Adams.[1] Elsewhere, Benetton were making very little progress in restructuring their team management, with JJ Lehto in the team once again to stand in for the banned Schumacher.[1]

Qualifying would see Ferrari continue their recent run of form, with Gerhard Berger sweeping to pole position.[1] Hill, meanwhile, would claim second despite having rolled his Williams-Renault after a collision with Eddie Irvine, while David Coulthard claimed third ahead of Mika Häkkinen.[1]

The start of the race would see Berger sprint clear of the two Williams to claim the lead, while Coulthard got the jump on Hill to lead the chase.[1] Behind, the rest of the field made it through the first corner without issue, with Häkkinen and Jean Alesi squabbling over fourth.[1]

Berger's race was over soon after, however, with the Austrian racer suffering a transmission failure on lap eight.[1] Coulthard hence inherited the lead and tried to ease away from teammate Hill, although the pair would effectively run nose-to-tail right through to the pitstop window.[1]

During the Williams stops first Alesi and then Rubens Barrichello would lead the race, before Coulthard reclaimed the lead when the latter stopped.[1] By then he and teammate Hill were mired in traffic, with a mistimed lunge from the Scot on a backmarker ultimately gifting the lead to the Englishman.[1]

With that the race was effectively over, with Coulthard unable to attack Hill knowing that his teammate was in the hunt for the Championship.[1] Behind, Häkkinen and Alesi battled for third, until the #27 Ferrari went flying off the circuit and into the barriers.[1]

Hill duly swept across the line to claim victory, six tenths of a second ahead of teammate Coulthard who had shadowed his teammate throughout the second half of the race.[1] Häkkinen duly claimed third to complete the podium, with Barrichello, Jos Verstappen and Martin Brundle claiming the remaining points.[1]

With Michael Schumacher absent as a result of serving part of his two race ban, Damon Hill had done everything in his power to close the gap atop the Championship, leaving Italy eleven behind the German on 65 points. Indeed, another victory at the following race in Portuguese Grand Prix, where Schumacher would again be absent, would leave Hill just a point behind the German ace, with three races to go. Those two were now the only drivers in the hunt for the title, with Gerhard Berger instead looking over his shoulder at teammate Jean Alesi and Mika Häkkinen.

Likewise, Williams-Renault had used Schumacher's absence to carve into Benetton-Ford Cosworth's lead in the Constructors Championship, leaving Italy just twelve behind their rivals. Indeed, had David Coulthard not run out of fuel on the final lap then the Williams team would have been even closer heading to Portugal, although a one-two for the Anglo-French alliance would carry them ahead of Benetton-Ford Cosworth regardless. Elsewhere, Ferrari were still in the hunt for the Championship mathematically, while McLaren-Peugeot looked set for fourth.

The full entry list for the 1994 Portuguese Grand Prix is outlined below:

The full qualifying results for the 1994 Portuguese Grand Prix are outlined below:

The full results for the 1994 Portuguese Grand Prix are outlined below:

Damon Hill once again took full advantage of Michael Schumacher's absence to carve into the German ace's Championship lead, leaving Portugal just a point behind. Indeed, the Brit's recent run of form ensured that the two would duel for the title for the rest of the season, with Gerhard Berger too far back to challenge in third. Elsewhere, Mika Häkkinen had moved ahead of Jean Alesi to claim fourth, while David Coulthard was up into seventh.

In the Constructors Championship, meanwhile, Benetton-Ford Cosworth had finally been thrown off of top spot, having led the Championship since the opening weekend in Brazil. Williams-Renault were now the new Championship leaders, moving two points ahead of their compatriots having score a one-two in Portugal. Ferrari, meanwhile, were effectively out of the fight in third, some 31 points behind with three races to go.