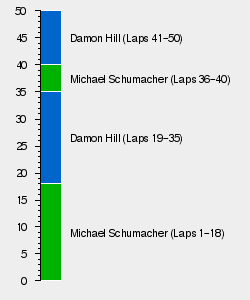 The 1994 Japanese Grand Prix, otherwise known as the XXI Fuji Television Japanese Grand Prix (XXフジテレビ日本グランプリ in Japanese) was the fifteenth and penultimate round of the 1994 FIA Formula One World Championship, staged at the Suzuka Circuit in Mie Prefecture, Japan, on the 6 November 1994.[1] Staged in incredibly wet conditions, which was a major factor in causing a red flag, the race would see Damon Hill beat Michael Schumacher to victory, leaving him a point behind the German ace heading into the season finale in Australia.[1]

The build-up to the race saw numerous seat changes, with Johnny Herbert leaving Ligier-Renault to join Benetton-Ford Cosworth, while Lotus convinced Mika Salo to race for them.[1] Elsewhere, Karl Wendlinger returned to Sauber-Mercedes, while Japanese driver Taki Inoue was handed his debut with the Simtek-Ford Cosworth squad.[1]

Qualifying would see Schumacher sweep to pole position in dry conditions, beating Hill in a straight fight.[1] Heinz-Harald Frentzen was best of the rest for Sauber-Mercedes, while Nigel Mansell got his Williams-Renault into fourth, with pressure on him to support Hill in the title fight.[1]

Rain would fall constantly on race day, meaning everyone would start on wet tyres.[1] The start itself would see Schumacher make a poor getaway, with the German instantly slithering across the circuit to block Hill into the first corner, allowing Frentzen to briefly attempt a lunge around the outside of both title contenders through turn one.[1]

Ultimately, however, Frentzen would hold back, only to try a lunge on Hill on lap two and send himself skating off the circuit.[1] That move came as the rain began to pound the circuit harder, resulting in the safety car making an appearance, albeit not before an accident had further thinned the field.[1]

The source was Herbert, who spun into the pitwall exiting the final corner, to be followed by Ukyo Katayama and Inoue a few moments later.[1] After seven laps the wreckage was cleared and the race resumed, with Schumacher still leading Hill, as Gerhard Berger dropped out with an engine failure.[1]

However, it was not long before the race was brought to a complete half, with Gianni Morbidelli flying off the circuit in his Footwork-Ford Cosworth.[1] Indeed, a huge accident had all but destroyed the Italian's car, although it was only when Martin Brundle skated into the scene and hit the marshals assisting Morbidelli that the red flag was thrown.[1]

Fortunately there were no life-threatening injuries, although one marshal was left with a badly broken leg.[1] It did, however, leave just fifteen relatively healthy cars ready to take the restart, with long negotiations between the teams required before the race could resume.[1]

The restart came behind the safety, with Schumacher pitting a few laps after the green flag was shown, handing Hill the lead.[1] The German ace would subsequently remain behind the Brit when the #0 Williams made its stop, although with the race set to be decided on aggregate times Schumacher was technically still ahead.[1]

Indeed, Benetton had gambled on the race remaining wet and running to time rather than distance, and hence had altered their plan to run a one-stop strategy.[1] This, ultimately, proved to be the wrong call, for the track would dry dramatically in the closing stages, resulting in Schumacher burning through his tyres and hence requiring another stop.[1]

That left Schumacher too far behind to challenge Hill, who duly crossed the line with a three second lead on aggregate to claim victory ahead of the German.[1] Jean Alesi, meanwhile, was almost a full minute behind in third ahead of Mansell, while Eddie Irvine and Frentzen claimed the remaining points.[1]

Since the previous round in Jerez, experienced driver, Andrea de Cesaris announced his immediate retirement from F1 after 214 races without a win. He would be replaced by JJ Lehto who had been unseated at Benetton by Johnny Herbert. Also leaving the sport ahead of this event was Frenchman, Éric Bernard, who was replaced by débutant, Mika Salo. Two other teams turned to new blood for the Japanese Grand Prix: Ligier promoted reserve driver, Franck Lagorce, to a race seat to replace Herbert, who had moved to Benetton, and Simtek hired their 6th driver of a tragic season, Taki Inoue, to their driver line-up.

Going into the event, Michael Schumacher held a five point lead over Damon Hill. Schumacher could win the World Championship by outscoring the Williams driver by five points or more. Schumacher's team, Benetton-Ford, held a slender one two point advantage over Williams-Renault: only a one-two finish could potentially secure the title in Japan, depending on other results.

The full entry list for the 1994 Japanese Grand Prix is outlined below:

The full qualifying results for the 1994 Japanese Grand Prix are outlined below:

The full results for the 1994 Japanese Grand Prix are outlined below:

Damon Hill's sixth victory of the season left the British driver just a point behind Championship leader Michael Schumacher ahead of the season finale, meaning it would be winner takes all in Australia. Indeed, if Schumacher finished ahead of the Brit that he would become the first German World Champion, while Hill had to finish fifth or higher just to overhaul Schumacher's tally. Elsewhere, Gerhard Berger was secure in third ahead of Mika Häkkinen, with the Finn set to battle with Jean Alesi for fourth.

The Constructors Championship was also to go down to the finale in Adelaide, with Williams-Renault and Benetton-Ford Cosworth separated by just five points. It was the former who held the advantage ahead of the finale, having moved ahead of the latter as a result of the battle of Japan. Various permutations could see either team win, with a one-two for either guaranteeing them the title, while Ferrari were set to finish a distant third.