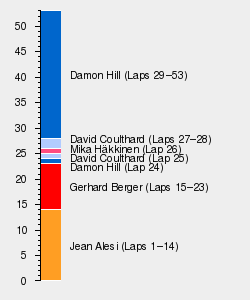 The 1994 Italian Grand Prix, otherwise known as the LXV Pioneer Gran Premio d'Italia, was the twelfth round of the 1994 FIA Formula One World Championship, staged at the Autodromo Nazionale Monza in Monza, Italy, on the 11 September 1994.[1] The race would see Damon Hill sweep to victory ahead of Gerhard Berger, as Championship leader Michael Schumacher served the first of a two race ban.[1]

The German ace had been banned for ignoring a black flag during the British Grand Prix, with Benetton having failed their appeal.[1] Furthermore, the Benetton squad themselves had agreed to make "substantial management changes" amid a deal with the FIA not to be thrown out of the Championship completely, after avoiding any sanction for their self-induced pitlane fire at the 1994 German Grand Prix.[1]

Qualifying would see Ferrari secure a front-row lockout in front of the ever passionate tifosi, with Jean Alesi ahead of Gerhard Berger.[1] There was then a surprise on the second row as Johnny Herbert got his Lotus-Mugen-Honda into fourth alongside Hill, with Team Lotus on the verge of going bankrupt.[1]

Race morning would see Berger suffer a huge accident in the warm-up, with the Austrian unable to race until he went to the local hospital for x-rays.[1] Fortunately for him he would be passed fit to race, just making it back into the circuit in time to get into the spare Ferrari for the start.[1]

Alesi duly got the better of Berger off the grid, while Herbert shot into third ahead of Hill.[1] However, as the field braked for the Rettifilo the race would be thrown into chaos, with Eddie Irvine locking up and slamming into Herbert, who duly spun across the circuit and sent cars skating into the barriers left and right.[1]

The race was stopped, cars recovered and the order reset, albeit with Herbert having to start from the pitlane in the spare Lotus, while Irvine was sent to the back of the grid having been deemed as the cause of the accident.[1] Regardless, at the second start attempt it was Alesi who again got the better launch, with Berger, just able to keep Hill at bay.[1]

Alesi soon eased clear to build a handsome lead, an advantage he would only lose when he stopped for fresh tyres and fuel on lap fifteen.[1] That, ultimately, would be that for Alesi's race, with a gearbox failure as he tried to leave the pitbox ensuring that he was out of the race.[1]

Berger hence inherited the lead ahead of Hill and David Coulthard, the two Williams-Renaults running nose-to-tail behind the #28 Ferrari.[1] Coulthard duly emerged in the lead of the race after their stops, with Berger dropping behind Hill, although as the race passed half-distance the Scot diligently moved aside for his title challenging teammate.[1]

With that the race was over, with Hill cruising home to claim his fourth win of the season and move eleven points behind Schumacher in the title hunt.[1] Coulthard, meanwhile, would be cruelly robbed of a maiden podium finish when he ran out of fuel on the final lap, gifting second to Berger, and third to Mika Häkkinen.[1]

In the days after the race it was announced that Team Lotus had entered administration, although the team vowed to complete the season.[1]

An inherited victory for Damon Hill ensured that the gap at the head of the Championship hunt came down, although the Brit was still some 21 points off the leader. Indeed, Michael Schumacher was still the overwhelming favourite to claim the title with five races to go, although with rumours of a ban growing louder, the German's lead was still vulnerable to attack. Elsewhere, Gerhard Berger was still hanging on in the title hunt, although the Austrian racer would have to win all five of the remaining races, and see Schumacher fail to score.

In the Constructors Championship, meanwhile, it had been a relatively neutral day for the Championship leaders Benetton-Ford Cosworth, although their lead had been reduced. Indeed, Williams-Renault had leapt ahead of Ferrari to claim second, and cut the gap to the leaders to 23 points, largely due to Schumacher's disqualification. Ferrari themselves, meanwhile, were now ten points further back, albeit with more than double the points of McLaren-Peugeot in fourth.

The full entry list for the 1994 Italian Grand Prix is outlined below:

The full qualifying results for the 1994 Italian Grand Prix are outlined below:

The full results for the 1994 Italian Grand Prix are outlined below:

With Michael Schumacher absent as a result of serving part of his two race ban, Damon Hill had done everything in his power to close the gap atop the Championship, leaving Italy eleven behind the German on 65 points. Indeed, another victory at the following race in Portuguese Grand Prix, where Schumacher would again be absent, would leave Hill just a point behind the German ace, with three races to go. Those two were now the only drivers in the hunt for the title, with Gerhard Berger instead looking over his shoulder at teammate Jean Alesi and Mika Häkkinen.

Likewise, Williams-Renault had used Schumacher's absence to carve into Benetton-Ford Cosworth's lead in the Constructors Championship, leaving Italy just twelve behind their rivals. Indeed, had David Coulthard not run out of fuel on the final lap then the Williams team would have been even closer heading to Portugal, although a one-two for the Anglo-French alliance would carry them ahead of Benetton-Ford Cosworth regardless. Elsewhere, Ferrari were still in the hunt for the Championship mathematically, while McLaren-Peugeot looked set for fourth.