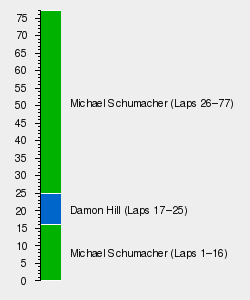 The X Marlboro Magyar Nagydíj, otherwise known as the 1994 Hungarian Grand Prix, was the tenth round of the 1994 FIA Formula One World Championship, staged at the Hungaroring near Budapest, Hungary, on the 14 August 1994.[1] The race would see Michael Schumacher claim a dominant victory for Benetton-Ford Cosworth, amid more allegations of Benetton actively circumventing the rules.[1]

Indeed, an investigation into the pitlane fire suffered by Jos Verstappen in Germany had revealed that Benetton were using a modified refuelling rig, although no official action was taken.[1] However, allegations about their use of illegal software were still rife, with many of their rivals suspecting that Benetton had done nothing to change their cars after receiving a warning after the 1994 San Marino Grand Prix.[1]

Qualifying would only serve to heighten those suspicions, with Michael Schumacher sweeping to pole position by over half a second.[1] Damon Hill was best of the rest ahead of his Williams-Renault teammate David Coulthard, while Gerhard Berger claimed fourth for Ferrari.[1]

The start of the race saw Hill get a better initial launch than Schumacher, prompting the German racer to shoot to the inside of the circuit to block the Brit.[1] Fortunately Hill was prepared for such a move and so backed off without hitting the German, with teammate Coulthard otherwise occupied trying to fend off the attentions of Berger.[1]

There would be drama in the early stages as the two Jordan-Harts contrived to hit each other, with those two also taking out Ukyo Katayama in the #3 Tyrrell-Yamaha.[1] That left Martin Brundle and Olivier Panis in the points as, up front, Schumacher eased away from Hill and Coulthard.[1]

Indeed, the race quickly settled into a procession, although Schumacher would lose the lead to Hill during the stops, opting for three stops rather than the Brit's two.[1] However, the traffic would fall almost perfectly for the German racer, who would lose little time to the Brit in-spite of making an extra stop, and hence emerged with a healthy lead once their strategies were completed.[1]

That ultimately was that for the race, with Schumacher cruising home to record his seventh victory of the season, twenty seconds clear of Hill.[1] Verstappen was the last man on the lead lap in third ahead of Brundle, classified in fourth, with Mark Blundell and Panis claiming the remaining points.[1]

There had been little change atop the Championship as a result of the German Grand Prix, with neither of the protagonists scoring points. That meant that Michael Schumacher had retained his 27 point lead over Damon Hill, with the German racer the undeniable favourite heading into the second half of the season. Gerhard Berger, had clawed his way closer to the "fight" after his first win of the season, with Jean Alesi making way in fourth.

In the Constructors Championship, meanwhile, Ferrari had carved their way back into the hunt, leaping up into second on 52 points. That meant that they would leave Germany some fifteen points behind Benetton-Ford Cosworth, while also moving nine ahead of Williams-Renault in third. Behind, McLaren-Peugeot and Jordan-Hart were still level on ten points, while Ligier-Renault had shot from twelfth, and zero points, to sixth, level with Sauber-Mercedes.

The full entry list for the 1994 Hungarian Grand Prix is outlined below:

The full qualifying results for the 1994 Hungarian Grand Prix are outlined below:

The full results for the 1994 Hungarian Grand Prix are outlined below:

Michael Schumacher had extended his Championship lead for the first time since the 1994 French Grand Prix, leaving Hungary with 76 points to his name. That meant that closest challenger Damon Hill would be 31 points behind with six races to go, meaning the Brit would have to win half of the remaining races, with Schumacher failing to score, just to get back on terms. Gerhard Berger, meanwhile, was on the verge of falling out of the fight mathematically, being 49 points behind with 60 points left to fight for.

In the Constructors Championship it had been a similar story, with Benetton-Ford Cosworth finally able to extend their lead after a run of losses during the previous few rounds. They left Hungary with 29 points in hand over their closest challengers Ferrari, with the Scuderia having failed to score. That meant that Williams-Renault had closed in in their fight for second, leaving the Hungaroring just three behind, while McLaren-Peugeot had eased away from Jordan-Hart in fourth.