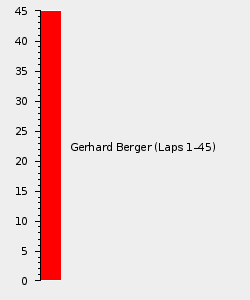 The 1994 German Grand Prix, otherwise known as the LVI Großer Mobil 1 Preis von Deutschland, was the ninth round of the 1994 FIA Formula One World Championship, staged at the Hockenheimring in Baden-Württemberg, Germany, on the 31 July 1994.[1] The race would see Gerhard Berger sweep to victory, inn afternoon that would become infamous for a huge accident at the start, and a fire in the pitlane.[1]

The weekend itself had been shrouded in controversy, with the Williams-Renault team coming under physical attack from Michael Schumacher fans, who were unhappy with the results of the British Grand Prix.[1] More significantly, however, the FIA had published the results of its investigation into the 1994 San Marino Grand Prix, which demonstrated some major irregularities with the software that Schumacher's Benetton-Ford Cosworth had used.[1]

Elsewhere, there were more rule changes enforced, with smaller rear wings, and the addition of a wooden plank, to be fitted to the underside of every single car.[1] The rather novel addition of a hard piece of wood to the underside of a carbon fibre racecar was intended to counter team's running their cars extremely low to the ground, with post-race scrutineering able to examine the board for wear.[1] Too much wear on the board would hence be grounds for a car to be excluded from the results, with restrictions on how far off the ground a Grand Prix car could run.[1]

Into the weekend itself and there would be a shock in store, with Berger and Jean Alesi securing a front-row lockout for Ferrari.[1] Indeed, it was the first time that a Ferrari had sat on pole position since the 1990 Portuguese Grand Prix, which had also been their last front-row lockout, with Damon Hill best of the rest ahead of Schumacher.[1]

The start of the race saw Berger leap away from the grid to lead teammate Alesi, while a barnstorming start from Ukyo Katayama saw the #4 Tyrrell-Yamaha streak into third.[1] Schumacher, meanwhile, would get the jump on Hill to claim fourth, only for chaos to unfold behind.[1]

The spark would be coming together of Andrea de Cesaris and Alex Zanardi, with those two pinging off one-another and into the two Minardi-Ford Cosworths.[1] At the same time, the two McLaren-Peugeots of Mika Häkkinen and Martin Brundle went three abreast into turn one with David Coulthard into the first corner, resulting in the Finn and Scot colliding, while Brundle got smashed into from behind as he jumped on the brakes.[1]

When the smoke and gravel cleared there were ten cars out of the race at the first corner, with Alesi's engine failing on the run to the Clark chicane putting him out.[1] Schumacher used his failure to leap into second, while Hill's lunge on Katayama into the Senna chicane resulted in Hill receiving suspension damage.[1]

Indeed, come the end of the opening lap there were just thirteen cars still running, with Berger leading from Schumacher, a limping Katayama, and Olivier Panis.[1] A few laps later and Katayama's race was over with a sticking throttle, before Jos Verstappen dropped out of contention in a spectacular pit-fire, leaving five mechanics and the Dutchman with minor burns.[1]

A few laps later and Schumacher was out too, an engine failure ending his race, while David Brabham and Jean-Marc Gounon dropped out later.[1] That left just eight cars on the track in the closing stages, with Berger leading the two Ligier-Renaults of Panis and Éric Bernard.[1]

That ultimately would be how the race finished, with Berger claiming his first victory since the 1992 Australian Grand Prix, and Ferrari's first since the 1990 Spanish Grand Prix.[1] Panis and Bernard, meanwhile, would hang onto their second and third places to complete the podium, with Christian Fittipaldi, Gianni Morbidelli and Érik Comas claiming the remaining points.[1]

Victory for Damon Hill saw the British racer move onto 39 points for the season, although he was still a long way off of Championship leader Michael Schumacher. Indeed, even with Schumacher failing to score, Hill was still 27 points behind the German at the halfway point in the season, and was Schumacher's only real threat for the title. Indeed, a twenty point gap then followed before Jean Alesi appeared in third, with Gerhard Berger and Rubens Barrichello completing the top five.

In the Constructors Championship, meanwhile, Benetton-Ford Cosworth had seen their lead finally reduced, having failed to score for the first time all season. Williams-Renault were now their closest challengers at the halfway point, leaving their home race with 43 points to Benetton's 67. Ferrari were next, a point behind Williams, while McLaren-Peugeot and Jordan-Hart completed the top five, level on fourteen points.

The full entry list for the 1994 German Grand Prix is outlined below:

The full qualifying results for the 1994 German Grand Prix are outlined below:

The full results for the 1994 German Grand Prix are outlined below:

There had been little change atop the Championship as a result of the German Grand Prix, with neither of the protagonists scoring points. That meant that Michael Schumacher had retained his 27 point lead over Damon Hill, with the German racer the undeniable favourite heading into the second half of the season. Gerhard Berger, had clawed his way closer to the "fight" after his first win of the season, with Jean Alesi making way in fourth.

In the Constructors Championship, meanwhile, Ferrari had carved their way back into the hunt, leaping up into second on 52 points. That meant that they would leave Germany some fifteen points behind Benetton-Ford Cosworth, while also moving nine ahead of Williams-Renault in third. Behind, McLaren-Peugeot and Jordan-Hart were still level on ten points, while Ligier-Renault had shot from twelfth, and zero points, to sixth, level with Sauber-Mercedes.

Retrieved from "https://f1.fandom.com/wiki/1994_German_Grand_Prix?oldid=84254"
Community content is available under CC-BY-SA unless otherwise noted.