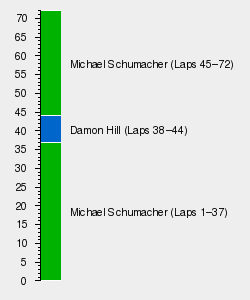 The 1994 French Grand Prix, otherwise officially known as the LXXX Grand Prix de France, was the seventh round of the 1994 FIA Formula One World Championship, staged at the Circuit de Nevers Magny-Cours in Magny-Cours, France, on the 3 July 1994.[1] The race would see Michael Schumacher secure his sixth win in seven races, managing to beat the two Williams-Renaults off the line at the start.[1]

The weekend was heralded by the return of a former Champion to the field, with Nigel Mansell returning to the paddock to take over the #2 Williams-Renault from David Coulthard.[1] Benetton-Ford Cosworth, meanwhile, would also make a change, placing Jos Verstappen back in their second car at the expense of JJ Lehto.[1]

The Dutchman would go on to have a lucky escape during Friday practice, with a heavy accident resulting a piece of his suspension scraping across the top of his legs.[1] Indeed, the suspension arm managed to tear through Verstappen's overalls, although the Benetton team were able to get the Dutchman's car repaired in time for qualifying.[1]

Qualifying would see Damon Hill beat his new teammate Mansell to pole position, ending Schumacher's run of front-row starts.[1] The German ace would, however, start the race from third, with the two Ferrari and the Jordan-Harts ahead of Verstappen in the second Benetton.[1]

Off the line at the start it would be advantage Schumacher, who instantly shot between the two Williams' to claim the lead.[1] Hill was therefore left to lead the chase, fending off a challenge from teammate Mansell, with Jean Alesi heading the Ferrari-Jordan battle.[1]

Schumacher and Hill quickly pulled clear of Mansell in third, leaving the Brit to fend off a sustained attack from Alesi for third.[1] However, there would be little change to the order in the early stages, until Mansell sparked a wave of pitstops on lap eighteen.[1]

Indeed, there would be a mix of two and three stoppers among the top ten, resulting in numerous position changes as strategies played out.[1] At the head of the field, meanwhile, Schumacher would ease clear of Hill during the pit-window, although the Brit would lead for five laps in between their stops.[1]

Once Hill made his final stop, however, the battle for victory was effectively over, with Hill slipping twenty seconds off the lead.[1] Behind, Alesi would hold third until he spun out of contention, getting wiped out by Rubens Barrichello as he rejoined.[1] That handed the position to Gerhard Berger in the sister Ferrari, who duly pitted a few moments later, leaving Mansell in third until his transmission failed.[1]

Out front, meanwhile, there would be no stopping Schumacher, who cruised across the line to claim another impressive victory, twelve seconds ahead of Hill.[1] Berger, meanwhile, would claim third after the late run of retirements, with Heinz-Harald Frentzen, Pierluigi Martini and Andrea de Cesaris claiming the remaining points.[1]

Michael Schumacher used his fifth victory of the season to once again extend his Championship lead, leaving Canada with 56 points to his name. That ensured that he held a 33 point advantage in the Championship, with Damon Hill his closest "challenger" with a third of the season gone. Best of the rest was Gerhard Berger, level on points with his teammate Jean Alesi, while Rubens Barrichello retained his spot in the top five.

It was a similar story in the Constructors Championship, with Benetton-Ford Cosworth adding to their lead at the head of the field. Indeed, their gap over second placed Ferrari now stood at 25 points, with the Italian squad themselves looking over their shoulders at Williams-Renault. The defending Champions left Canada just seven behind the Scuderia, with Jordan-Hart and McLaren-Peugeot losing ground behind.

The full entry list for the 1994 French Grand Prix is outlined below:

The full qualifying results for the 1994 French Grand Prix are outlined below:

The full results for the 1994 French Grand Prix are outlined below:

Michael Schumacher's sixth win of the season ensured that the German racer left France with an ever enhanced lead, moving onto 66 points for the season. Damon Hill was still the closest thing the German had to a pretender, although the Brit left France 37 points behind, meaning he would need four race wins just to catch up. Gerhard Berger, meanwhile, had solidified his grip on third, with Jean Alesi and Rubens Barrichello retaining their top five status.

In the Constructors Championship, meanwhile, it was still advantage Benetton-Ford Cosworth, who left France with their tally inflated to 67 points. Ferrari remained their biggest threat, although with some 31 points between the top two it seemed as if it was already Benetton's Championship to lose. Williams-Renault, meanwhile, had inched closer to their Italian rivals, sitting just five behind, with Jordan-Hart and McLaren-Peugeot completing the top five.