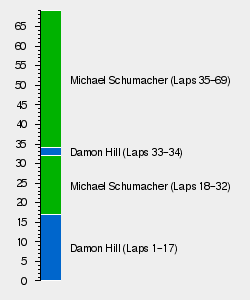 The 1994 European Grand Prix, otherwise known as the XXXIX Gran Premio de Europa, was the fourteenth round of the 1994 FIA Formula One World Championship, staged at the Circuito de Jerez in Jerez de la Frontera, Andalucía, Spain, on the 16 October 1994.[1] The race would see Michael Schumacher claim victory in his return to the Championship, having been forced to sit out the previous two rounds due to a ban for ignoring black flags at the 1994 British Grand Prix.[1]

There were several sweeping changes in the field ahead of the battle of Europe, with Schumacher returning to Benetton-Ford Cosworth, while Nigel Mansell reclaimed the second Williams-Renault seat in place of David Coulthard.[1] Elsewhere, Lotus lost their lead driver Johnny Herbert to Ligier-Renault, and hence hired Éric Bernard in his place, with the team beginning to lay off their background staff as they desperately sought a buyer.[1]

Qualifying would see Schumacher demonstrate that his skills had barely been blunted, with the German ace sweeping to pole position.[1] His main title challenger Damon Hill secured second, while Mansell secured third ahead of Heinz-Harald Frentzen.[1]

The start saw Hill get a better launch than Schumacher, surging ahead of the Benetton to claim an early lead.[1] Mansell, meanwhile, would tumble down the order and to the back of the top ten, leaving Frentzen in third ahead of Rubens Barrichello and Gerhard Berger.[1]

Hill and Schumacher quickly pulled clear of the #30 Sauber-Mercedes, with the title protagonists running nose-to-tail but not fighting.[1] Behind, Mansell battled his way back up into fourth behind Frentzen, but would find himself unable to make further progress.[1]

Indeed, Mansell soon slipped back behind Barrichello, and in his attempts to re-pass the Jordan-Hart for a second time managed to damage his nose.[1] Out front, meanwhile, Schumacher would get the jump on Hill during the stops, although the Brit remained in the German's mirrors.[1]

The fight for the win was over from that point on, with Schumacher soon able to break away from Hill before the second round of stops.[1] Behind, Frentzen's one-stop plan backfired as his pace collapsed, leaving Mika Häkkinen and Eddie Irvine to fight for the final spot on the podium.[1]

The Häkkinen/Irvine fight would rage until the closing stages of the race, when Irvine's tyres began to fade.[1] Elsewhere, Barrichello would drop out of contention with a puncture, while Mansell spun out of the race while trying to get on terms with fifth placed Gerhard Berger.[1]

With that the race was run, with Schumacher cruising across the line ahead of Hill to extend his Championship lead to five points.[1] Häkkinen was over a minute behind to complete the podium ahead of Irvine, while Berger and Frentzen claimed the remaining points.[1]

Damon Hill once again took full advantage of Michael Schumacher's absence to carve into the German ace's Championship lead, leaving Portugal just a point behind. Indeed, the Brit's recent run of form ensured that the two would duel for the title for the rest of the season, with Gerhard Berger too far back to challenge in third. Elsewhere, Mika Häkkinen had moved ahead of Jean Alesi to claim fourth, while David Coulthard was up into seventh.

In the Constructors Championship, meanwhile, Benetton-Ford Cosworth had finally been thrown off of top spot, having led the Championship since the opening weekend in Brazil. Williams-Renault were now the new Championship leaders, moving two points ahead of their compatriots having score a one-two in Portugal. Ferrari, meanwhile, were effectively out of the fight in third, some 31 points behind with three races to go.

The full entry list for the 1994 European Grand Prix is outlined below:

The full qualifying results for the 1994 European Grand Prix are outlined below:

The full results for the 1994 European Grand Prix are outlined below:

Victory for Michael Schumacher upon his return ensured that the German racer left Jerez with an enhance lead in the Championship, moving five clear of Damon Hill. That meant that victory in Japan, combined with Hill failing to finish higher than third, would see the German ace claim the title. Hill, meanwhile, would likely have to beat Schumacher in Japan in order to maintain realistic hopes of challenging at the season finale in Australia.

In the Constructors Championship, meanwhile, it was Benetton-Ford Cosworth who emerged from Jerez in the lead, moving two points clear of Williams-Renault. That four point swing ensured that the British squad could claim the title in Japan, if they claimed a one-two, with the two Williams only managing a point between them. Those two were now the only teams in the title fight with two races to go, with Ferrari set to finish in a lonely third.