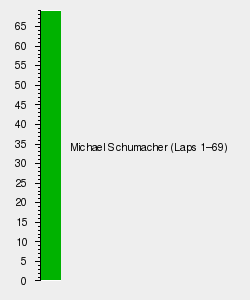 The XXXII Grand Prix Molson du Canada, otherwise known as the 1994 Canadian Grand Prix, was the sixth round of the 1994 FIA Formula One World Championship, staged on the 12 June 1994 at the Circuit Gilles Villeneuve in Montreal, Quebec, Canada.[1] The race, which was the first to feature restrictions on what fuel teams could use, would see Michael Schumacher claim his fifth win of the season, and second Grand Chelem, for Benetton-Ford Cosworth.[1]

Prior to the weekend new rules regarding cockpit safety were enforced, with teams making last-minute changes as they arrived in Canada to ensure their cars were legal.[1] Arguably the biggest change, however, would be a restriction in fuel, with all teams now required to use fuel equivalent to that used by road cars, a method of restricting engine power.[1]

Those changes almost produced a shock result in qualifying, although Schumacher eventually emerged on pole position, his third in a row.[1] However, the German ace only just beat the two Ferraris of Jean Alesi and Gerhard Berger, who suddenly found themselves on the pace and ahead of Damon Hill in the first of the Williams-Renaults.[1]

The start of the race saw Schumacher ease ahead of Alesi and Berger, while rookie David Coulthard swept past teammate Hill to claim fourth.[1] There was more action further back as Gianni Morbidelli gained a handful of places, with everyone making it through the first corner without issue.[1]

The top three would quickly space out from one another, while Hill was desperate to try and get on terms with the Ferraris, but found his way blocked by Coulthard.[1] Indeed, the young Scot would put up a stubborn defence from his teammate, with the pair fighting hard until lap nine, when Hill finally made a move stick.[1]

The Englishman quickly sprinted clear of the Scot, leaving Coulthard to slip into the clutches of Rubens Barrichello and Mika Häkkinen behind.[1] Hill, meanwhile, would quickly hunt down and pass Berger, passing the Austrian on lap fifteen, before charging off after Alesi.[1]

Rain began to fall as the pitstops loomed, with Eddie Irvine spinning down the order with a slow puncture.[1] Yet, none of the drivers would take wet tyres, the rain soon disappearing, with Hill getting the jump on Alesi, while Häkkinen leapt ahead of Coulthard and Barrichello.[1]

Out front, meanwhile, Hill would have no answer to Schumacher, the Brit simply unable to significantly carve into the German's lead.[1] Behind, meanwhile, the second half of the race would be dominated by the scrap for fourth between Berger and Häkkinen, only to be settled int he closing stages when the Finn's engine blew apart.[1]

With that the race was run, with Schumacher sweeping across the line to claim victory, and his second career Grand Chelem having led every lap and set fastest lap.[1] Hill and Alesi completed the podium ahead of Berger and Coulthard, while Christian Fittipaldi was classified in sixth, only to be disqualified for being underweight.[1] JJ Lehto therefore inherited the final point for Benetton-Ford Cosworth.[1]

Victory for Damon Hill brought an end to Michael Schumacher's win streak, although it made barely a dent in the German ace's Championship lead. Indeed, with Schumacher finishing second Hill still found himself 29 points shy of his rival's tally, having moved ahead of Gerhard Berger to head the chase. The Austrian himself was seven behind the Brit in third, with Jean Alesi and Rubens Barrichello completing the top five.

In the Constructors Championship, meanwhile, Benetton-Ford Cosworth had once again added to their lead, leaving Barcelona with a 21 point advantage. Ferrari were still their closest challengers, although Hill's victory had catapulted Williams-Renault back into the fight for second, moving to within eight points of the Scuderia. Williams-Renault had effectively swapped places with compatriots McLaren-Peugeot, while Jordan-Hart had retained their spot in fourth.

The full entry list for the 1994 Canadian Grand Prix is outlined below:

The full qualifying results for the 1994 Canadian Grand Prix are outlined below:

The full results for the 1994 Canadian Grand Prix are outlined below:

Michael Schumacher used his fifth victory of the season to once again extend his Championship lead, leaving Canada with 56 points to his name. That ensured that he held a 33 point advantage in the Championship, with Damon Hill his closest "challenger" with a third of the season gone. Best of the rest was Gerhard Berger, level on points with his teammate Jean Alesi, while Rubens Barrichello retained his spot in the top five.

It was a similar story in the Constructors Championship, with Benetton-Ford Cosworth adding to their lead at the head of the field. Indeed, their gap over second placed Ferrari now stood at 25 points, with the Italian squad themselves looking over their shoulders at Williams-Renault. The defending Champions left Canada just seven behind the Scuderia, with Jordan-Hart and McLaren-Peugeot losing ground behind.