Formula 1 Wiki
Register
Don't have an account?
Sign In
Advertisement
in: 1994 Grands Prix, British Grand Prix, Formula One races in the United Kingdom 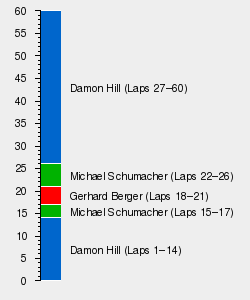 The 1994 British Grand Prix, otherwise officially known as the XLVII RAC British Grand Prix, was the eighth round of the 1994 FIA Formula One World Championship, staged at the Silverstone Circuit in Northamptonshire, UK, on the 10 July 1994.[1] The race would see Damon Hill secure a popular victory, as Michael Schumacher was disqualified during the race for failing to serve a stop-go penalty.[1]

Qualifying had seen Hill and Schumacher fight for pole position, although their fight would feature an interloper in the form of Gerhard Berger.[1] Ultimately, however, it was the Brit in the #0 Williams-Renault that won the truel, with Hill on pole ahead of Schumacher and Berger, with 0.020s covering the trio.[1]

There would be some very early drama, however, with David Coulthard stalling on the formation lap, while Eddie Irvine saw his engine boil on the grid.[1] Furthermore, Schumacher would twice overtake Hill, once off the grid and later around the lap, with the officials immediately announcing an investigation of the incidents.[1]

When it came to the start itself there would be an immediate failure for Martin Brundle, whose engine detonated the moment he hit the throttle.[1] Regardless, the rest of the field would sprint away from the grid and avoid the McLaren-Peugeot, with Hill leading the charge into Copse.[1]

The race quickly settled down into a procession, with the only interest of note being Coulthard's slow progress from the back of the field.[1] That was, until Schumacher was slapped with a five second stop-go penalty for his actions on the formation lap, although the Benetton-Ford Cosworth squad refused to bring the German in.[1]

Indeed, it was only after Race Director Roland Bruynseraede went to the Benetton pits himself that the British squad served Schumacher's penalty.[1] He duly swept in to serve the penalty on lap 28, some 14 laps after it had been issued, having grabbed the lead from Hill during the pitstops.[1]

The German ace rejoined in fourth, although he swiftly clawed his way back up to second and charged away after Hill.[1] Behind, Berger was left in a solid third until he suffered an engine failure, leaving Rubens Barrichello on the final step of the podium, albeit with Mika Häkkinen bearing down on the Jordan-Hart.[1]

Their impending battle would finally last through to the final lap, with Häkkinen sweeping past, only for Barrichello to try and respond.[1] The pair duly clashed at Luffield and went skating into the gravel, with Häkkinen dragging himself out of the gravel to claim while Barrichello crawled into the pitlane on three wheels.[1]

Out front, meanwhile, Hill cruised home to claim his victory on home soil, with fastest lap and pole also earning him a maiden Hattrick.[1] Schumacher finished second but was disqualified for failing to serve his penalty in time, meaning Jean Alesi claimed second ahead of Häkkinen's battered McLaren and Barrichello's three wheeled Jordan.[1]

Michael Schumacher's sixth win of the season ensured that the German racer left France with an ever enhanced lead, moving onto 66 points for the season. Damon Hill was still the closest thing the German had to a pretender, although the Brit left France 37 points behind, meaning he would need four race wins just to catch up. Gerhard Berger, meanwhile, had solidified his grip on third, with Jean Alesi and Rubens Barrichello retaining their top five status.

In the Constructors Championship, meanwhile, it was still advantage Benetton-Ford Cosworth, who left France with their tally inflated to 67 points. Ferrari remained their biggest threat, although with some 31 points between the top two it seemed as if it was already Benetton's Championship to lose. Williams-Renault, meanwhile, had inched closer to their Italian rivals, sitting just five behind, with Jordan-Hart and McLaren-Peugeot completing the top five.

The full entry list for the 1994 British Grand Prix is outlined below:

The full qualifying results for the 1994 British Grand Prix are outlined below:

The full results for the 1994 British Grand Prix are outlined below:

Victory for Damon Hill saw the British racer move onto 39 points for the season, although he was still a long way off of Championship leader Michael Schumacher. Indeed, even with Schumacher failing to score, Hill was still 27 points behind the German at the halfway point in the season, and was Schumacher's only real threat for the title. Indeed, a twenty point gap then followed before Jean Alesi appeared in third, with Gerhard Berger and Rubens Barrichello completing the top five.

In the Constructors Championship, meanwhile, Benetton-Ford Cosworth had seen their lead finally reduced, having failed to score for the first time all season. Williams-Renault were now their closest challengers at the halfway point, leaving their home race with 43 points to Benetton's 67. Ferrari were next, a point behind Williams, while McLaren-Peugeot and Jordan-Hart completed the top five, level on fourteen points.